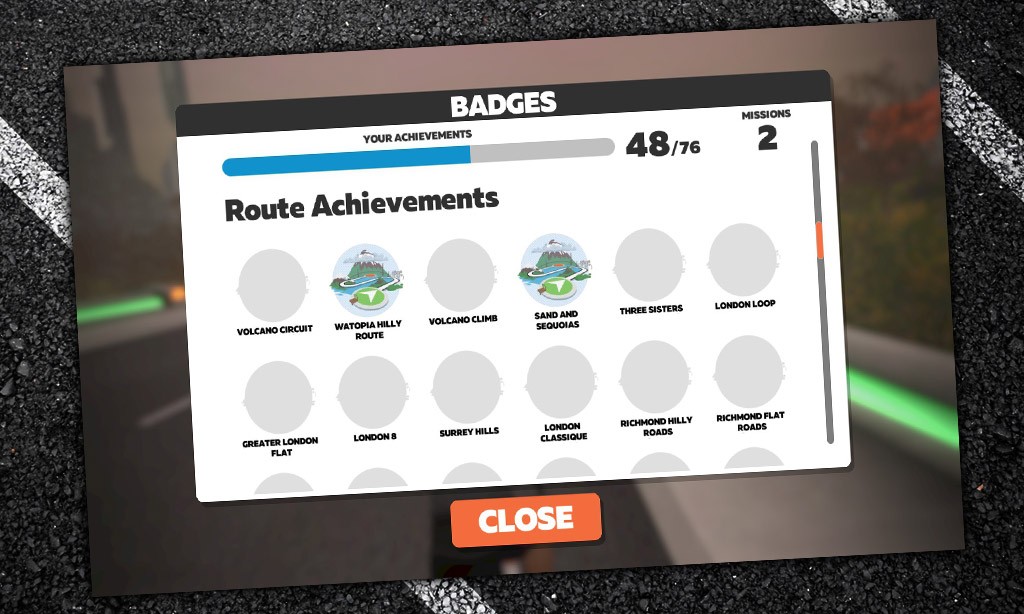 We’re adding the achievement badge XP to our master list of Zwift routes.

Included in Zwift’s recent update are some new carrots that should encourage us all to explore Zwift’s long list of routes.

To get the badge, ride the route in a free ride (including workouts) or event. Important note: you don’t get badges for manually navigating a route. You must select it from the routes list, or ride it in an event.

There’s been some confusion about where certain routes actually end (see comments on this post for examples). The best approach is to assume that your lap doesn’t start until you ride through a banner of some sort, and it won’t end until you ride through a banner (typically the same banner you began with). There may be some exceptions, but this seems to be the rule for almost all routes.

Do not simply ride the distance stated for the route and assume you’re done. Nearly every route has a lead-in section which can be up to a few miles long, so if you don’t see the achievement pop up, keep riding!

How do you know when you’ve received the badge? Here’s a route badge that popped up yesterday while my butt was getting kicked in a BRT Criterium race:

Each route has an XP bonus attached, and the amount of XP is based on the length of the route. See each route’s specific XP above.

Our buddy Shane Miller did a quick video on these new achievements–watch it below:

Shane alludes to a Zwift UI foible which has become more apparent with these new route badges.

What do I have to restart the game to pick a different route?

This is something Zwifters have been requesting for years. When starting up the game takes 2-3 minutes on a computer, it feels silly to reboot Zwift every time I want to change routes. Let me pull up the route screen and pick a new route!

We announced the Route Hunter leaderboards earlier this week. These rank riders by how many routes they’ve completed, plus their time in completing the route. Want to push your Zwift exploration to new heights? Check it out!

I like carrots, so this addition is a welcome one. What about you? Will the badges push you to explore other routes and/or ride a bit more?

And you can get them by running, too.

I just made some calculations… basically XP points are awarded by distance… around 20XP per kilometer of distance, no matter the elevation.

I don’t think every route is included still. I don’t see Time Trial Lap of Bologna or route of new Crit City.

Correct, no event-only routes included. Only routes you could free-ride if you wanted to.

So does really EVERY selectable route give a badge after completing? Im counting 30 Watopia and 5 Innsbruck routes right now. Thanks for answer

Yes, as long as you’ve got the update released on Friday (still waiting for iOS update to drop).

Eric, will you be updating this list? Don’t suppose you have a google sheet with them all listed? Thanks for all your hard work that saves us the hassle!

I’m actually going to add an XP column to this page: https://zwiftinsider.com/routes/ — working on it now

Today I rode the uber pretzel and I die get pop up and ep but no badge in the menu:-(

London PRL full is working fine. Thought I would give a heads up in case people wanted confirmation before attempting the 173km route.

Thanks so much for all your effort!
Been zwifting now for just over a month and your work has been a great help getting me started.
Much appreciated!!!

Did we already confirm start/end point for the mega pretzel considering it does not start/end with finish banner?

This is pretty cool and as an avid gamer that goes after achievements (and beer drinker doing the same thanks to Untappd), this helps keep me engaged. I have 1 ‘add-on’ request here. If you could also show I’ve received the badge on the “select route screen” then that would (sadly?) help me choose what additional routes I need to do if I want more badges *or* even just to confirm if I had even completed said route I would happily accept that! I was looking for what route to do in the AM and couldn’t recall which ones I… Read more »

Oh dear god. The high line. Have to go up the KOM twice to get it. Only wanted a quick 10k spin!

I started this route (HIghland) thinking the same thing about a 6 mile ride and rode over 8 miles. I even passed through the KPM start again. Had no idea I had to go up that beast again. I just stopped thinking I did something wrong (only been Zwifting for 2 weeks). So really it’s not 6 miles?

Read the info about the start/finish here: https://zwiftinsider.com/the-highline/

There’s a long lead-in before the route actually starts–so yeah, you’ll have to ride more than 6 miles.

That exact thing happened to me yesterday!!

For those asking for a list of routes you have completed.
Why not do what I did? 🤔

I opened up Zwift on my pc, then went to the garage n copied the badges, by cut n paste, onto a word doc.

Printed it out n placed next to my trainer.

Each time I do a route I cross it off with a big red X.

For those that are complaining about knowing what route they need to ride.

Do what I did to make it easier.

Went on Zwift on the PC. Went to badges in the garage n copied the page and pasted on to a word doc till I had all routes copied. Edited with crop to look good. Printed out.

Placed next to my trainer and each time I complete a route I cross them off with a big red X.

Bit annoying that you can’t achieve by free riding. Annoying that i have to select then ride a route and finish the ride then exit and start a new route to get the achievement on a different route.

I think it’s a glitch though, as I got the CCW one, rode a little further then did a u-turn to go the other way and got the CW badge straight away.

Eric not sure if you already have this information but just completed Mega Pretzel and is 2140 xp. It ends right where it starts at the volcano exit to Italian Village

Do you have a post about all the extra route achievement badges that zwift added recently?

This page lists every route on Zwift, including badge XP: https://zwiftinsider.com/routes

I rode Muir and the Mountain last night complete without any route changes and can verify this feature doesn’t work yet. Hope they fix it, fingers crossed.

Previously, I got XP if I completed the route in a workout.
However, due to recent updates, workouts do not seem to give XP for completing the route.

I finished the route, I respected the whole route and all these badges were not opened in the menu .. YorkNew York .. Eveytghing Bagel

Careful with group ride locked routes. If you start late it may bump you past the start with the fwd group of riders negating your chance at the badge (unless you ride it twice!)

I’m trying to get the ride a lap for 14 days badge. Yesterday I only did the innsbruck stage of the tour of zwift. Does that mean I will have to start again?

It worked for me with the tour de zwift stages, so it should not be a problem. As long as you completed the routes 😉

For the volcano circuit and alpe du zwift badges, do they have to be done in the same ride, or are they cumulative?

Volcano Circuit is all in one go. Alpe is cumulative.

I did knickerbocker reverse today, it says I did it on Strava but I didn’t get the achievement badge. Don’t really want to do it again if I can help it. Any way that this badge can be awarded to me please?

I have 4 routes completed the last days, confirmed in the companion app, but no badges. it was a fun activity, but it does not seem to be working properly at the moment.

start and finish points… when you preview the route there is an animation. blue line is lead in, white line is the actual route and distance

Add Surrey Hills to this list of segments that need updating – Start and finish at top of Fox Hill.

I only joined Zwift last month (January 2020). I promptly started doing these routes (to get the badges, to get the XP bonuses, to unlock bikes and the Alpe faster). The XP from these badges help A LOT in levelling up more quickly… getting to level 12 would be a massive grind without them (especially since I’m on the slow side as a rider)… I didn’t realize that these badges were only in existence since October!

Small complaint: Not really a small complaint. You should be able to pick another ride without exiting the app. Really?!

Start to finish: I selected a route of 8+ miles only to find out it started 6 miles away at the TOP of the hill. I’d like to see a race event where they have all the riders ride to the start line almost as far away as the whole race. How can it not be programmed to start you at where you are going to start your route. It’s frustrating determining where the end of the route is. I like to graphics, resistance, etc.. but ticked that I can’t achieve goals that don’t account for extra miles and height.