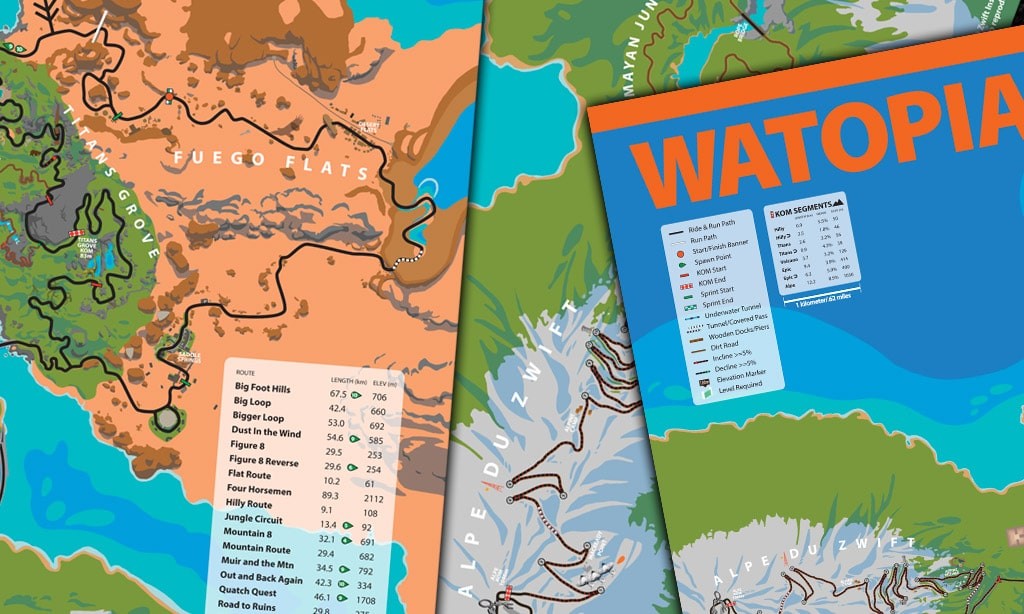 Here is the latest version of the Watopia map created by myself and posted for the Zwift community. My goal is to create a useful reference which also looks good hanging on the pain cave wall.

You are free to print it for your personal use or support my efforts by purchasing an affordable full-size poster print.

This page will continue to be updated as I enhance the map and Zwift HQ updates Watopia.

This is awesome- but is there any chance you could convert it to a full size/resolution desktop wallpaper image file? Ride on!

I opened it in a PDF reader, then exported it as PNG. Aspect ratio is a little off, but it doesn’t look to bad when stretched to fill a 16:9 screen.

Thanks for the great map. I enjoy it a lot. One question/comment: if I remember correctly, the start point of mountain 8 route is somewhere near point 5 and not point 4.Do I miss it completely? I will appreciate clarifying…

CAFE STOPS INSIDE ZWIFT!
Hi Zwift, how about adding some cafe stops. So we can in game stop, hangout, go pee, automatically pause all current ride stats, then resume when we are fuelled up and ready to drop the hammer home.

This is legitimately a great idea and I hope someone there actually listens to it.

Hi Eric, I understand this is an old post but: is there any way to have a personal watopia heatmap i.e. a map that shows all the routes that a rider has done in watopia (or any other zwfift world), like a strava heatmap?

Hi Eric, I have ordered this on 4/30, to be shipped to the Netherland. I haven’t received it yet, and even though I understand these are hard times due to COVID, I would still like an answer to my emails, where I ask about the status. Keep up the good work, I love this site, and I look forward to getting my map too :)))

Do you do a version that shows miles and feet instead of km and metres?

Not at this time.

Any plans for it? I would like a version with imperial units as well.

Yes, because Zwift lowered the requirements a few months back (after we had already printed up our posters) and they said it was probably a temporary thing…

Superb… You think there is any chance that some more maps will be available in the Watopia style. Would like to beef up my pain cave

Hi Eric I did the download but want to donate $$ and keep downloading updates instead of $20 ship?) bought one in the past but with the updates figure intermittent donation and I may have it either on another screen or smaller pint or who knows. I’ll throw $20 for first one then $10 or maybe you want an easy click for $5 donation in general and “free but $5 donation appreciated” (I’m saying this for me but also as an overall strategy for you I guess.

Any ETA on the new connecting roads? I was about to order a poster but might wait for the update

Hey there. I like the map, but I just wanted to point out that the red and green gradient arrows are a bit confusing, and I think some of them point the wrong way. I have done many maps, and when using symbols to indicate steep gradients, why not just use a series of arrows pointing uphill (or downhill, but i think for cycling the climbs are more important), and don’t worry about the opposite direction, it will be obvious. So like the red triangle on the climb symbol, repeated, without the lines. I think that might make it clearer.… Read more »

I sometimes mix up the ascent and descent indications. Why not just display in the direction of the downhill with an arrow, and use different colors or shapes to differentiate the tilt: from 5% to 10% and a second for slopes greater than 10%.

Thanks for designing the fantastic poster. I ordered a copy via a local printer. Just received and realised, is the scale correct at the bottom of the map? Seems a bit off for 1km?

Thanks again for all the amazing work.