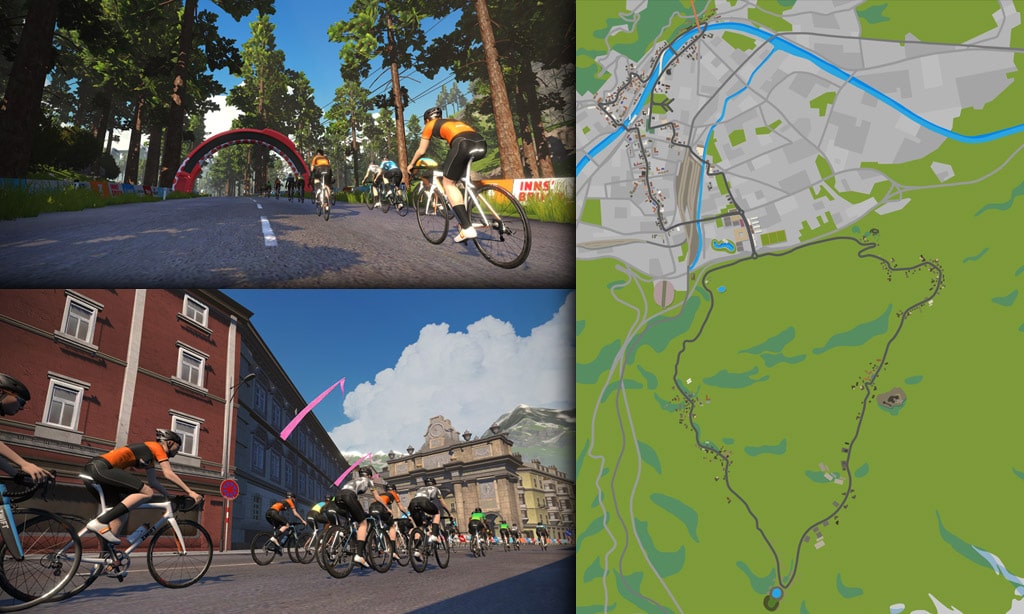 This page includes route maps and basic details for all Zwift routes on the Innsbruck course.

Innsbruck’s flagship route is actually just a portion of the 2018 UCI Worlds course which was raced in September 2018.

It begins in Innsbruck on a flat road which crosses the Sill River then heads beneath the Inntal Autobahn overpass before hitting the big climb. At 7.4km (4.6 miles) with an average grade of 5.4%, the Innsbruck climb is similar to Watopia’s Epic KOM in terms of difficulty.

Enjoy the descent, but don’t rest too much: you’ve still got a sprint coming! Head back into town and see if you can make the leaderboard for the sprint along the Inn River (the town’s namesake) before crossing the finish line.

At the UCI Worlds race, the men’s elite racers began in Kufstein and ride 84.7km to Innsbruck, where they covered this circuit 7 times. And if that wasn’t painful enough, the final circuit (not part of the Zwift’s Innsbruck course at this time) was a modified one which included an additional climb featuring 25% gradients! Spain’s Alejandro Valverde won the 2018 UCI Worlds Elite race from a final pack sprint of four riders. See the finish >

“Achterbahn” is German for rollercoaster, but this challenging route is a lot more work than any rollercoaster you’ve ever taken. Covering all Innsbruck roads in both directions, this figure 8 route is almost 20km longer than Watopia’s Figure 8, with 4x the elevation gain!

This is the longest route in Innsbruck. It begins at the start/finish line, but takes you over the steep reverse KOM first, then over the forward KOM before ending at the start/finish. Along the way you’ll hit the sprint next to the Inn river in both directions.

“Innsbruck KOM After Party” is an event-only route on Zwift, meaning it is only available for use in events–it cannot be ridden on a freeride or individual workout.

In terms of profile, this ride is essentially ~30km (18 miles) of flat followed by a solid climb up the Innsbruck KOM. This makes for exciting race possibilities as riders with more pure power work to drop climbers in the early flat portion, while climbers claw back time on the final KOM.

We begin with three laps of Innsbruckring. This portion is quite flat, except for the famed “Leg Snapper” climb which is short but steep enough to really hurt in a multi-lap race.

Innsbrucking is the flat(ish), “in town” portion of the Innsbruck course. Beginning and ending at the start/finish banner, this route makes a great crit race course thanks to the “Leg Snapper”, a 450m long, 8% climb located around 5km from the start. This hill forces an attack every lap. Save your feather power-ups!

Additionally, this route includes a sprint segment which begins just after descending from the Leg Snapper. Give it all you’ve got, and grab that green jersey!

Innsbruck’s “Lutscher” (German for lollipop) is a lollipop route, meaning you have a lead in then one or more circuits to ride. The route begins at the start/finish banner then places you on the KOM loop for as many laps as you can handle. With Innsbruck’s steep climbs this means you can pack in a lot of climbing if you wish!

There are two Lutscher routes: the standard one and a reverse one (“Lutscher CCW”). The official routes end after you cross the KOM banner for the second time.

We have also created verified Strava segments for the KOM loop in both directions.

Congratulations on the accurate distances and elevations for Lutscher (& CCW). I was a little disappointed but not terribly surprised when I didn’t get course credit after only one lap to the KOM start. I believe the Zwift description only has the elevation and distance per lap. .

UCI World for innsbruck is a bit off, unless i missed something. I ended up doing 16.8 miles and over 2600 feet of climbing on my adventure. Could be it dropped me off quite a way before the actual start.
Regardless, your site is pretty comprehensive and well organized. Thanks you.

Disregard! Just looked at my route in Strava, and apparently I got routed twice around the loop, and never made the turn to return to town.