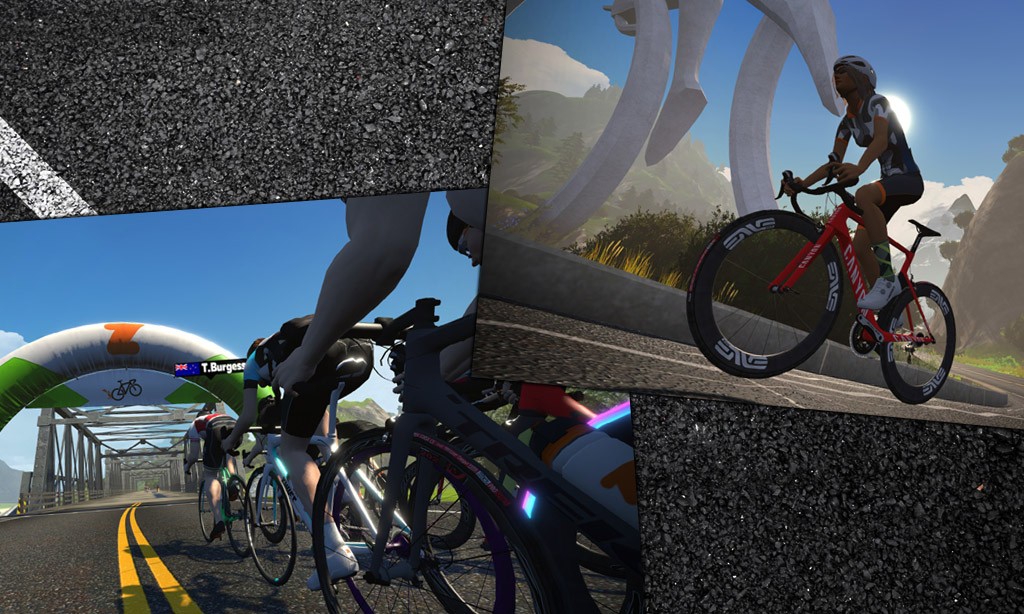 Watopia’s “Figure 8” route covers the entire hilly and flat routes in both directions. If you’re looking for a ride around an hour long that includes some short climbs and a nice mix of flats and rollers, this is a solid choice.

This route is popular with racers since its nice mix of punchy climbs, flats, and rollers keep the race interesting and allow for strategic attacks from a variety of riders.

Starts and ends at the downtown Watopia start/finish banner. Lead-in to start is minimal.

See Upcoming Events
on This Route >

Despite this route’s two KOMs, aero is the clear choice. Use the most slippery frame and wheelset in your garage.

Begin in downtown Watopia and head out Ocean Boulevard for a nice flat warmup before the first climb. Enjoy the ocean tunnel, wave to the whale, then head up to dry land for a dusty trip through the fishing village and a short, snaking climb up to Watopia’s main “Hilly Route”.

You’re now on the Hilly Route in the reverse direction. You’ll cross the 360 Bridge then pass Hank’s Gas Station, where the reverse KOM begins. Give that first pitch a good hard kick, then try to hold some speed for the rest of the climb, which isn’t nearly as steep.

Drop down from the KOM banner, ride through downtown Watopia again, then it’s over the Esses and a quick descent onto the timed reverse sprint over the JWB (Julynn Washington Bridge).

Catch your breath after the sprint as you hit the cobbles of the Italian Villas, then turn right and head down the snaky descent to the fishing village once more. You’re on Ocean Boulevard, but in the reverse direction. As you climb out of the ocean tube, take a deep breath and get ready: the forward KOM is just up the road!

The forward KOM is shorter and steeper than the reverse. Go as hard as you’d like, keep that power up over the flat top, then enjoy your descent. You earned it!

Over some rollers and past the noisy waterfall you’ll ride through the Italian Villas once more, hit the forward sprint section, cross the JWB, then hit the short, straight kicker into the Esses.

Keep your speed up through the Esses by modulating your power just right, then it’s one final kick to the finish in downtown Watopia. You did it!

Here’s a video tour of this popular race route:

Eric , for the badge achievement do i chose a traditional Figure 8 and then immediately do a u-turn? Or do I cross the banner and then click u-turn? Thank you!

Why turn at all? Just choose the Figure 8 route then ride!

I just completed Figure 8 Reverse and unlocked the badge, but it’s not showing up on Veloviewer after pressing the update button. Weirdly, also Strava is saying no segments on this activity.

Would like to see the routes in the Veloviewer animated so that the directions could be planned.

They actually are, if you look close. But it’s a subtle effect.

I love the format. It really gives much note useful information. Particularity, the animated map.
One improvement might be if the dot would stop when it reached the end of the route instead of continuing for another lap. That would avoid confusion about where the route ends and how many times around it might go.
Thanks for all the work you do that makes the zwift experience better!

I’d like to see the start/finish highlighted on the map.It’s the first map I see on the page, and I may not scroll down to the other maps.
Separately, it would also be nice if the KOM and sprint start and finish points were indicated. One of my ongoing frustrations with sprints (and this is for Zwift in general, not this site) is that I don’t have any indication of where they start until I’m pretty much right on top of the start marker.

Love it, nicely layed out, bike choice adisory is a big plus.

Really appreciate the start and finish information. Have had too many times where I did a route but did not complete it because I did not know where the finish was.

Save & Accept
10
0
Would love your thoughts, please comment.x
()
x
| Reply
Comment Author Info
You are going to send email to