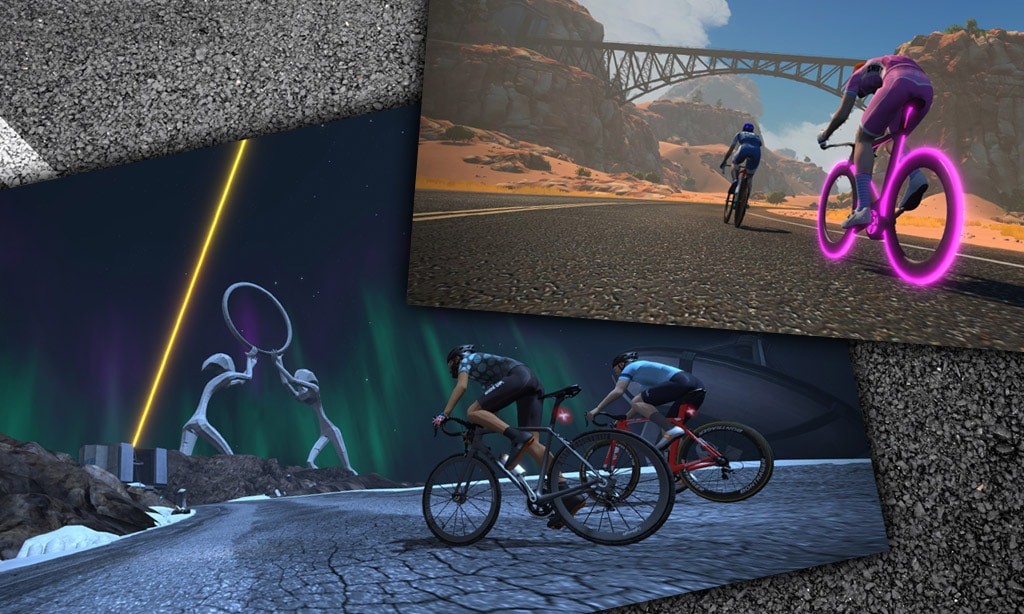 First came The Pretzel at 72km long and 1,333m of elevation. Then the Mega Pretzel arrived, 107km long with 1,642m of elevation. Now there’s a new king of the hill: “The Über Pretzel”.

Released as part of Zwift’s Fuego Flats desert expansion, this route covered every bit of tarmac available in Watopia at the time of its release – sometimes in both directions. It is most similar to the Mega Pretzel, but adds the Fuego Flats desert roads, the Radio Tower climb, and an Alpe du Zwift finish. Wow!

Beginning in downtown Watopia, you head straight for the Epic KOM. Once you cross the banner you’ll hang a left for the cursed Radio Tower climb, then it’s a quick descent to a left turn onto the jungle route.

Complete one Jungle Circuit lap and head over to the Volcano for a trip to the top. Then it’s down the Volcano, over the Esses, and zig-zagging our way to Fuego Flats in a reverse direction.

We drop down from Fuego Flats onto Ocean Boulevard, then hit the Hilly KOM reverse and back onto Fuego Flats in a forward direction. Once we hit Ocean Boulevard again we head back to Watopia’s city center, then make our way out to the final section of this route: Alpe du Zwift. Enjoy!

You must be level 12 or above to access The Über Pretzel in a free ride. Alternatively, you can join a group ride or Meetup held on this route–but Über Pretzel group rides are exceedingly rare.

Does anyone know what happens when you keep going after the Alpe finish? In terms of navigation, that is.
I’m planning on riding a double Uber Pretzel, but I’m not sure what the Zwift navigation defaults to, once a non-looping round is complete.
Ultimately, I don’t want to have to navigate and keep going in the hope it will take me back to the Downtown start/finish and back through the selected route.

im doing it in the morning so ill.let you know as i want to continue to 100 miles if i have time

if you could please link your ride here after that would be very helpful. In case you do decide to navigate manually after the ADZ descent, lmk. Thanks!
P.S.
I did something similar a few months ago and manually navigated to Titan’s Grove to fully ride All The Roads, but hadn’t paid attention to the navigation fallback at the time.

The official answer from Zwift is that “once you complete a single-lap only route you get the “surprise me” feature”.
So… does anyone have turn-by-turn directions for the Uber Pretzel?

Q: What happens when you keep going after the Alpe?
A: Your legs hurt. 😅
On a more serious note, re. Turn-by-turn directions, I rode my first Uber today, and Eric’s description in the Course profile above are spot-on. Good luck doubling!

Thanks! and GZ on your first Uber Pretzel!
I actually sat down and wrote out the turns one by one, because I’d hate to miss on the route segment because I miss a turn (there are around 40 of them on this route!). Anyway, I hope I have enough time to do it, as I will need to get back to the downtown banner, flip a U then ride it again and I have a ~10-hour time limit. 🤞
BTW – riding this for a good cause (Davis Phinney Foundation – yes, Taylor’s dad) http://bit.ly/2020tos

will you be making a strava verified segment from the pens on the pier. I have a ride if you need it. I tried making my own segment but strava wont get past the checking for duplicates screen. I always get the next button so I cant name the segment and continue the process. please youre my only hop.

If you plan to end the route and then start a new ride each time then it’s pretty straight forward.
If you plan to navigate back to the Downtown Banner and ride it again it’s a bigger challenge for two reasons:

This thing hurt, can’t imagine doing it 3 times. That said, I was doing about 180W whenever it mattered for around a 2.7W/Kg average, and it was just under 5.5 hours. Probably another 20-30mins to get back to the start for another lap?

I did the Uber this morning in a group ride. It did not trigger your segment. I thought it might be better if you segment was triggered via either entry point. Just a thought. I did get credit for the route via getting the route badge.

This is common to many events/races/group rides that start downtown. Similar issue with many New York segments. The solo ride/Zwift route (and insider Stave segment) typically start at a banner/arch or slightly before with a minor lead-in. Events start in the pens, which in downtown Watopia and NYC is slightly beyond the arch. Therefore your first “lap” won’t cover the Strava segment. I did notice, though, that Zwift has recently loosened up the route badge and will award if doing an event, even though it doesn’t exactly match the route/segment. I’d previously done several long races or fondos and not… Read more »

Save & Accept
13
0
Would love your thoughts, please comment.x
()
x
| Reply
Comment Author Info
You are going to send email to
Move Comment