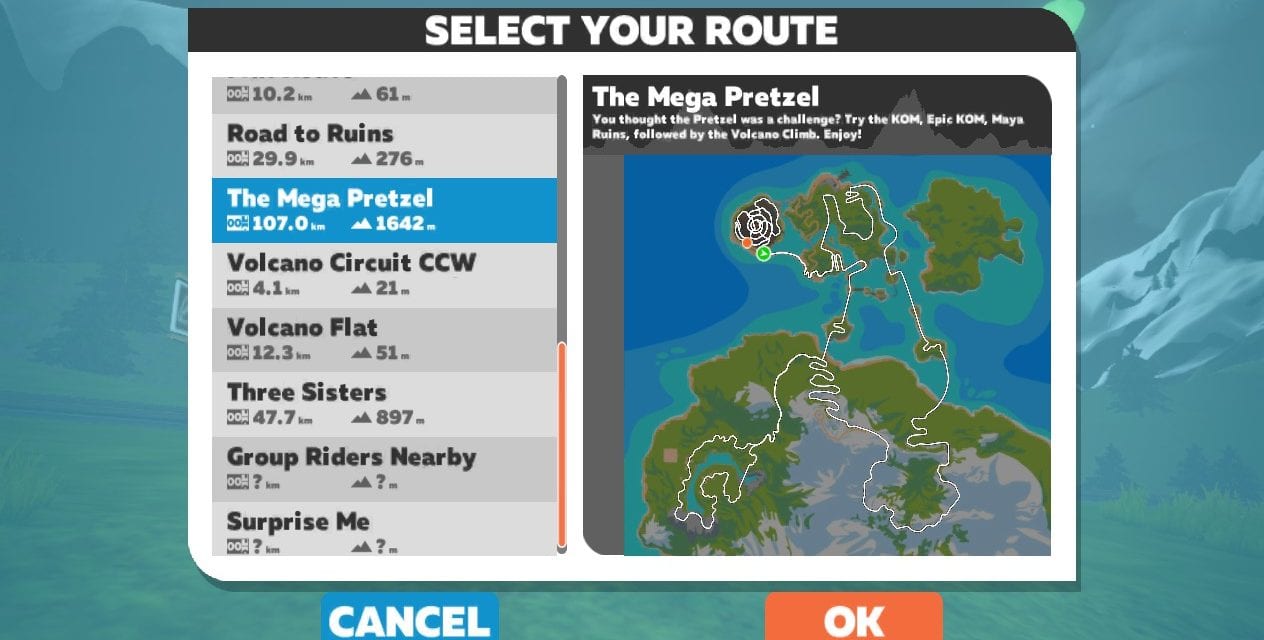 Watopia’s “Mega Pretzel” was released with Zwift’s February 1, 2018 update as the longest available route for Zwift’s iconic course. At the time of its release it covered every segment of the course except the radio tower climb, and in fact covered nearly all segments in both directions. The Alpe du Zwift climb is notably absent from this route since the Alpe was released after the route was created.

The Mega Pretzel begins and ends on the land bridge connecting the volcano to the Italian village. The segments covered, in order, are:

Have you tested which bikes would be fastest on this route using your normal protocol?

I’d also like to know, since I’ll be riding the Mega Pretzel as part of the Le Col New Year’s Day Century Celebration.

We haven’t tested various bikes on this particular route, no. We DO know which bikes/frames are fastest on flat/hilly routes, and which are fastest on long climbs. With that data, it’s up to you to make the decision based on your plan for the ride and your strengths as a rider. Me, here’s how I usually advise people: set up your bike to help you where you’re weakest, so you can hopefully hold a faster wheel in that difficult section and therefore gain vital time with a faster group. Example: are you a lightweight rider who struggles to stay with… Read more »

For Mega Pretzel event riders: you have to ride to 111 KM (to the start point shown on the map above) to get the XP bonus. I had assumed the end would be at the start/finish banner downtown, but apparently not.

Save & Accept
4
0
Would love your thoughts, please comment.x
()
x
| Reply
Comment Author Info
You are going to send email to