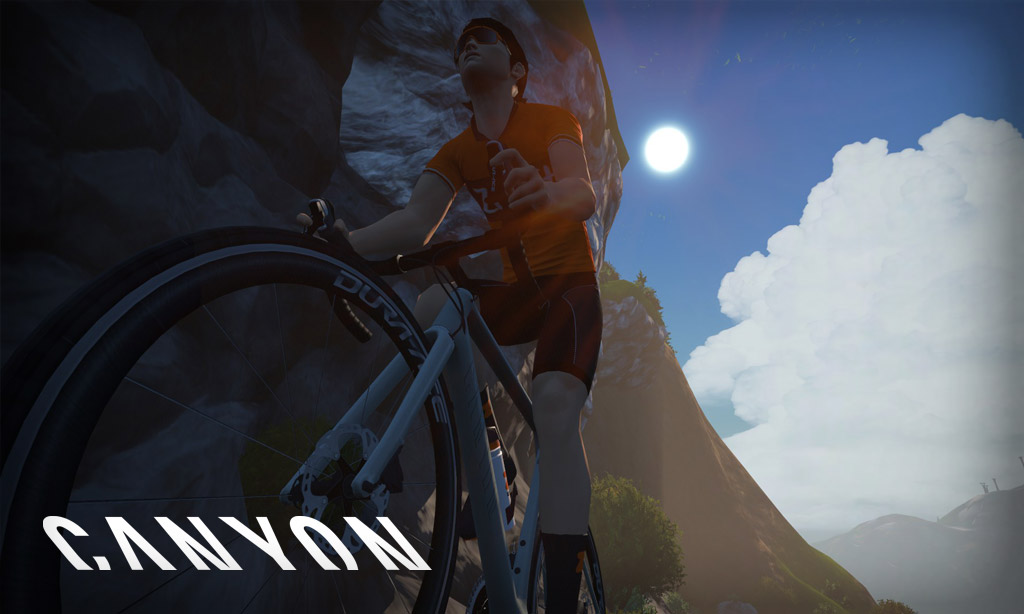 Canyon already has its “Ultimate” frame in game, which is probably based on the Ultimate CF SLX from a few years back. In terms of IRL comparisons, the Ultimate CFR comes in lighter than the current model of the CF SLX Disc, with a 10% improved stiffness-to-weight ratio. But it seems as though the latest Ultimate CFR (which is only available with disc brakes) weighs the same as the older rim-brake Ultimate CF SLX.

Here’s how the new Ultimate CFR is described in the Zwift Drop Shop:

“The Ultimate is the pinnacle of Canyon’s lightweight road bike engineering. Classic road racing performance in their lightest line-up ever. The Ultimate CFR is the epitome of modern cycling design and engineering. Complete with wireless electronic shifting, built-in power meter system and lightweight, aerodynamic frame, this bike is a thoroughbred racing machine.”

The frame is rated 2 stars for aero and 4 for weight on Zwift, so even before testing it we knew it should be a strong climber that isn’t particularly aero. You’ll have to be level 19+ to purchase it in game, at a price of 639,000 Drops.

Based on IRL specs, the new Ultimate CFR in Zwift should clock in very similar times to the existing Ultimate. But IRL performance doesn’t always map directly to Zwift performance, so we ran this frame through our standard tests to learn how it performs in game.

Here’s everything you need to know about the new Canyon Ultimate CFR in Zwift.

The Ultimate CFR turns in a flat test time 1 second faster than the existing Canyon Ultimate frame, which is expected given the frame’s IRL comparison to the older Ultimate frame. This places it squarely midfield in terms of aero performance vs. all other Zwift frames, with a flat test percentile ranking of 48%.

With a 4-star weight rating, we expected good things from the Canyon Ultimate CFR. It is, after all, Canyon’s flagship climbing racer, described on their website as “The lightest disc climbing bikes you’ll ever ride.”

The Ultimate CFR climbs Alpe du Zwift in a time of 48:55. By comparison, the standard Zwift aero frame turns in a time of 49:31, and the Specialized Aethos completes the test is 48:49. (The older Canyon Ultimate frame is 7 seconds behind the new Ultimate, turning in a time of 49:02.)

So Canyon’s new Ultimate CFR isn’t the best climbing frame in game – but we’d put it in third place. And that’s not bad at all given its low level requirement (19+) and price (639,000 Drops)!

Thanks to this frame’s strong climbing performance we’ll be updating the following posts soon:

Additionally, whenever a new frame is added to the Drop Shop we add it to our Master Zwift Frames List and update the following:

If you have reached Level 34+ and only look on the naked performance numbers, then you don’t need this frame. But for all low-mid-level- riders it’s the new best climber and slightly beats the former king (Tarmac Pro) on flats (1s) and uphill (2s). And I think, the silver frame fits better to the grey Meilensteins :-).
So perhaps, the Ultimate CFR could deserve a noteworthy showing on the “Tron vs Top Performers Scatterplot” instead of the Tarmac Pro.
Thanks again for testing, Eric !

So true.
The release of this frame is kinda lost amidst all the killer frames that have been released lately: the fastest (Cervelo S5 2020), the lightest (Specialized Aethos), the best all-rounders (Scott Addict RC & Pinarello Dogma F).
But 6-7 weeks ago the Ultimate CFR would have been the new King of the Hill! Besting the Tarmac Pro/Canondale Evo/Bridgestone with 2-3 second uphill (and 1 sec on the flats). That would have been BIG news. Still, as you say it’s the top climber for low-mid level zwifters until reaching level 33.

Carsten Re. from Germany
Reply to  Thomas Christiansen

Many thanks Thomas and I totally agree with your thoughts. And yes, some weeks ago, this frame’s post would be a BIG headline … and now it feels more like a side note. But hey, we have lots of frames & wheels to ride and sweat for 🙂

Personally I’m level 27 and bought the Cervelo S5 2020 straight away, before it got nerfed (probably would have anyway).
So now I’m kinda low on drops and although the new Ultimate is tempting, I’m gonna save my drops for the Aethos and the Addict (and the Speedmax, the DT Swiss Disc, the ENVE7.8 and the Alpinist… LOL!)

Carsten Re. from Germany
Reply to  Thomas Christiansen

Ha ha, yeah I better hit the Alpe again. It’s been a while actually. 8 climbs and no Meilensteins yet…