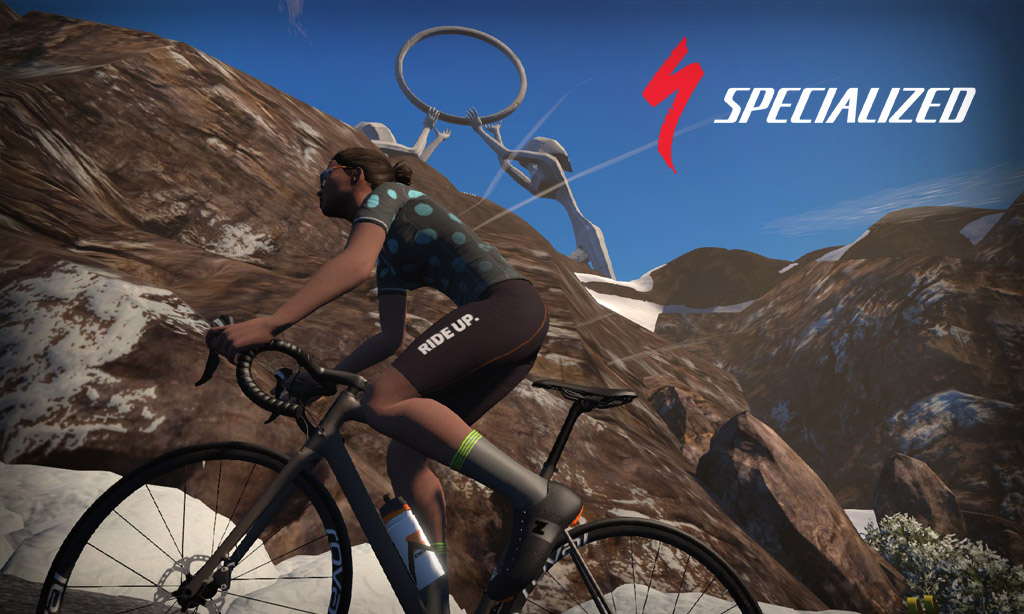 This bike created quite a stir in the roadie community when it was announced in late 2020, but not for the usual reasons. It isn’t flashy, and doesn’t look radical. Actually, it looks like… a road bike. And that’s exactly what Specialized was going for. A bike made for riding, not racing. One that rides like a dream. Based on the reviews we’ve read, they hit their target.

Here’s how the frame is described in the Zwift Drop Shop:

“The Aethos frame has been designed with the perfect combination of ultimate ride feel, light weight, and style – from accelerating up steep pitches and descending technical descents, to all-day saddle comfort on even the longest coffeerides, the Aethos hits the mark. With Aethos, Specialized stopped worrying about winning, or the way things are supposed to be done, and instead chased the greatest expression of ride quality ever made. Well, they did it, and in staying true to keeping that promise, they broke every design, ride, and race rule along the way. And they’re not sorry.”

The Aethos caters to those who prefer a classy/minimalist look: don’t expect a lot of bling for your buck! You’ll have no color options on Zwift apart from the default dark brown/green, with hardly any visible decals.

The frame is rated 2 stars for aero, 4 for weight – so clearly it’s a climbing bike on Zwift. (Specialized claims the Aethos is the lightest production disc-brake frame ever made, weighing in at just 585 grams.) You’ll have to be level 34+ to purchase it in game, at a price of 923,000 Drops.

We know the reviews say the IRL bike rides like a dream and climbs like the featherweight it is. But IRL performance doesn’t always map directly to Zwift performance, so we ran this frame through our standard tests (plus some extras just to be sure) to learn how it performs in Zwift. And the results were, frankly, surprising!

The Aethos is rated at 4 stars for weight, and with the IRL version being super-light, we figured it would climb well in Zwift.

The Aethos distances all other frames in game in our Alpe du Zwift test, reaching the top 8 seconds faster than the next-fastest frames. Wow! That’s no small margin, when you consider that prior to the Aethos’ release, the top 15 climbing frames were separated by just 8 seconds.

Some of you will surely ask if this standout performance is a bug. Will Zwift go in and tweak the Aethos to make it climb slower after you purchase it, like they did the Canyon Aeroad 2021? We don’t think so. Our interactions with ZwiftHQ indicate that this frame’s performance is right where they intend it to be.

The Aethos is a truly unique bike release from Specialized, and on Zwift, it stands alone in its climbing ability with an Alpe du Zwift time of 48:49. By comparison, the standard Zwift aero frame turns in a time of 49:31, and our former top three climbers (the Specialized Tarmac Pro, Cannondale EVO, and Bridgestone Anchor RS9s) made it to the top in ~48:58. (All of these test times were done with Zwift’s stock wheelset, the 32mm carbon).

As a result of this frame’s incredible climbing performance we’ll be updating the following posts soon:

Riders now have a chance to test the new Aethos frame and Roval Alpinist CLX wheels in the Specialized Roval Climbing Challenge events beginning July 20th. We predict that heaps of level 34+ Zwifters will be spending their Drops on this frame in the coming days. And we won’t fault you for doing so! In fact, we’ll be standing in line to buy our own…

That’s a fast climbing bike on zwift. Let’s hope they keep it like that.
Might have to spend some drops as being a fat bloke, I need as much assistance as possible. 😁😜

Daniel Connelly
Reply to  Mick Such

An unanswered question is whether bike weight is proportional to body weight, or is independent of body size, so is this a % advantage (like the feather) or proportionately more to lighter riders? Eric’s previous tests suggest it’s proportional. Anyway looking @ my VenTop times yesterday, I thought I saw an approximate 1% advantage from the Aethos/Roval combination versus my prior Tarmac or Evo/Enve. 8 seconds here is 0.27%.

Guess I’m off to the Drop Shop! It better be good at almost 1mil drops

Don’t assume, the safety bike had a brief stint as the best climbing bike by a good margin….

Like I said above, ZHQ has made it pretty clear to me that the Aethos’ performance is exactly what was intended. I don’t think it’ll be changed.

We’ve all heard that before…lol

So basically Specialized paid Zwift to make this bike fastest?

Specialized Bicycle Components was one of investors in the last $450 million capital investment in Zwift. So yeah, Specialized has a financial stake in Zwift that’s probably larger than any other bicycle company.

Right, so that’s why its so confusing to me that the Tarmac SL7 is so average on Zwift….

Hi Eric, has it been renamed in the latest update? Can’t find it in the dropshop (level 50++) only the Amira S-Works which has 4 stars for weight? Thanks!