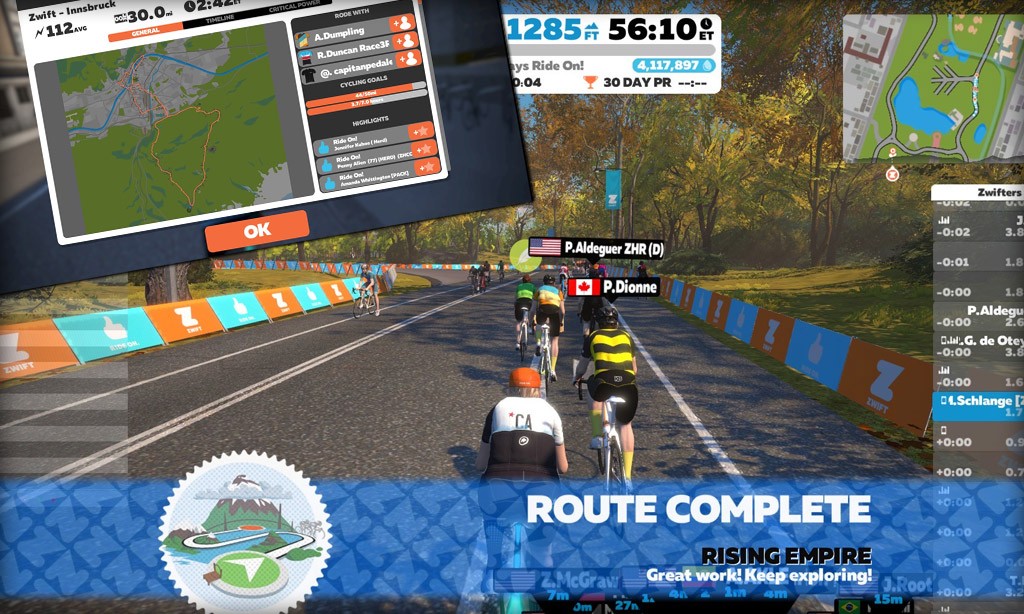 Editor’s note: Monica has undertaken the “Couch to Route Hero” challenge of riding all 67 “free-ridable” Zwift routes (and getting all the badges) in 11 weeks. Each week she shares her story of the previous week’s struggles and accomplishments. Follow along on her journey, take the challenge yourself, and be sure to give her a Ride On if you see her on course!

This week was a bit of a let down mentally. I don’t know if it’s the Shelter-in-Place orders getting to me (we’re on day 20-something), or the fact that the challenge was already supposed to be done but isn’t. Either way, it was a blah sort of week, to be sure.

The Week Lined Up

How the Week Played Out

After the high of finishing London’s PRL Full last week I really had no interest in riding my bike ever again. This is how it’s been every time I do some amazing feat on my bike. “Okay, I’ve done a lot. Now I’m done!” I couldn’t stand the thought of not having anything to write to you all though so I forced myself to ride one route on Tuesday and two routes on Saturday.

It felt great to ride this at my full capacity. I pushed myself up the climbs and sailed through the flats. And it’s funny, because now that I’ve done much bigger things it wasn’t so daunting to go up both sides of the KOM in New York.

For the first time in this challenge, I had to do the world hack to get a route done. This was pretty much inevitable, even though I had carefully planned out each day before the real world stopped. There just aren’t a lot of days where Innsbruck is available, even now with the choice of 2 guest worlds.

The downside to a world hack is not having a lot of company out there. At the beginning of my ride there were only 34 of us in Innsbruck. I’ve realized more and more that these routes go by so much faster when others are riding… even if they’re not riding specifically with me! So, if you can do an Innsbruck route while it’s on the calendar, do it. It may be far more interesting!

I didn’t want too many rides looming over my head on my last week so decided to do a second ride after Achterbahn and some lunch. Someone told me later that it was amazing I did two rides in one day. It didn’t seem like some amazing thing at first but then I thought about this journey I’ve been on. Monica on week 3 would have been hard pressed to do a 4 bidon and a 2 bidon on the same day. But Monica on week 11+1 isn’t the same gal! A 4 and a 2 ain’t no thang! And gosh, am I proud of that!

I have three routes left! Watopia’s Out & Back Again, Innsbruck’s Lutscher CCW, and Watopia’s Road to Ruins. Let’s be real: your girl here, the one who did the Uber Pretzel is NOT looking forward to Lutscher CCW and doing that KOM Reverse climb twice. Haha. Silliness. I’ve done much more difficult things!

I invite you all to join me after this whole Route Badge Quest is done to get another badge: the “On Fire.” Check out the April 25th event info here!

What routes did you do this week? And if you’ve ridden Lutscher CCW do you have any tips?

Lutscher is not really any different CCW. I slightly preferred the steeper way round because it means the ride is more energy efficient as more of your effort is going into climbing rather than pushing air out of the way.
Well done for getting back on it after PRL. All too easy to slip into the psychology of finishing after the big one.

Congrats Monica.
I’ve got only 5 routes to go.
The 5 hardest. 😀
This week I rode only outside.

You got this, Monica! Thanks for the Ride On today

Well done Monika! After the amazing PRL full with you and all those other crazy guys and girls, I really had a rough time riding alone.
Besides very long working days it also was beautiful weather outside, so I did a bit of running and riding outside. But really it was the thought of riding “alone” that really didn’t help get me on the bike. Even riding outside alone isn’t really fun.
so I have to grab myself by the …. and get myself on the bike again!

Thank you! With the tables from you and with patience I managed in 3 months to finish all the badges routes!

I bumped into you on one of your rides this week Monica. Keep up the good work. Nearly done. You’re inspiring a lot of people to do this quest too. Any physical exercise distraction is a great thing these days.

Well done for getting back on the bike. i know exactly what you mean i have done this my whole time spent in cycling, Running, and Triathlon. complete a major effort and then let it slip and have to start again. my plan was to do the route challenge in the 55 days. so far i am on day 21. and starting to struggle, sore legs. and the annoyance that 2 of my bigger rides have not been registered. 3 sisters (didn’t upload) and on Friday i did the Big loop and i stupidly hit the U turn, turned back… Read more »

If you completed a ride on Zwift that didn’t upload to Strava, you van log into the Zwift website, download the fit file, and upload it in the Strava website.
If it didn’t register on zwift, I’ll leave someone else to chime in, though I have heard of people opening tickets for that.

I did the Lutscher CCW in a race event so I didn’t have to world hack. I didn’t race it but everyone rode steady the first KOM climb as the race started from the KOM banner which meant lots of company. One of the clubs uses Lutscher and Lutscher CCW regularly as event routes. Good luck, you’re doing great.

16 of the hardest routes left to do, leaving PRL full until the end as I already have 100 mile badge and want to know it is over for now after that ride. Just keep your head down and and settle into your own pace with the Lutscher CCW, same as any climbs really. Stay safe

This is awesome Monica, well done!
By the way, you gave me a goal to accomplish during this global pandemic & lockdown. All my goals for this year ended up in the trash bin, but this is a new challenge and I’m excited to start tonight!
Let’s see if we can complete them all in 10 weeks

This journey inspired me to do nearly the same, and though I missed the PRL Full “party” (not a party haha) I did knock it out and you’re right. After doing that sucker, what’s a 2 route day? As long as it doesn’t have the letters ‘PRL’ in it, nothing. The extra work capacity you’ve built is awesome, you should revel in it!