How the Race Was Lost: Queen’s Highway Surprise 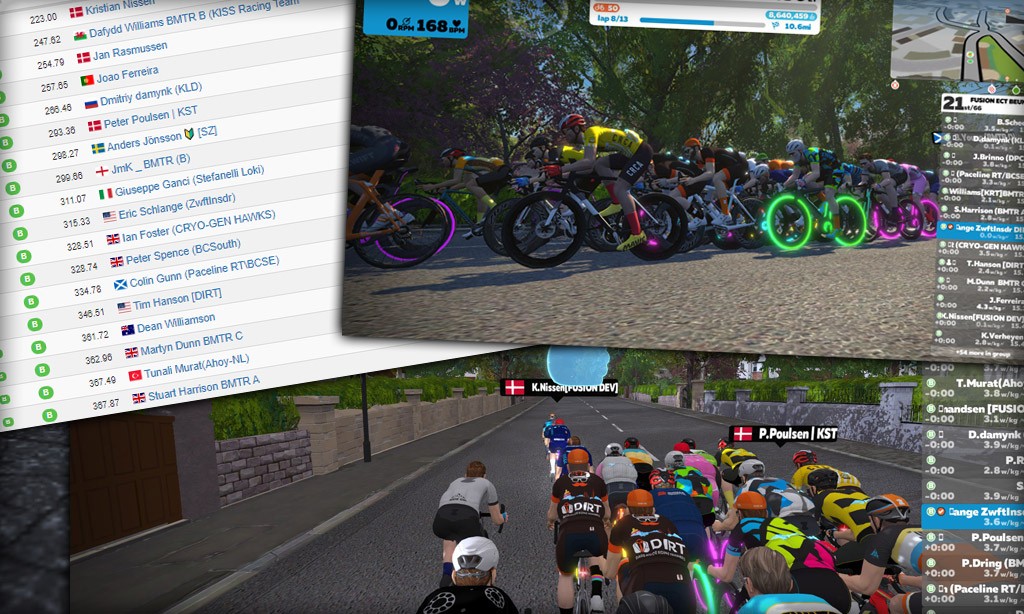 If you’ve been following this “How the Race Was Lost” series, you know that I, like many Zwifters, race for different reasons on different days. Usually I race to win: I find the event best suited for me, and I ride to give myself the best chance at 1st place. Other times I might join a race in order to get a specific type of workout – putting in repeated short attacks, for example. Sometimes I’ll do a hard, long race, knowing I stand zero chance at winning, but also knowing that the only way I’ll go hard for three hours is in a race!

I might also race with teammates – riding a TTT, or putting in work for a rider who stands the best chance at winning. And occasionally, I find myself in self flagellation mode, looking to find a race that hits me right in the weak spots so I can be pushed to the limit in my area(s) of weakness and hopefully get stronger.

That was my plan for today’s race: 13 laps around Yorkshire’s Queen’s Highway in a race of Team Fusion’s “BEUNSTOPPABLE” series. No race in Yorkshire had ever been kind to me, and I anticipated more of the same today.

This was a mid-morning race, so I ate my favorite breakfast (oatmeal with pecans and blueberries) a few hours beforehand. As race time approached I chewed two pieces of caffeine gum and rubbed PR lotion on the legs, then headed over to Yorkshire to ride my warmup while doing a bit of recon.

I’m quite familiar with Watopia‘s roads, as well as Richmond, Crit City, and most of London. These maps I can navigate in my mind, pointing out every rise and turn. I’m definitely less familiar with portions of Innsbruck (the climb loop), the upper roads of NYC, parts of Bologna, and the upper loop of Yorkshire. While I’ve ridden in Yorkshire a fair amount, it’s always been for events – I don’t really go there when free-riding. Those events typically only hit the smaller, upper loop of the course once or twice, so while I was familiar with the general layout of the Queen’s Highway route, I wanted to know all the nooks and crannies. Time for some recon work.

There were other racers on course, and we had a nice chat. Here’s what I found in my pre-race recce:

After half an hour and five laps of Queen’s Highway, I was ready to race the loop. Let’s do this!

This route’s lead-in is around 1.8 miles long, taking you over the challenging bits of the Queen’s Highway loop before you hit the sprint/lap banner for the first time and your laps begin to count down. I averaged a reasonable 317 watts from the start line to the lap banner, making the front selection which broke our starting pack of 66 neatly in half.

I had my eye on only two riders in the pack: Kristian Nissen (Fusion Development), who was ranked at the top of our B field, and my friend Dafyyd Williams (KRT) who was ranked #2 and I knew to be a very strong rider.

Dafyyd attacked across the lap banner a few laps in, but I just sat in the pack who easily reeled him in on the descent. “Boring,” Dafyyd messaged to all riders. Perhaps. But I didn’t think I would be able to hang with the front for the full 13-lap event, so I wasn’t going to waste my legs trying to join him!

Our group found a good rhythm after a few laps. PowerUps were disabled, which made the group even more sedate. The only way the group could have really been broken up would have been by a strong attack by multiple riders on back 2/3 of the loop – but nobody seemed willing to do that.

For my part, I was just happy to be able to hang with the group on the uphill portions of the route! Here’s how I rode the loop – keep in mind I’m a bit heavier than most (~81kg) so, compared to a lighter rider, the descents are friendlier to me, and the climbs a bit more punishing:

I kept waiting for one of the well-represented teams (BMTR or Fusion) or one of the stronger riders to put in a hard attack. But it never came! On the 9th lap of 13 it finally sunk in – I could make it to the end of this race! No one was more surprised by this than myself.

No strong attacks came in the penultimate lap, although Nissen moved up near the front of our pack. He was obviously a smart racer – but what was his strength? I hadn’t done enough digging to know if he was a sprinter who would win in the last 15 seconds, or perhaps better suited to the long attack with strong 1-5 minute power. I kept a wary eye on him, deciding I would try to follow his wheel if he attacked any time after the descent on the final lap. (If he attacked any sooner I figured the group would pull him back before the race was done.)

We began the final climb, still a group of ~30 riders. I was well-positioned within a few wheels of the front, but little did I know how unprepared I was! Nissen jumped… hard. His numbers went orange, he gapped our group, and even though I pummeled the pedals with everything I had, I couldn’t get back onto his wheel.

I averaged 436 watts for the final 90 seconds of the race, chasing Nissen up that cursed climb. My legs were so gassed that my final “kick” to the line was more of a heel-click. I finished 7th according to Zwift, but 4th on ZwiftPower. Not a win, but I was very happy to have hung in until the end. Nissen took first with his strong, long attack. Well done, sir.

One strategic exercise I enjoy is figuring out a sort of “attack profile” for each portion of a race course. In each section, a racer can ask: are attacks likely to happen here? Will those attacks stick? And the all-important question – is this a smart place for me to attack?

I rode this race 100% defensively, never looking to attack, because I was quite sure I wouldn’t be able to hang with the front to the end. If I was to race this again, especially if I was working with teammates, I would probably attack on the middle third of the circuit, on the rollers. Because it’s here that a well-timed kick can give you the momentum needed to quickly gap the group. Even if you don’t stay away, they’ll probably burn a few matches bridging the gap up the climb.

Overall, I was pleasantly surprised with my experience on the Queen’s Highway. Losing a bit of weight and getting a bit stronger allowed me to stay in contention, and the constantly changing pitch made for a an exciting race. I would race here again!

Its great reading these posts about peoples racing experiences, Im a CAT C rider working my way up slowly but surely to podium level but every race Ive done (~20) I never have time to think any strategy or actually pay attention to whos doing what when as I always seem to be running at max effort just to keep up with the front pack and try and keep my HR down to not blow up ﻿😳﻿ Hopefully the more I race the more “time” ill have to get a strategy! good work!

Yeah, it takes time/practice. You’ll begin to make smart decisions automatically. I’ve always found it useful to debrief myself after each race, though, to think through what happened and what I could have done differently. Writing these posts helps me do that, in fact!

Takeaway: you and I have similar taste in breakfast. Oatmeal w pecans and blueberries (I add a banana too) FTW!

Butter and brown sugar as well, of course. Then leave a little room for the oats… ﻿😀﻿

Always more brown sugar (or maple syrup), haven’t tried butter though coconut oil can be good. I do add chia seeds to make it “healthy” too.

What’s your suggestion for a B rider with 3.25 wkg? Given the threshold is 3.2 I get dropped in most races before 20 minutes. I used to do well in C races but ZwiftPower kicks me out of final results plus I don’t love sandbagging! I guess it’s just a bit discouraging being dropped every race!! Any advice to go over the hump??

How much do you weigh? A 3.25wkg, 60kg rider needs to approach the race differently than a 3.25wkg, 90kg rider. I was in your shoes a few years ago. My first Zwift season I worked from 3.0 up to 3.2wkg, then got upgraded without ever winning a C race. My initial goal was to finish in the top 50% of the B’s. Then it became top 1/3, etc. It really depends on your power profile and other factors. But if you’re getting dropped in the first 20 minutes, I would advise working on intervals in the 30s to 5 minute… Read more »

Thanks Eric, that’s what I’m focusing on, like you said my goal is to hang around as long as I can!

I agree with Eric. Putting out Cat B watts and putting out Cat B W/kg can be very different things. I’m light, so while I’m technically a Cat A in terms of W/kg but I don’t meet the 250W criteria to be Cat A on ZwiftPower. Depending on the route profile I still struggle to keep up with racers doing much lower W/kg than me. Things that I’ve found help: Dig deep for 5 minutes at least. If you get dropped the race is over so you might as well give it your all. Move to the front before the… Read more »

I’ve been racing against Kristian Nissen every week in the DCU Uno-X Cup. He’s incredible to race against and watch. Super strong dude.

Hi Eric. Great report thank you! What bike did you used? Or recommend for this particular route?
Thanks

Thanks Eric for the great recon! I am wondering the same, which bike. I can’t tell from your picture.

I went with my typical aero setup. While this route is quite pitchy, the climbs aren’t steep or long enough for a lightweight setup to give you an advantage over an aero one.