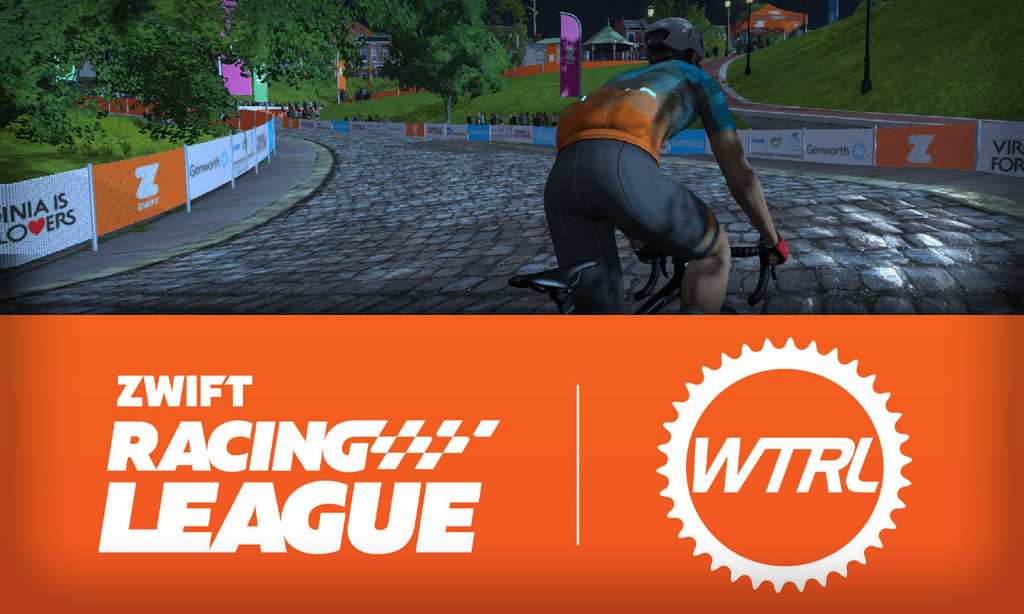 The third points race of Zwift Racing League Season 3 happens Tuesday, May 4th. And we’ll need the 4th to be with us as we’re heading to Richmond to have repeated goes at what may be the punchiest racecourse in ZRL history.

It’s multiple laps of Cobbled Climbs, a route featuring Richmond’s 3 climbs on every lap. Let’s dig into the course, including some tips for bike choice and strategic options.

Looking at the Route: Cobbled Climbs

We begin at the standard Richmond start/finish banner, but make a quick left turn, and another left, onto the descent of E Main St. (This is the longest descent on the route, so enjoy it while it lasts.)

After some flats and rollers along the river the road tilts up and you know what’s coming: our first KOM of the day. Twisty, bumpy Libby Hill!

Hammer your way up this climb, then recover for a few seconds as you descend to the start of our next KOM: the short, straight 23rd Street. This is essentially a “sprint-climb”, which is why Peter Sagan was able to drop everyone in his famous attack here in the 2015 UCI Worlds race.

Do everything you can to maintain good pack position up and over the 23rd Street KOM, knowing you’ve got a few seconds of recovery just up the road on the Broad Street descent. You can even supertuck the descent like Sagan did (but can’t anymore – thanks for ruining the fun, UCI!)

You’ll need every bit of recovery you can get, because just a few seconds after the descent we begin the final climb of the lap: Governor Street! This is not a timed KOM section, but it’s where the race-winning final moves are often made, and it feels so long in the final minutes of a race. Finish this climb then it’s a false flat straightaway to the finish!

Each lap is 9.2 km (5.7 miles), and A/B teams will race over 5 laps, while C/D will race 3. This is going to feel significantly longer than most ZRL points races... because it is!

Sherpa Dave has put together a race recon video and some helpful notes:

Sagan went for his break on the last lap coming over the 23rd Street KOM, but that’s a big ask for normal humans! More likely the field will be whittled down lap after lap and a small bunch will compete for the finish line (FIN) points. But keep in mind, there are more points available than just FIN – and I’ve spoken to plenty of teams and riders who are rethinking what success means when Fastest Through Segment points are available.

This is a puncheurs paradise! Pure sprinters might stay with the first lap or two and get some FAL (First Across the Line) points on the KOMs – maybe even FTS points (Fastest Through Segment). But can they stay the distance? Then again there are no sustained climbs for the Grimpeurs (climbers) to show off on. Yup, this is for the riders with enough muscle to punch their way up, but not so much that it’ll weigh them down… assuredly a puncheurs paradise!

Key parts of the recon video:

If all you want are the facts… here is the one-page print-off sheet with the key distances.

This isn’t epic in the way NYC was – but you will leave this ride more depleted than you thought possible… particularly the B’s!

Here’s the course preview from Rick at No Breakaways:

Riders will be awarded powerups through the start/finish banner as well as the sprint banner, meaning we’ll get 3 powerup chances per lap. Three powerups will be given out at each banner:

Aero Boost (helmet): makes you more aerodynamic (reduces your CdA by 25%) for 15 seconds. Use this if you’re contesting the sprint intermediate, attempting an attack at high speed, or just trying to catch a breather in the peloton on flat or descending road.

Lightweight (feather): reduces your weight by 10% for 15 seconds. Use this when the road tilts upward. Useful for taking the edge off of a ground-level road’s lumpy climbs, or to help you grab extra points on that final KOM.

Draft Boost (van): increases the draft effect you are experiencing by 50% for 30 seconds.
Use at higher speeds (flats and descents) when you are already drafting off another rider (since this powerup only helps when you are drafting.)

None of the climbs here are long or steep enough for a true climbing bike to be the sensible choice. And yet, going full-on aero with a disc wheel setup probably isn’t your best option, either.

The Tron bike is the best of both worlds, climbing a bit faster than the disc wheel but also performing very well on flats and descents. If you don’t have the Tron bike, go with an all-arounder frame like the Canyon Aeroad 2021 coupled with lighter-weight aero hoops like the ENVE 7.8, Zipp 858, or DT Swiss ARC 62.

This is a points race, so everything comes down to the two timed KOMs, as well as the finish. All the miles in between are just the setup.

Here are a few predictions about what we’ll see in this race:

Is there a place here for non front-group riders to earn some intermediate points? You’d like to think so, but we don’t see it happening. As we’ve already said, FTS points will go to the top puncheurs on the first lap. And once that front group is away, all the FAL and FTS and big finish points ride away with them. The stragglers will be left to battle over paltry finish points.

Any insights or further thoughts on the big race? Share below!

I have no idea why I read these, I get dropped on the sprint start.

My team has just signed up for their C category race and it is saying 5 laps, not 3. Hopefully that’s a typo…

I collected 95 points on NYC in the B league race. Cobbled Climbs may be even better suited to me (75kg, 270w, but 9.8 for 30s). The first climb will be brutal, sprint-climb will finish me off but I’ll be smashing those climbs each lap if I have the energy. It’s possible for one rider to score 256 points! It’s always difficult to call when to put the hammer down to optimise FAL and FTS points each lap. You want to draft a little going into the climb as long as you don’t let those who go early get out… Read more »