How the Race Was Lost: ZRL Week 4 TTT on the Magnificent 8 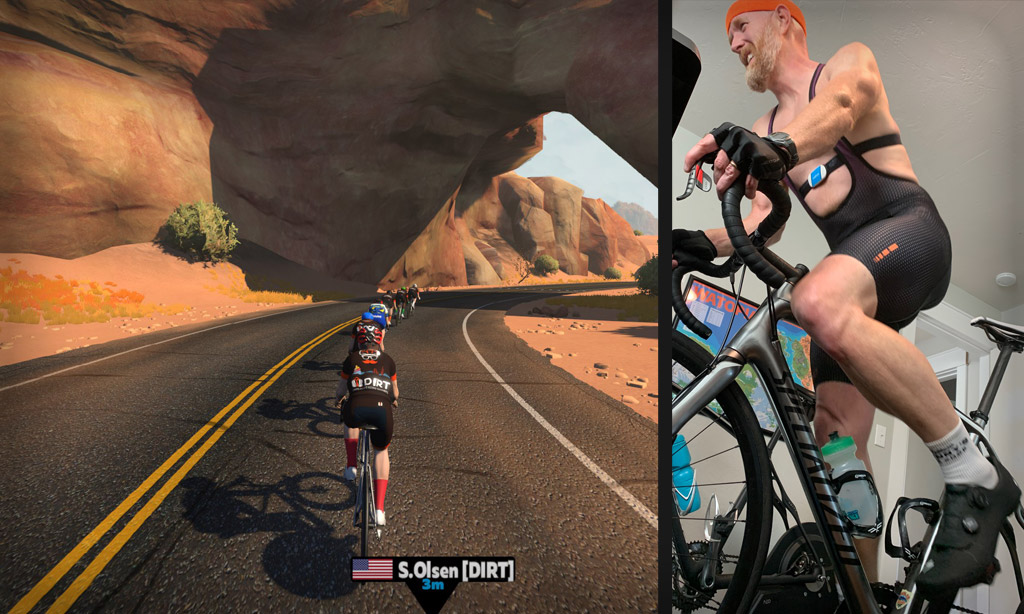 This was the fourth week of Zwift’s groundbreaking Zwift Racing League, and the second team time trial of the series. Since this was our first TTT after being seeded into our division (Men’s EMEA East 2 Division 1B), we weren’t sure how we’d stack up against the competition. But we knew we were up against some very strong teams, and it would take every bit of power, technique, and strategy to come up with a good result on Watopia’s Magnificent 8.

My race prep followed the usual pattern – chewing some caffeine gum and applying PR lotion to the legs. Drank some beet juice as well, because I’m a glutton for punishment (that stuff tastes terrible). Then it was time to suit up and warm up.

My team (DIRTy Beasts Hellhounds) has members based in the USA, UK, South Africa, UAE, and Australia, so we’ve struggled to get together and practice apart from our pre-race warmups. On top of that, none of us have raced together prior to ZRL! But we’ve gotten along swimmingly and come to agreement on each week’s strategies via Discord text chat throughout the week.

Snowy Pruett, our team manager, had organized a Meetup on Tempus Fugit which began 35 minutes before we had to be in the start pens. Our plan was to chat on Zoom during this Meetup, to practice our rotations, and talk strategy. This worked out well, although our rotations were anything but smooth during these practice rounds. More practice is clearly needed, but we had no more time – to the pens!

We’d decided to try the start “launch” technique explained in a recent No Breakaways TTT Master Class video. Basically, you stay on the pairing screen (which prevents you from moving), rev up the watts as the final seconds count down, then hit Escape to close the pairing screen when the countdown hits “1”. This lets you jump up to full speed very quickly, as opposed to starting your pedaling when the clock hits zero.

It worked well, and we jumped off the Watopia pier and into formation quickly. I was to be behind Paul Robertson, and each of us had agreed to don a unique piece of headware so our avatars would be distinctive. Paul was in the a blue hat, then other team members had black, green, white, orange, and me with red.

Justin Wild took the first pull, then Paul, then I was up. I was feeling good so early in the race, so I let everyone know I’d take a 1-minute pull. My speed at the front, though, seemed stuck at 45kph, and we were shooting for 46-47 on the flats. I pushed harder, trying to hold 425W+ for the duration.

We quickly made our way through the Volcano and over the land bridge, then we encountered our first challenge: the twisty dirt climb to the Italian Villas. First the dirt slows you down, then the incline slows you even more! By the time I reached the top I was wondering if I’d overcooked it already. But I pushed to stay on Paul’s wheel and breathed deep, trying to recover a bit before the big climb.

Our plan on the climb was to push hard on the steep initial section, regroup on the flat, then ride as a blog to the top, letting stronger climbers pull at the front. Our strong climber Scott led us outup the climb as we caught and passed our first rider, then it was a hard effort up around the statues and back into blob formation. We kept pushing, then I went hard on the final straightaway, trying to pull keep our speed up, knowing recovery waited just around the bend:

We supertucked down the descent, made the neck-breaking turn onto Ocean Boulevard, then got back into formation. Fuego Flats was just up the road.

I made my worst rotation mistake of the race on the false flat leading into the desert. As I eased off to sink to the back of the group, Justin and Paul got stuck on my wheel, and no matter how much I eased they didn’t come around! A 20-30m gap opened ahead of me, forcing Justin and Paul to put in a harder dig once they got around my wheel.

This is definitely an area where I need more practice – timing my power so I quickly slide back after taking my pull, without taking any teammates with me or dropping off the back to far.

My poor technique aside, we arrived in Fuego Flats intact, with all 6 riders chugging along. We had already discussed the fact that the flat final section of this route would require efficient rotations and high wattage in front in order to maintain top speed, so we all settled in to make that happen. The desert kilometers went by quickly, and soon enough we were in the Ocean Boulevard tube, ready for the final push.

Here’s what a rotation through the desert looked like in the Zwift Insider Pain Lab:

Our beautiful single-file formation had devolved into a blob starting on the Col du Saddle Springs ramp, and our speed seemed sluggish now as we made our way through the underwater tunnels. I voiced some encouragement over Zoom: “Just a few more minutes guys! We’ve got to push harder!” Justin Wild, the voice of experience on our team, said “If you’ve got power, move to the front.” Oh yeah – that makes sense!

I put in a dig as we neared the ramp out of the tunnel, and Scott let us know he’d be pushing hard up the ramp then dropping off, since we only needed 4 riders across the line. With just 1km to go, it was time to go all in. I gritted my teeth and pushed with all I had. “Push push push” Justin was saying from his pain cave in early-morning Australia as my wife cheered and teammate Alex from the UAE crossed the line first. I came in just behind him, totally spent!

This was my first time including Zoom audio in the recording, but I realized afterward that my own voice didn’t get recorded. Still, you may find our chatter interesting…

I set a few power PBs in the 36-38 minute range during this effort, so I’m happy with that. 5th place in our division (which, along with the EMEA East 1 Division 1B, is the toughest division in our timezone) is a solid result for the Hellhounds, moving us into 10th place out of 22 teams. And while it was nice to have a little extra to pull the team along in some of the final meters, I was toast by the time we hit the line – so I think I paced myself well.

Justin Wild is our strongest TT rider, and he’d been forced to drop out early in our first TTT event. It was very good to have him along for this effort – his watts helped enormously. It’s amazing what a difference a strong (or weak!) team member can make in a TTT.

As a team, we agree there’s still plenty of room for improvement in our TTT efforts. Keeping our rotation tighter is a big thing, and knowing just how hard to pull is another. We’re shooting for particular speed targets on flat sections, and will continue to hone our “sink and sprint” rotation method.

How did your TTT race go? Got any tips for me? Share below!

Nice work, once again our numbers are very similar, our DDC Oost Trein team finished in 5th in US East B1 as well, with a time a bit slower. A handful of seconds would have put us on the podium. We won the TTT 2 weeks ago, but one of our strong riders got upgraded to A and we took the high ground and didn’t use him this time despite being within the letter of the rules. Still tied for 3rd in the division for the season though…

We were only ~7 seconds from 2nd place. It’s a close race!

Curious about “got upgraded to A”, was that because they exceeded the B category 4wkg limit for that race?

Brutal race for me, set a new power PB from 1:44 to 44 minutes, which shows how hard we pushed as I have been racing for months and raced week 1 and 2 of ZRL. We caught 2 teams coming out of the sea tunnels and had to sprint for the last 4 minutes! Big improvement over our first ZRL TTT.

Are you back to using the venge? And were you using the disc wheel?

For this race I used the Venge+disc, yes, since that’s the fastest available setup on flat routes. I’m not stuck on using the Venge for all races… although I did use it today for a Crit City blast!

Unrelated question but what would you recommend for a rider on lvl 37 who has tron, 858s and venge s works disc?

Wheelset and and bike combo.

LOL. I mean, what route, what type of event, what type of rider? Are you doing a TT up the Alpe? A flat road race? Jungle Circuit loops?

Lol, sry. What would be fastest wheels and frame combo for crit city and tick tock?

Venge S-Works with 808 Disc is just barely faster than Tron on those courses. But the Tron climbs slightly better, which may be a microscopic help on the little Crit City kickers.

Excellent write up and video Eric. That was tough!

Thank you, sir. And the loud breathing in the last video isn’t me – that’s a teammate on Zoom! (In case anyone was wondering. Because I’m an incredibly gifted rider who wasn’t working hard at all…)

Just wondering if there is some randomness to sink getting stuck during sink and sprint such as the position of the rider approaching from behind ? Or is it purely power difference between sinking vs. approaching rider i.e. user error ? 🤔

It’s not just power… it’s speed differences to. I don’t think it’s random at all, but it takes practice to do it right… and the onus is really on the sinking rider to keep sinking until he’s at the back.

Good result but starting from the pairing screen is basically cheating

I (and many others) disagree. If you think it’s cheating I’d recommend convincing WTRL to change the rules, since you’re losing time by not doing it.

it Looks like your bike Eric is in a rocker plate. Do you feel a difference in power output or do you think you body stays more relaxed? Let us know advantage and disadvantage. Worth maybe a story after market launch 100 days riding on a rocker plate. This is what I learned.

For me, it comes down to having (mostly) natural out of the saddle movement, and the comfort of a bit of motion. I honestly don’t know how people can stand riding on a rigid setup.

Do I feel a difference in power output? Yes. But I’m used to riding with a rocker, so if I ride a rigid setup it feels really awkward and unnatural, and my power numbers drop.

I’ve written a few posts about rocker plates on this site: https://zwiftinsider.com/?s=rocker+plate