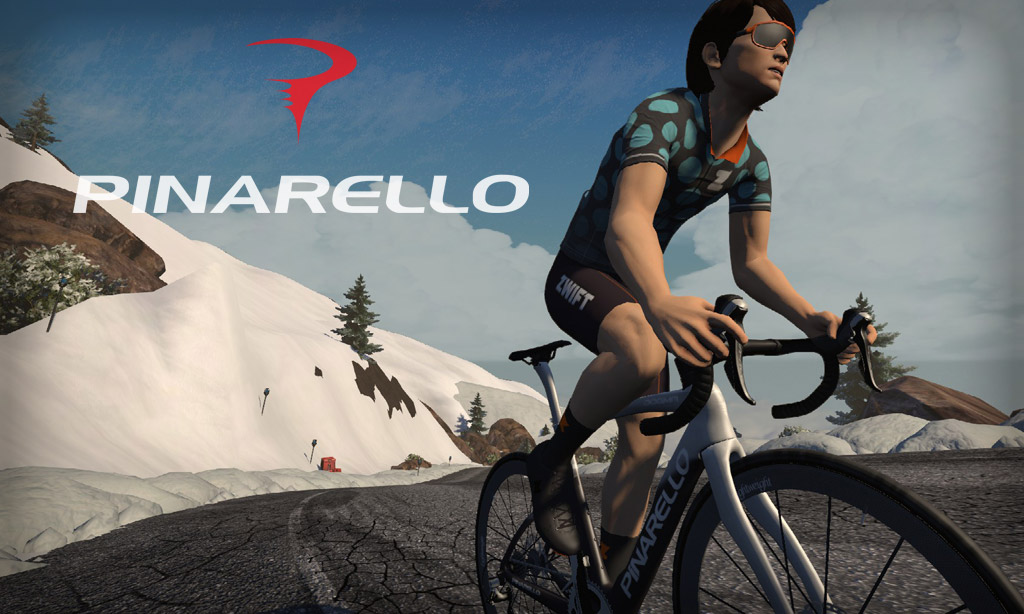 Zwift’s newest update includes a new bike frame: the Dogma F from Pinarello. Pinarello has a long history with Zwift: the Dogma F is actually the fifth Dogma to make it into the game, and the Tour Italy Challenge earns you a Pinarello F8.

Each iteration of the Dogma has performed a bit better on Zwift than its predecessor, with the F12 (added in March 2020) nearly making it onto our fastest frames list while also placing 6th in terms of all-arounder performance (climbs + flats).

Here’s how the new Dogma F is described in the Zwift Drop Shop:

“Seven of the last 10 Tours de France have been conquered on a DOGMA, and the latest generation is now ready to continue that legacy of success. This is the culmination of all of Pinarello’s skill and experience, a masterpiece of engineering that offers advancements in handling, comfort, and aerodynamics all wrapped in a package that can climb, descend, and sprint with equal flair. Whatever the road throws at you, the DOGMA F is always the right bike.”

Pinarello talks about “the art of balance” when it comes to the Dogma line. And this is something they’ve been fine-tuning for a long time, trying to find that perfect blend of aero efficiency, light weight, stiffness, comfort, and handling. This would lead you to believe that the Dogma F would be a good all-arounder on Zwift.

But IRL performance doesn’t always map directly to Zwift performance, so we ran this frame through our standard tests to learn how it performs in Zwift. And the results were… remarkable!

Here’s everything you need to know about the new Pinarello Dogma F in Zwift.

The F turns in precisely the same flat test time as the Trek Madone and Cannondale SystemSix, two frames featured on our fastest frames list. Congrats, Pinarello – looks like you made the cut with this iteration of the Dogma!

The new Dogma turned in a time of 51:20 on our test course (two laps of Tempus Fugit), which is 3 seconds faster than its predecessor, the Dogma F12.

By comparison, the fastest frame in game (Specialized Venge S-Works) turned in a time of 51:18. (Both of these test times were done with Zwift’s stock wheelset, the 32mm carbon). Two seconds over 50+ minutes won’t even be noticeable in a typical Zwift road race (read “Does Bike Choice Matter on Zwift?” for more thoughts on this topic) so if you want to race a Pinarello, now’s the time!

The Dogma F is rated 4 stars for weight, while all the previous Dogmas were rated at 3 stars. So we expected this frame to climb better than the earlier versions. Still, we were surprised by just how quickly it ascended the Alpe! It turned in the same time as the Trek Emonda, which was the best climber in game for years.

The Dogma F climbed Alpe du Zwift in a time of 48:59. By comparison, the standard Zwift aero frame turns in a time of 49:31, the three former top climbers (Specialized Tarmac Pro, Cannondale EVO, and Bridgestone Anchor RS9s) made it to the top in ~48:58, and the new best climber (Specialized Aethos) completed the test is 48:49. (All of these test times were done with Zwift’s stock wheelset, the 32mm carbon).

So the Dogma F finally made it onto our fastest frames list due to its zippy performance in our flat test. And it also climbs very well. It’s not quite the most aero frame in game, and not quite the fastest climber – but it’s the new best all-arounder, replacing the Canyon Aeroad 2021.

That’s right: the Dogma F beats the Aeroad 2021 (just barely) on the flats, and trims 5 seconds off the Aeroad 2021’s time up Alpe du Zwift! It’s the best all-arounder frame in the Drop Shop today.

Astute racers will be asking if the Dogma F will finally unseat the Tron bike from its top all-arounder status. While the Dogma F is closer to the Tron than any other Zwift frame, the short answer is: it’s not quite fast enough on the flats.

The Tron bike is just a bit too aero for the Dogma F to keep up, unless you put a disc wheelset on the Dogma. If you do that it ties the Tron bike, or perhaps beats it by 1 second on the flat test.

But if you climb Alpe du Zwift with a disc wheelset on your Dogma F, you won’t beat the Tron.

Your wheelset choice with the Dogma F will determine if it outclimbs the Tron, or outpaces it on flat ground. But no wheelset currently in game will let you do both.

As a result of this frame’s top-of-the-heap all-around performance we’ll be updating the following posts soon:

The new Pinarello Dogma F has unquestionably unseated the Aeroad 2021 as the top all-around frame available in the Drop Shop, even if it can’t quite keep pace with the Tron bike. But the Canyon Aeroad 2021 is still a smart choice for beginning Zwifters, since it’s available at level 10+ for only 568,000 Drops.

So, with it’s climbing performance as it is, would it have an edge on the Venge in hilly race like Figure 8 or Cobbled Climbs?

If one frame is better climbing, with another better on flats, which is better in a particular mass start depends on if the hard efforts are on the climb or the flats or the descents. On the Bologna time trial one-way, for example, average climbing and flat times for a net time, since it spends roughly equal time doing each. But if it were a mass-start and people just sat in on the flats, that would neutralize the flats, and it would come down to the climb. But I’d say a default is to weigh Eric’s climbing and flat performance… Read more »

Amazing review again thanks Eric! Saving my drops for something bigger. Hopefully, someday!

Have you done these tests with the older equipment at the same time? I think the numbers are off, and maybe because of the new game dynamics. Ie, different lines around corners now. One famous example is the final turn in downtown dolphin, we don’t veer wide like we used too.

We haven’t retested ALL the old stuff recently, but we’ve spot-tested some of them and confirmed that they’re still getting their same old times.

Since the tests are run firewalled with no other riders around, things like pack dynamics changes haven’t affected timings as far as we’ve seen.

Re-test the lightweight wheels is my tip.

Did that last week. 😜

So, not this week then, this week the difference with lightweights and the new rovals is not 2 seconds… the test I saw was 0.4 seconds, done back to back.

What test did you see that was .4 seconds? And how was that test set up?

We tested it last week, yes. But on the new version. 🤫

@Eric Schlange – Am I correct in saying that the line you see in game doesn’t actually affect where you are since all riders are represented on the server side as a point on a line? The only thing that would affect the older equipment is if they actually updated the physics associated with that piece of equipment right?

@Rick Wenger – sort of. Zwift COULD change the way we are autosteered around turns, perhaps having us cut corners perfectly in solo mode. This might shorten our time up the Alpe. But it would shorten ALL equipment’s time up the Alpe, which would mean the time gaps would stay the same. So yes, Zwift would need to change the actual CDA or weight of an item for individual timings to change meaningfully. What you see in game in terms of your position is determined client-side, not server-side. And that DOES determine your actual timings. Zwift’s servers simply record that… Read more »

So the frame is up there with cervelo S5 or felt AR and venge sworks in overall performance? Was saving drops for a non tron events/races after getting a TT. Good frame to do the mur and mt zwift classic race or norsemen 7 horsemen ride in a couple weeks?

So in the span of a few weeks we got a the best gravel bike, climbing frame, climbing wheels and all-around frame. That’s quite the power creep! But i honestly prefer that to some middling frames that i would never touch.

I’m extra glad for the new all-around frame makes mixed course selection vs TRON more interesting and competitive. It gets boring when TRON is easiest choice for nearly every route that falls between the Alpe and Fuego extremes.

I think this bike will be a tron killer for most races. With the right wheels it will climb faster than the tron and be just a little slower on the flats, and in a race the flats are usually in the draft. Unless its pancake flate, and in that case the venge S-works with the disc wheel is probably a slightly better option. Im interested in seeing the update on the scatter plot

That’s a good point, Yousif. If the climbs are where you need help in a race (and that’s generally the case!) then this bike may be the way to go… a better choice than the Tron. I’ll be updating the scatterplot once I’m back from vacation…

Thanks for testing the hot new stuff so fast. So, you deserve the vacation break :-).
It’s great to have some new kings in-game but these 3 newcomers destroyed my current Drop-Shop-Strategy. Account was empty, so it’s a looong way to collect these ~2 million drops 🙈.
One more question to Eric depending your scatterplot-times : do you run new tests with the real frame-wheel-combos or do you “only” add up the saving seconds from the separated tests for frames and wheels with Aero & Carbon basic stuff ?

I run tests with the actual combos, because I’ve found that the combinatorial effect isn’t always as simple as A+B. Not sure why!

Many thanks and good to know. Then I’m looking forward very interested which top-performer-combos you will test and especially I’m excited to see how strong the Dogma F & Aethos will perform with the 858 & 7.8. I hope that the Tron will have some hard opponents depending future bike choice thoughts.

Anyone else got this bike, and the spray can doesn’t actually change the colour? ….or am i missing something?

Cervelo S5 2020 with DT Swiss Disc is fastest overall. Harrogate doesn’t have long or steep enough climbs for lighter bikes to have an advantage over the aero bikes.