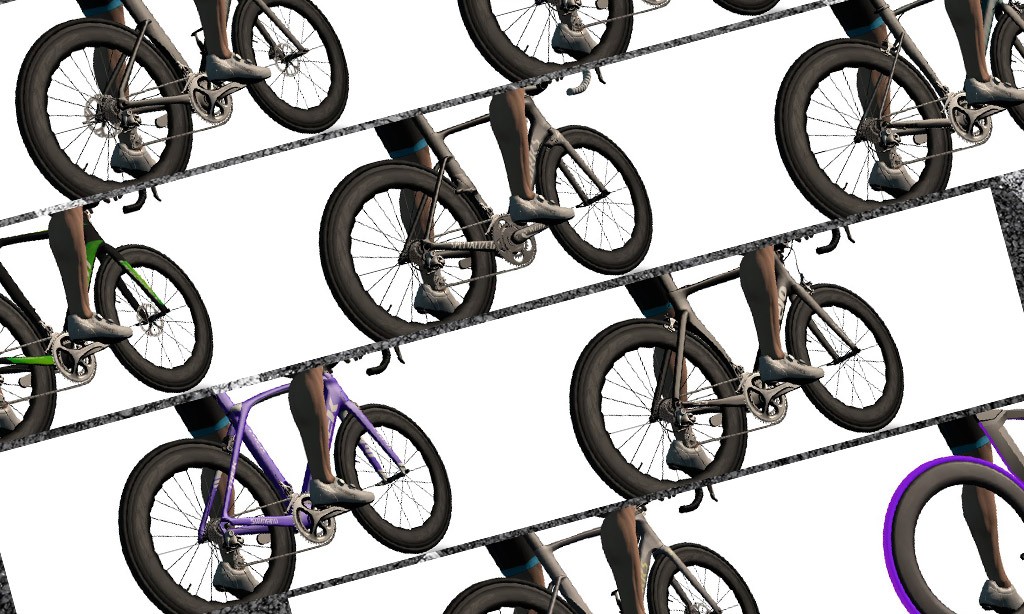 Your choice of bike frame influences your Zwift speed significantly. And Zwift’s Drop Shop gives us access to a pile of frames: 55+ including the Tron and TT bikes!

The big question for racers is: which frameset is best?

We’ve been hard at work in our lab testing wheels and frames, and this is the third in a series of posts giving you some solid, data-driven answers. Read more speed tests here >

The “which bike frame or wheelset is fastest” question isn’t as easy to answer as you might think. Each piece of equipment has unique weight and aerodynamic (CdA) values, making them perform in ways that mirror outdoor physics. Lighter items perform better on climbs, while more aerodynamic items perform better on the flats. Differences between options will also be magnified or minimized by your own power levels, drafting abilities, and more.

Your best Zwift setup, more than ever, depends on your specific situation.

Below you will find the fastest draftable frames for flat and rolling courses. This does not include TT bikes, which cannot draft and are in a list by themselves. “Flat and rolling” covers most routes on Zwift, with the exception of anything including major climbs like Alpe du Zwift, the Epic KOM, or Innsbruck’s KOM. This isn’t an exact science, but we’re pretty confident in our findings thus far.

This list is based on our recent speed tests using the Tempus Fugit route.

The S-Works Venge has just a slight aero edge on the other fast frames, consistently turning in times ~1 second faster on our test flat course when paired with the fastest wheelsets. It also climbs just a few seconds faster than the Felt AR and Cervelo S5 in our Alpe tests, so it definitely deserves the #1 slot.

The AR performs identically to the Cervelo S5 in our flat tests, but has just a slight weight advantage on climbs, so we’ve slotted it just above the S5.

The Cervelo S5 + disc combo used to be the fastest non-Tron combo available in Zwift, but when the S-Works Venge and AR arrived on the scene the S5 had some company. Still a speedy beast, though.

The Madone is a solid race machine and the easiest to attain of the top frames, being level-locked at only 20. It turns in a performance on par with our top 3 picks on the flat test, but is a few seconds back on the Alpe.

Cannot be purchased, must be unlocked

The Tron bike may not be at the top of these rankings, but keep in mind, if you don’t have the Zipp 858/Super9 wheelset to couple with one of the fast frames above, the Tron is faster. Watch out, though: it’s not the lightest bike, so if you want maximum vertical speed you’ll want to look elsewhere.

This is the original Venge ViAS by the looks of it, and it is a slippery frame indeed. It’s a heavy bike, though, performing worse than the Tron up the Alpe. So look elsewhere if your race involves any significant climbs!

One of the original “Fast 5” from pre-Drop Shop days, the Aeroad still turns in a solid performance on flat/rolling routes, and climbs just a bit better than the Specialized Venge or Cannondale SystemSix.

The frames above are separated by just 3 seconds on a ~50-minute test on the Tempus Fugit route at 300 watts with a 75kg rider. That’s a slim margin, and one you’re not likely to notice in the craziness of the Zwift peloton.

There are other frames not far behind those you see above. See our speed test charts for a complete list.

A Note About Wheelsets

It bears mentioning again that the frames listed above only beat the #5-ranked Tron bike if they are paired with the Zipp 858/Super9 wheelset.

Since that wheelset is level-locked at 45+, many Zwifters will not have access to it. The Zipp 808/Super9 wheelset will put you basically on the same level as the Tron, and any other wheelset will see you 5 seconds or more behind the Tron bike over our 50-minute flat test.

Time to climb? You’ll want a different frame than those listed above, because as cyclists know, weight (not aero) is what matters on longer, steeper climbs! Here’s the list of top climbing frames on Zwift >