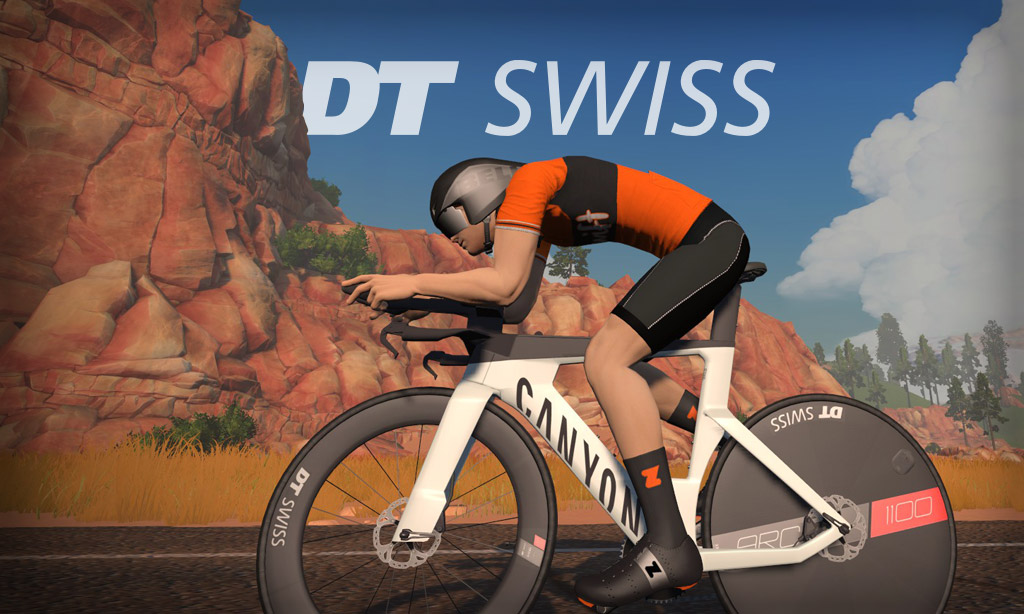 Zwift’s August update includes a fresh wheelset from DT Swiss: the “ARC 1100 DICUT DISC”. This is DT Swiss’ second wheelset in game, with the first being the popular ARC 1100 DICUT 62 all-arounders.

Released in August 2021, the IRL version of the wheel is disc brake-only and made to complete DT Swiss’ aero lineup. On the virtual side, the wheelset is the most expensive one in Zwift: 1,579,800 Drops, for level 42+ Zwifters. Rated at 4 stars for aero and 1 star for weight, here’s how it’s described in the Drop Shop:

“The new ARC 1100 DICUT DISC is made to aerodynamically maximize your performance on flat to undulating courses with cutting-edge technologies. Developed together with aero experts from Swiss Side, the full carbon rear disc wheel is made for disc brake bikes only and with its 20 mm rim inner width optimized for wider tires to reduce rolling resistance and increase comfort. At its center is the 180 DICUT hub with Ratchet EXP System and SINC ceramic bearings, the jewel in its crown. The ARC 1100 DICUT DISC inspires every time trialist and triathlete to pedal even harder.”

According to DT Swiss’ own website, this wheelset saves around 2 watts compared to Zipp’s 808/Super 9 disc. This is intriguing, since any Zwift racer worth their sweat towel knows that the Zipp disc wheelsets are the fastest in game (with the 808 wheelset perhaps 1 second slower over our 50-minute flat test than the 858 disc wheels.)

Will the new DT Swiss disc outpace the reigning kings of Zwift racing wheels? That’s what we wanted to find out, so we ran the new wheels through a battery of tests to learn just how well they perform on Zwift’s virtual tarmac. Here’s what we learned…

But First: What’s On the Front?

This wheelset is called the “ARC 1100 DICUT DISC” on Zwift, but really should be called “ARC 1100 DICUT 80/DISC” in keeping with Zwift naming conventions and to provide clarity to what’s actually on the front of the wheelset.

As you can see in this animation, the front wheel which comes with the new disc wheelset is deeper than the ARC 62 wheelset. It’s the ARC 80 wheel, the deepest wheel DT Swiss offers, and the one paired with the disc in their own tests.

The ARC 1100 DICUT DISC is rated at just 1 star for weight, so we figured its time up the Alpe wouldn’t be anything impressive compared to other climbing wheelsets. But how would it compare to the fast aero wheels?

These new wheels turned in an Alpe du Zwift time 1 second faster than the Zipp 858/Super9, meaning the DT Swiss disc outperforms the Zipp both in climbs and on the flats.

A 6.5 second gap over 50 minutes is massive in Zwift racing, and corresponds to ~2 additional watts of power, matching DT Swiss’ test results vs the Zipp 808/Super9 shown here. Because of this, the new disc wheel from DT Swiss is going to be purchased by Zwift racers everywhere – assuming they’ve got 1.5 million Drops to spare and are at level 42+!

With TTT races often decided by just a few seconds, this wheelset is a must-buy for time trialists especially.

Given the standout performance of the DT Swiss ARC 1100 DICUT DISC wheels, we’ll be updating the following posts soon:

The Tron bike is 3 seconds slower in our flat test than the 858/Super9 discs on the fastest frame available (Specialized S-Works Venge). But this new wheelset will beat the Tron bike by 9.5 seconds.

Unless rules are changed, we predict you’ll be seeing far fewer Tron bikes in community races. All those blingy light bikes will be replaced by fast frames running the new DT Swiss disc.

Zwift’s Esports Rules prohibit the use of disc wheels in top-tier “pro-level” Zwift races. They are allowed in time trials, of course, but not in draft-enabled road races. Perhaps it’s time for community race organizers to do the same.

I’ll take the credit for Zwift brining this out now since I finally spent about 4 million unused drops on the 858/Super 9. I used them for all of a week before needing to replace them with this. At least Zwift is giving us new routes and a few new bits of top kit so we don’t just sit on a pile of ten million drops with nothing to spend them on.

Thank you for your sacrifice. I just achieved level 45 but just had a feeling to put off buying the 858 disc for some reason.

The best climbing wheels are only 25 seconds faster than a disk setup up the Alpe? That seems a bit odd.

Given a 75 kg rider with 8 kg of bike + kit = 83 kg baseline, that corresponds to around 700 grams added mass which seems about right. Maybe you under estimate the importance of body mass, versus bike + wheels, when climbing.

Agree with you, the not allowing disc wheelset in races outside of TT or TTT to match IRL rules for everyone not just the premier/pro league people. Atleast there will be more variance in frame/wheels setups for races now then half to mostly tron at higher cats or many events which adds to racing difference either plus or minus between racers that should make better racing as as long the rules stay the same.

Literally 1 week ago I unlocked the 858/Super 9 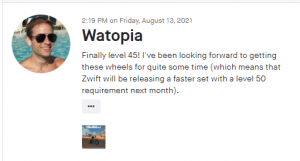 You were wrong though, not a month, just a week XD

I was 30 minutes away from buying the 858/Super 9s. But don’t despair just yet, in 2020 the equipment specs (Canyon Aero?) were changed a month after the release cause they were faster than Specialized Tarmac Pro. I may have the names mixed up but specs were changed after we had all dropped the drops :-). Not getting caught again, waiting for the September update before I’m buying.

I realise this must be somewhere down the bottom on the list of Zwiorities, but one welcome change to me would be to restrict Disc sets to TT bikes only. Then allow drafting off TT bikes if the event is set up as TTT event mode (shouldn’t be too difficult to create). It hurts the eye to see Disc wheel sets in scratch races, but those glowing bikes and road bikes during flat and rolling ITT and TTT events aren’t quite pleasing either. Last, it would be nice to have road bike upgrades (Ceramic bearings, faster tire, lighter saddle, whatever… Read more »

Here’s a question I may have missed the answer to previously. I assume companies pay Zwift to have their kit in the game? If so can they pay more to make sure their stuff is the fastest/lightest? Or do Zwift base it on some kind of IRL data?

This is a question I’ve asked Zwift several times, but never gotten an answer. My guess is they don’t have a formalized process for determining IRL performance levels then bringing those into the game.

That said, as far as I know, there isn’t money being paid for performance.

I’m almost positive big companies don’t get to advertise there products to hundreds of thousand of people for free, most likely companies pay for the performance and the level at which they unlock, zwift only has to make them slightly faster than the last wheel for everyone to grab a pair. I mean i never new about the DT swiss disc wheels, but now i think they will go nice on my TT disc brake bike 😉

“Zwift hasn’t answered me….as far as I know it isn’t happening” hmm, those statements might be connected.

i understand Specialized is an investor in Zwift. … I am sure it is purely coincidental that their frames and roval wheels tend to be the best performers.

Zwift really need to just create aero, all-rounder and climbing bike templates along with disc, deep, mid-depth and shallow wheel templates. Any specific bike would simply be a skin.

I was literally just thinking exactly the same thing.

Yes, that time savings is large and worthwhile for steady-state time trials.

It is marginal at best for mass start. Too many other factors. Yes, it does give you a slight advantage. But overall random variations in draft depending on where you sit will make a larger difference.

Easy to say “it’s marginal”… harder to pick anything but a disc wheel when it’s actually time to race!

I do it all the time, I actually go even further into the climb and away from aero then just ditching the disc wheel.

Guess I’ll be buying some new wheels tomorrow and putting the Tron back in the garage. Now, the next question is, how does the new Cervelo S5 frame match up against the top dog S-Works Venge?

Zwift should have set the Level Unlock for these at 60.

I see what you did…protested these wheels and requested new levels all at the same time. I won’t give up my Tron Bike completely as I’m proud of the time it took to get it. But, I will check to see if I currently have enough drops to buy this new wheel set

Please sir, can I have some more Drops ﻿😂﻿

Organize races with only one kind of bike, all players be restricted in same frame&wheels, accept results those guys only in your club. That would not let u be worrying about what is the best benifit on bike setting again. But it seems zwift without such kind of game strategy.

Hi Eric,
This is random but how do you unlock this kit? I see lots of Zwifters wearing it but I don’t know how to get it. 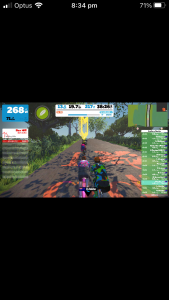 That’s the Zwift Prism 1 jersey, I believe. Unlocked at level 46.

Oh thanks so much

Do you have any data for disc wheels on TT bikes? Perhaps I’m not looking in the right place, but I see only data for TT bikes with the Zwift 32 mm carbon wheels.

There’s some scattered about, but we’ve stopped testing specific frames coupled with specific wheels, because it’s a waste of time. Now we test all the frames with the same 32mm wheels, and all the wheels with the same Zwift Aero frame. Then add the differences together to learn what the combined advantage will be.

People don’t race on glowing space bikes either? The list is endless. Zwift is far from being a simulator.

Hi – I’m updated and level 50 but I can’t find the new DT Swiss wheels in my garage. Am I missing something? Thanks