Fastest Bike Frames and Wheels at Each Zwift Level 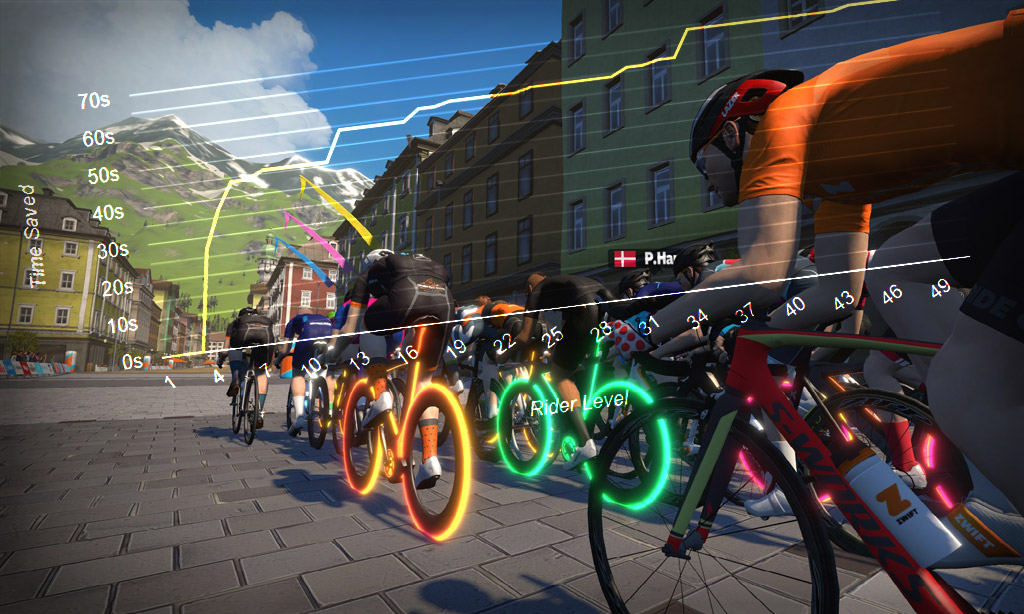 If you’re racing on Zwift, upgrading your frame and wheels can cut some significant time off of your efforts. But figuring out where to spend your hard-earned Drops can be confusing! So we’ve put together this table which lists the fastest frame and wheelset available at every Zwift level.

(Keep in mind this list applies only to flat and rolling routes. The list below is essentially a simplified, flat-race-focused version of our complete Zwift Shopping Guide. If the climbs in your race last more than a few minutes, you may want to consider a more climbing-friendly setup.)

Want to keep it simple? Just purchase each recommended frame or wheelset as soon as you level up. Don’t have enough Drops? Keep riding – you’ll get them soon enough! (And you might want to ride near a Pace Partner so your Drops add up more quickly!)

Times above based on our flat speed tests, done with a solo 75kg rider at 300 watts over two laps of Watopia’s very flat Tempus Fugit route. Our test rider typically completes the route in 50-51 minutes.

What About the Tron Bike?

The Zwift Concept Z1 (Tron) bike is 67 seconds faster than the stock Zwift Aero+32mm Carbon setup. The fastest setups available (Cervelo S5, Specialized Venge S-Works, or Felt AR frames combined with Zipp 858/Super9 wheels) turn in a time ~3 seconds faster than the Tron bike over our ~50-minute flat test course, but only when coupled with a disc wheelset.

So one way to look at it is: until you have a disc wheelset (level 35+), the Tron bike is your fastest option on flat/rolling routes.

We didn’t include the Tron in the chart above since you can’t separate the Tron’s frame from its wheels. But it’s certainly a bike worth unlocking. Here’s how to do that >

The biggest performance gains come early in a Zwifter’s level progression. Here’s how much time you would be saving at each level if you upgraded to the recommended setups above:

You can see that by level 6, 63% of the overall possible improvement has already been achieved (44 seconds out of 70 possible). By level 25, you’ll have made an 84% improvement. And by level 35, 99% of the possible time reductions have been made.

Another way to look at it: once you’ve hit level 35, the only way you’ll get faster is by racing smarter and training to get stronger!

Hopefully this helps you select a bike for your next race, no matter your Zwift level. Got questions or comments? Post below!

What about the Lightweight wheels? In a flat course like this, ain’t them worth mentioning?

Lightweight wheels are for climbs, not flats

These assessments are really useful Eric, thanks. The thing that confuses me is how much rider weight should be a factor in any kit choice. So, if you’re 85kg+ are you better off going for a lighter set up on a flat/rolling course (eg the kind of Tarmac Pro + Enve 3.4 you might normally select for for a hill race) vs a lighter rider (eg the 75kg person in the test) who might be able to go for heavier but faster set up (such as Venge + 808s)? Or should you simply go with the combinations above no matter… Read more »

I don’t consider weight in kit choice at all. I DO consider my strengths/weaknesses (where I struggle and where I find the race “easy”). Example: when I get dropped, it’s on the climbs. So if there’s a rig I can use which makes those climbs faster, I’ll go with it.

But on flat/rolling courses, climbing rigs don’t make the climbs faster! The climbs just aren’t long/steep enough for a light bike to make a difference.

Thanks Eric, that’s really useful. Hills are where I get dropped too so I’ve been making the trade-off of a more hill-friendly rig at the expense of flat speed. I can see the combination of the new Canyon + DT Swiss wheels becoming my go-to for most rolling-ish courses (I’m not a Tron fan) – it seems a pretty good compromise. Cheers.

Sorry for the question, I didn’t see, but it is. Tks!

Great list!! Gives all the information we need! Thanks Eric

So in the end, only till you can buy the Zipp 808/Super9, the Tron is faster?

Thanks for this great list Eric! Just purchased the DTSwiss Arc 62’s yesterday after seeing it was a “must buy” on the shopping guide article. I really like the simplicity of this info layout – well done!

IRL you have to know the critical part of the race and be set-up for that. If you are on a super fast on the flats rig, but the race attack will most likely happen on the climb, that needs to be considered. Where will the race redline? Wonder how much this crosses to Zwift?

Maybe the fastest accelerating off the starting line bike? haha.

I agree with this philosophy if picking a bike. One challenge we have, though, so it’s hard to see differences in short climbs between bikes. On the Hilly KOM, for instance, a climbing bike will often be slower or the exact same time as an aero rig. You only see the differences on longer climbs.

But that COULD be because Strava rounds to the nearest second. And there’s the rub…

something to look at but ive always felt like the tron works a bit better over gravel than normal roadies do.

We’ve tested it – rolling resistance is the same for Tron wheels as other road wheels.

Thanks for the article and doing the tests. It is great help when knowing how to sprend drops in app.

I am level 13 and just crossed a million drops, I guess it’s time to buy some wheels and grind to level 14.

In our tests it does not.

This is brilliant, such useful information and a perfect and easy way to read and digest it all. I would love to see something like this with regards to best climbing rigs at each level.﻿👍﻿

Thanks for this Eric. His level 33 a while ago (34 now) and, for some reason, had got in my head I was still a couple of levels away from being able to get the Venge. Now snagged it thanks to your prompt (just a pity you can’t change that bland colour scheme).

Also realise I am only a few thousand XP away from getting the 808/Super9 combo so definite incentive to get off my backside and get some more rides in.

Would love to see the bike graph for climbing as well. Also, even more is to have you guys create a better way to see what “rides” we’ve done and/or haven’t done without having to go in and out and back again to look. It’s super cumbersome as it stands. Also, losing power avg of a ride by the time you complete a ride and then save the ride is terrible. Small gains matter and get harder to obtain with advanced fitness. Then losing a documented PR due to the save delays is really annoying. Thank you!!

have the tron bike, never rode it. don’t like its look.

interesting to see that wheel choice has 3x the impact of frame choice..

Yup. It’s always been that way!

Depends on if you want the fastest overall time, or to hang with the pack up Box Hill in a race!

Is it me who misunderstood the list or is it wrong?

It’s available at level 10 now. I repeated it on 13 because it’s the fastest setup for that level, when paired with the 808 wheels.

A bit confusing perhaps. Maybe I’ll remove the repeated elements from the table.

Excellent chart and what to get for the drops at certain levels. The blank spaces makes sense to me as just repeating item as would quotation marks in the that space. Would love to see how some the top climbing frames compare times at their respective levels with the necessary wheels as above or to start level. If possible a chart like above for the climbing frames comparing to aero frames.

Excellent post, very useful! I saw where someone asked for a similar post for climbing rigs, I would also be interested to see a similar table for the TT bikes as well.

The Madone is actually 1s faster in our flat tests than the Aeroad 2021… hence its inclusion here.

Eih thanks a lot Eric, all clear my fault

Which bike/wheel combination is fastest for a rolling pack ride? Presumably a rider would already benefit from the draft of other riders, which would somewhat negate the need for an aero bike. Do your results from above still hold or is a lighter bike such as the Tarmac with Lightweights preferable?

Nice work Eric, but a quick and somewhat specialized question. What would be the fastest bike for attempting to get the 100 kph bagde, and what would be the best decent to try this in. Down from the radio tower? I am 88kg and are currently at level 29 (I also have the Tron bike). Should I go for the Tron bike, a TT bike or Cervelo S5 + 808s? I have enough drops to by whatever my level allows.

Use a TT bike with the 808s. You can change bikes at the top so you don’t need to climb up with this setup.