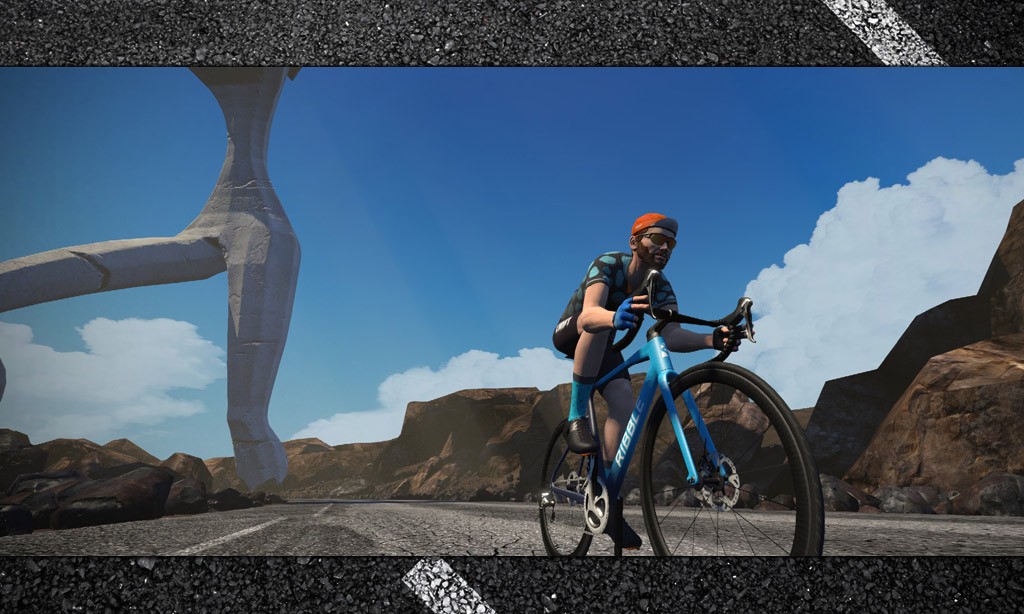 With its impeccable performance and versatility, the Ribble Endurance SL R series can be fine-tuned for riders of all levels of experience and ability. This high-performance frameset is superlight and the truncated aerofoil profile of the tubes makes it both the lightest and one of the fastest packages available.

Sounds pretty snazzy. And at a cost of 390,500 Drops it’s one of the more affordable frames in the Shop, plus it’s available at level 7+ so it’s quite accessible. But how does it perform?

The Ribble Endurance is rated 3 stars for weight and 3 stars for aero by Zwift, meaning it’s not going to be a top performer on the flats or the climbs.

That said, it performs quite well where aero matters: on flat/rolling courses.

The Ribble Endurance turns in times within 1-2 seconds of the Zwift Aero frame on our climb and flat tests. To be specific, the Endurance is 2 seconds faster up the Alpe, and 1 second slower on the flat test.

While it won’t make our shortlist of fastest frames for flat races, the Endurance is only 5 seconds behind the last bike on that list, which is great considering you can get it as a level 7 Zwifter.

If you’re just getting started on Zwift and want a zippy racing rig for flat/hilly routes, the Ribble Endurance or Zwift Aero are your two best options until you get to level 13 where you can buy the Cervelo S3D, or level 14 with the Specialized Allez Sprint.

The Endurance also includes a color slider, which not all frames in the Drop Shop support. This lets you dial in the look to just what you want.

Have you tried the Ribble Endurance yet, indoors or out? What did you think? Share your thoughts below!

Pity it’s not the Electric version, could do with a few extra Watts now and again. 😕

When will they get rid of the meaningless 4 star ratings for bikes and wheels? A more advanced rating system is sorely needed. Not everyone has time to read through blog posts that independently rank this stuff.

It’s not meaningless–it’s just simple, not very granular. I think the star rating is exactly what is needed, actually–it keeps things simple, which is what the vast majority of Zwifters need.

They COULD tell us the exact weight of the bike, and some sort of aero number. I would like that. But that’s not Zwift’s style–they try to keep it simple and fun.

But what does a user get out of seeing 15 different bikes all being 3 stars for weight and aero when in reality there are some pretty substantial differences between those 15 bikes? Might as well make it binary. Use a “good” or “bad” rating for weight and aero. Provides the same amount of value (meaning none).

Case in point. The bike featured in this article has the exact same rating as the tron bike. There is no way that these 2 bikes are comparable.

Eric, I’ve always wondered, is it known if bike manufactures pay any royalty to Zwift to put their bike in the game? And if so do you think or know if the performance of those bikes are affected by any strong arming from more powerful manufactures (Specialized ) What would be a awesome comparison would be a real world test between two bikes in the game on a real course. Like for example the UCI Richmond course you could take a Trek Madone and a Giant Propel and put a rider on the course at 250w and see if the… Read more »

As far as I know, bike makers aren’t paying money to Zwift–that’s what Eric Min said years ago, at least. It could have changed. But I highly doubt Zwift would open themselves up to “pay for performance” in game… that’s a slippery slope to be sure.

Ahh, you started to post something I have wanted. Best bikes per level. The top 5 charts sometimes have nothing until level 38… would be nice to k ow what is a good buy from 1 to 50.

To be honest, I might just get this one because I own one of their gravel bikes, it’s why I use a canyon ultimate on the steep stuff (I have an endurace). And I’ve got a long way to go level-wise before I get anything much better than this or the zwift aero I already have.

On a slightly different topic and because I can’t seem to find any article or discussion about it, what is the best setup for a Bologne TT? Half flat half hill makes it a tough choice: Eric, have you done any testing on frames/wheels for this course specifically? What does everyone else use?

This is probably too late as that stage just ended, but there will be opportunities to make up the stage in Feb, I would recommend a climbing bike if you are doing just the 5mi version for sure. Commit to staying in the pack on the flats where you might work a bit harder, but can take advantage of the draft, and the climbing is slow enough there’s no real aero or drafting advantages to be had, much easier to pull away with a climbing bike. I nipped a W in B doing this, and the guy in 2nd did… Read more »

Can you even get 400k drips by level 7? Is there a guide on farming drips!

Lots of climbing helps … if memory serves you get double the drops when going up a 3%+ gradient.

The colour slider is entertaining, because, when you order your Ribble bike IRL, you can also customise the paint job!

Excellent, I have the Ribble SLR in the real world so looking forward to earring enough drips to buy this… hopefully they do it in black to match mine.