The latest Zwift update is now available on all platforms: Mac, PC, Android, iOS, and AppleTV.

Not sure if your Zwift install is up-to-date? Here’s how to check >

This update delivers a few new bits of virtual equipment to the game, along with tweaks to the popular new route progress bar. Read on for details!

Zwift rolled out the route progress bar in last month’s update, and this month made two improvements:

Two new wheelsets have been added to the Drop Shop:

Shimano just announced their new Dura-Ace 9200 groupset, and Zwift has updated a few of the newer frames to use it. It’s easy to spot – the old Dura-Ace uses a silver chainring and silver parts on the rear derailleur and brake levers, while the new Dura-Ace is essentially all black:

(And just in case you’re wondering: yes, it does appear as though bikes using the new groupset also have a 12-speed cassette in the rear, while bikes on the old groupset have an 11-speed…)

The Specialized Tarmac SL7, Canyon Aeroad 2021, and Pinarello Dogma F frames have been updated to use the new Dura-Ace 9200. According to ZwiftHQ, this won’t change the frame’s performance in-game in any way. But we’re still going to test to confirm since groupsets do have an assigned weight in game which could affect speed.

Here’s the list of fixes and improvements, with some notes in italics from us where warranted.

If you spotted any other changes in the update, please comment below!

I appreciate the route progress bar, and this update is an improvement. Not that my comment makes any difference, but really wondering when we might expect more of the promised Makuri Islands world. I appreciate all the roads we have, and Zwift certainly makes indoor riding WAY better, but I always appreciate new tarmac and wonder when more might appear….

I’m not allowed to disclose specifics re: new tarmac on the way, but let’s just say… it’s definitely in the works!

Thanks for the reply, much appreciated! Always nice to “know” what might be in the works!

Looking forward to some new roads!

It’s officially now too late for the Belgium World Championship course, as the Flandrien circuit, at least, would have been a good addition to the Zwift world. I’m guessing it’s Makuri, most likely Mt Fuji foothills, and if not, French pavé for Paris-Roubaix (since the previous dirt road deficiency was solved with Makuri)

I think Mt. Fuji foothills is pretty realistic(or maybe an entirely different mountain as Zwift has said that they had a lot of freedom in this world), but if it is Mt. Fuji I assume it wouldn’t be the whole climb.

Would be nice to have a separate garage for your favorite bikes apart from all the other bikes and wheel sets. Having a separate garage would make it easier to swop bikes during events. Just a thought, maybe you can convince them.
Ask Eric Min to make me a YELLOW PEAK, PLEASE… I want to be the “Yellow Submarine Sweeper”

I second. Either an option to creatte sets for TT/flat/mixed/climb/etc or a way to delete/sell/donate your stuff.

Maybe not the exact thing you’re asking for but this would be helpful. Upvote if you can.

I tried to get from Zwift info when new remote wil be fully operative but got only blank e-mail with No answer. So i gave up.

Shane Miller has a video about it. This update did integrate the new remote.

I did a ride after updating today and the companion app couldn’t stay connected to save its life. Never been a problem before. Hope it was just a one-off fluke.

Hello, use a bkool pro roller connected by ant + FEC C. After updating bkool does not recognize the roller.

Oh no! Another Zwift update. Haven’t been on today, so I’ll find out tomorrow how many gremlins were riding piggy back with this latest release.

I do like the distance marker on the progress bar, but for multi-lap events it would be much more useful to display the last lap time. Gives you a guidance if yo’re hitting those negative splits 🙂

The pace partner drops multiplier goes up to 2.5X now. I haven’t ridden with a pace partner for a couple weeks but just noticed this today and guessing it’s new. 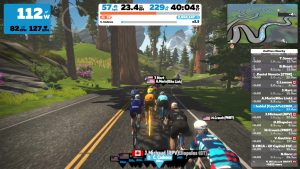 This was already in the last update!

Likewise. My mac couldn’t recognise it as controllable. Hoping for a patch soon.

Since update I have no resistance in erg mode or any route free ride. I just spin at same resistance even when climbing at 10 per cent! Can’t do ZA rides as I spin out on cadence trying to generate power. I have wahoo kickr & Apple TV, no previous issues like this. Checked Wahoo independently and resistance works fine. Kickr & hr connect to zwift on Apple TV so this is a bit weird. Is Zwift not talking to kickr or companion app after update?

I had this happen too. So frustrating.

Same here. Absolutely frustrates the hell out of me, huge embittered that shouldn’t have been introduced. What’s the fix, Zwift

Same problem for 3 days – however I found if I run the Wahoo app after the connection screen on Zwift and fool around with that suddenly the controllable appears and runs fine. I have had to do this for every time I restart the system. Weird – only since the last update…

Same. Saris M2 trainer using Apple TV4K. When using the companion app the trainer controllable isn’t connected (even though it says it is) and I get no resistance. Running w/out the companion app works fine. Hoping for a fix soon.

Has anyone had a fix for this yet? I’ve had to use my iPad but would like to go back to Apple TV, just wondering if anyone has figured out the fix?

Same. Wahoo Kickr using Apple platform. it’s as if someone hashed the resistance coding and inverted it. Uphill REDUCES resistance, downhill REDUCES resistance. IDK what happened, but any sort of free riding or group rides not tied to a structured workout are just a bizarre experience to put it mildly. As the winter months approach in the US, I pray for a patch on this ASAP.

Personally, I wish there could be some indication of lead in to a Sprint. I can’t say I ever learn or have memory enough to be gearing up in time. Also the map in upper right would be great to have some sort of distance shown to aid in this, but also to give some idea of distance on climbs for sure…

Hmmm. The “new” progress bar, which I really, really like, vanished after the update. So did KOM times. I’m running on AppleTV. I rode the Temple KOM 3 times today (Makuri Island) and no KOM times. Another returning bug is some of the pictures I took while riding didn’t get saved or uploaded to Zwift. I’m beginning to dread the updates….

Robin, same problem here. The progress bar has disappeared with this latest update. I’m running Zwift on a Mac. Any fix ideas?

Yeah – mine too! Another bug… Running Windows 10

This morning i complete 2 routes KAPPA QUEST and FARMLAND LOOP in MARUKI ISLANDS, while riding the progress bar disappear and just show pop up when i completed please fix it thanks

Just did latest update and now the event bar with distance for route does not show.

Me to – Apple TV 4k and Android companion app

Zwift is improving all the time, still hoping to see mountain bike trails appear on all the maps, any word on that? The trails on makuri island are well presented and fun!

Does anyone, ANYONE, care about the addition of new bikes, groupsets, or wheels? I assume this is an income stream for zwift and manufacturers pay for their equipment to appear in-game as advertising. For me as a rider (and racer) every new gear drop is nothing but a minor PITA, as I have to re-consider what new combination might give me a half-second advantage in a race. It doesn’t change my ride experience at ALL and I get no jollies out of “owning” a virtual $15,000 bike. But maybe other people do? I’m sincerely curious.

Based on the interest I see on my posts about new wheels, bikes, etc… LOTS of folks care about them.