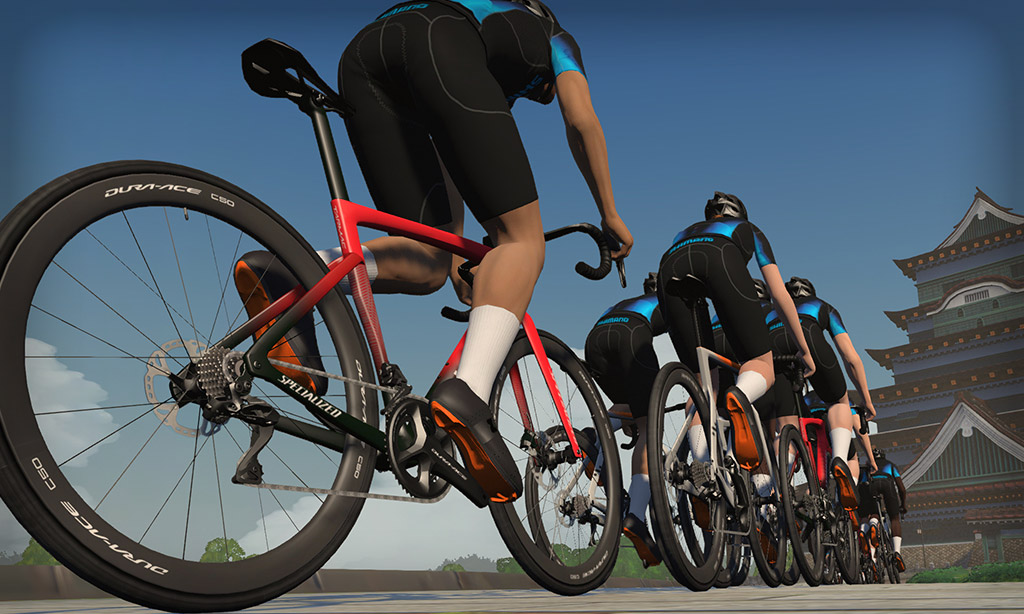 Shimano just released its new DURA-ACE R9200 groupset, and Zwift has automatically applied it to three in-game frames: Specialized Tarmac SL7, Canyon Aeroad 2021, and Pinarello Dogma F. And this week, a sportive series begins which features each of these upgraded bikes. Here are the details…

What Is a Sportive?

“Sportive” isn’t a commonly-used term in the US, but it’s quite common in the UK. It’s a shortening of “cyclosportive”, and it’s sort of a catch-all term that can refer to just about any mass-start organized ride you would pay to participate in which isn’t an official road race.

There’s some overlap between “fondos” and sportives, since they are similar in nature – not an official race, but more of a personal challenge in a group ride setting. But a sportive can also be much shorter than a typical fondo, even just an hour long.

Zwift hasn’t really used the “sportive” term for events in the past, but watch for its future use in events Zwift often organizes with partners that are “shorter than a fondo” group rides and not official races.

Is This a Race?

Ah, the perennial Zwift question. Zwift has five different types of ride events, which you can filter in the Companion app:

This series is defined as “Ride” events. Some riders will join just to ride with others and complete the route. Others will ride these events as races. Either approach is perfectly acceptable. You do you!

Categories in this series are not used to break riders into ability groups, but rather to determine which route you ride.

There are 4 category options:

A and C groups ride the same “longer” route selection, while B and D share the same “shorter” route.

Each stage places all participants on a particular DURA-ACE R9200-equipped bike. But it looks like you’ll be able to pick your wheels – so choose wisely, if you’re trying to go fast! We’ve included recommendations below.

Complete any stage to unlock the Shimano S-Phyre jersey.

Looking a Gift Horse In the Mouth

With its latest update, Zwift auto-upgraded everyone’s Specialized Tarmac SL7, Canyon Aeroad 2021, and Pinarello Dogma F frames to use the new DURA-ACE groupset. It’s like a ninja mechanic snuck into your Zwift garage and upgraded your bikes for free!

The only downside is that our tests show that the new DURA-ACE isn’t performing as well as the old stuff. The upgraded bike frames have slowed by 2 seconds in our flat tests, and 19 seconds in our Alpe climb tests.

It’s a bug Zwift will be fixing ASAP. It’s sort of excusable – in the entire history of Zwift, groupsets have never been upgraded. Attempting to do so has apparently had unintended consequences.

With all of that said: everyone is being put on the same (slightly slowed) frames for these events, so at least we’re all equally disadvantaged. But we wouldn’t recommend racing Alpe du Zwift or any major climbs on one of the upgraded frames until Zwift issues a fix.

“It’s a bug Zwift will be fixing ASAP. It’s sort of excusable – in the entire history of Zwift, groupsets have never been upgraded. Attempting to do so has apparently had unintended consequences.”

How or why would changing the graphics of a groupset affect speed in the game?

Carsten Re. from Germany
Reply to  Brian

I don’t understand this, too ! But many thanks to Eric for testing and knowing about this crazy issue !!! And I hope that all 3 frames will reach the SAME times for Tempus and Alpe again after the bug fix. Eric, please let us know again. Many thanks in advance, I appreciate your support.

Because you’re just “changing the graphics.” Groupsets have an assigned weight (and probably Cda bias) in game, as do other elements like wheels, frames, helmets, etc. It’s a virtual environment you’re building, after all.

Hopefully they get the bug fixed soon! For those in Zwift Academy, they made a big point of doing the baseline and finish line rides on the same equipment, for better apples to apples comparison. I used the Dogma F for my baseline ride . . .

The whole Zwift equipment model is badly flawed. There should be more transparency in bike performance — assign points, then have all bikes with the same points be the same. For example, have three categories of frame (aero, light, all-around), with 4 levels of performance (level 10, 20, 30, 40 unlock). Then have wheel unlocks at level 5, 15, 25, 35, and have aero and climbing and all-around wheels. But then different brands can fill these bins. Is there IRL precedent for this? Of course: Specialized SL7 is an “all-around” frame. It has different component specs. So a 105/Rival bike… Read more »

Have they fixed the bug yet for slowing the bikes down yet?

There was a Zwift update last Tuesday, I’m assuming your post included that and it’s still not fixed? Thanks in advance