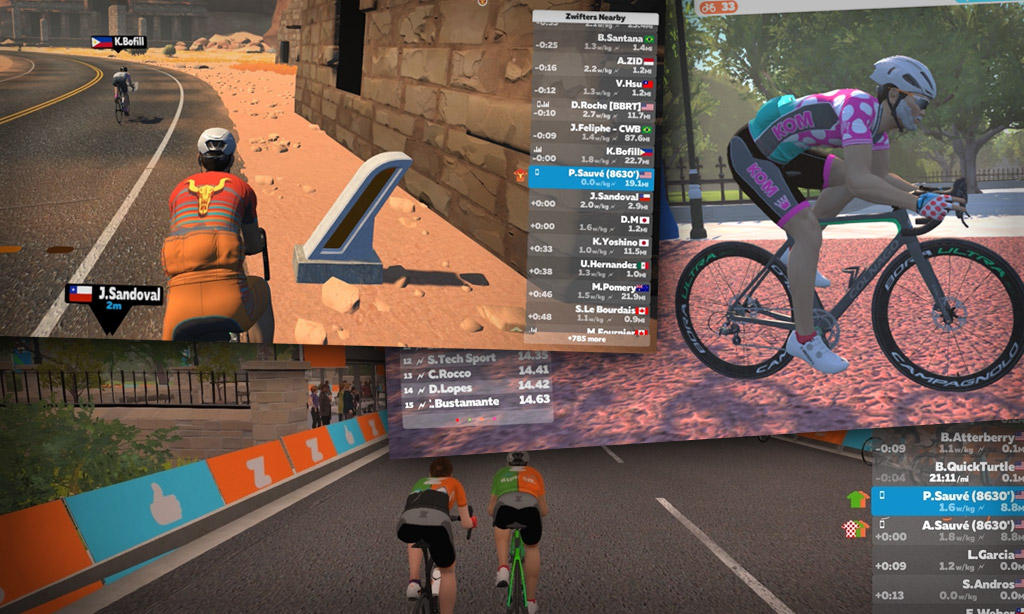 Anyone who has given me a “Ride On” using the Companion App may have noticed from my avatar that I’m more of a jersey hunter than a badge hunter.  Not the jersey/kits you can collect from events or using unlock codes, but those that can be temporarily earned for various routes, climbs, and sprints in each world.  Route badges can be collected just once, but the Leaderboard jerseys can be made into a personal challenge every ride.

Racing on Zwift has never appealed to me.  Among other things, there’s having to schedule around when it begins, including getting warmed up, the tactic seems to make it more like a bunched time trial, and there’s the much-discussed cheating that may or may not be prevalent. Besides, I’m right on the border between two categories – so Leaderboard jerseys are the way I get motivated and push myself.

With that experience, I’ve discovered a few things along the way to improve my chances during each outing. Some are well known and others possibly not quite so obvious. Let’s jump in!

The way the Leaderboards work, you’re competing against riders who have ridden the segment during the preceding 60 minutes.  There’s no controlling this, so if a pro-level Zwifter rode it five minutes before your effort, you’ll be out of luck.  And until a recent update, that individual’s best time was locked in until it timed out 60 minutes later (or they exited Zwift).

As it currently works, riders can also “self-eliminate” themselves by riding a slower time on a subsequent try, even if their best effort remains within the 60 minutes.  For instance, the sprint Leaderboard lists Rider A at 10.00 seconds (with the Green Jersey), Rider B at 10.20, and Rider C at 10.30.  If Rider A re-rides the sprint and now finishes in a time of 10.50 seconds, that erases the 10.00 effort and Rider B now has the Green Jersey.  (Previously, Rider A would remain on the Leaderboard and stay in Green with the 10.00 effort until someone rides faster, the 60‑minute mark, or exiting.)  Personally, I don’t care for this revision as it makes earning combined jerseys more difficult, despite already putting in the effort to achieve a segment.

What should be obvious is that the more riders who are Zwifting, the harder it probably will be to earn a jersey.  The odds that several riders among 10,000 Zwifters will be faster than you is higher than if only 1000 are Zwifting.  But there’s no guarantee that riding with fewer on the course will make it easier to be atop a Leaderboard.  It only takes one!

So that’s what motivates me – can I outride, outsprint, or outclimb those who rode the segment the previous hour before me, and can I keep the jersey in the hour afterward?

Generally, there is at least one route, one sprint, and one King of the Mountain (KOM) in each world.  Exceptions are Paris, with no KOM, and France with no route (although the Marina Sprint earns an Orange jersey rather than the usual Green one.)

Most segments also have a reverse direction Leaderboard.  If earned, you always have to be riding in the appropriate direction to wear the jersey (if not, it’ll still show up next to your name and if you do a U-turn it’ll pop back on).  Segments with no reverse equivalent are certain unidirectional KOMs including Alp de Zwift, Ven-Top, and the Volcano climb.

Designated routes (forward and reverse) that can win the combined Route-Sprint-Mountain are: Watopia Hilly Route, Yorkshire World’s course, Innsbruck World’s course, and Richmond World’s course.  For the others, you have to do some manual turning.  The London Loop has the route and KOM, but the sprints are over at the Classique segment.  France has to be a combination of the Marina Sprint (for Orange) and the various other sprints and KOMs.  NYC’s Perimeter Loop has the route and sprint, but not the KOM.  Makuri Islands* needs more work, and there’s no KOM for Paris.

* Makuri Islands is buggy.  Over the course of the various updates, combined jerseys still are not possible, the Flatland Loop Leaderboard wasn’t seen (initially it was labeled Countryside Tour), the auto-turning took you off route, and the Orange Jersey wasn’t available.  Some issues have been fixed, but as of this writing, if you’re wearing a jersey, it won’t show up as an icon next to your name.  That is until you go off route.  Then the jersey you’re wearing disappears and the jersey icon shows up – for both directions!

** Richmond’s dual KOM and Sprint segments are somewhat confusing, and I still haven’t figured out the logic – for instance, being the fastest of both sprint Leaderboards gets you the Green, but atop just the Broad St. won’t (it has a blue, not green-colored, Leaderboard).  But you’ll still show a Green jersey icon next to your name for Broad St.  It’s similar for KOM.

Besides taking into account the total number of active Zwifters in a world, some jerseys generally see less competition than others.  And of course, winning one will always depend on one’s own fitness, fast-twitch vs slow-twitch muscles, etc.

In my experience Watopia’s Jungle Loop (either direction and with a unique jersey) and reverse Hilly Loop (Orange) tend to have minimal activity.  Sometimes only a few, or even no one, has ridden them over the previous hour despite 1000s riding in Watopia.

For sprints, Fuego Flats (unique jersey), and either direction of both France’s Marina (Orange) and Makuri Islands’ Village (Green) seem to be the least competitive.  I find Fuego Flats odd, given that it usually has 100s who have done it at any given time, but the percentage who sprint it seems relatively low.

On the flip side, some jerseys are much, much harder to get.  I’ve found the most elusive are generally the KOMs, and I suspect that is because Zwifters looking to do a recovery or easy-paced effort, won’t be riding up mountains.  People riding the big climbs tend to put out big watts.

In particular, Alpe du Zwift, Ven-Top, and Volcano see a lot of good competition.  And the first two are not just a few-minute effort!

That’s my life these days on Zwift – chasing jerseys, waiting for Makuri Islands to get fixed, and trying to combine those jerseys that I haven’t already.  I probably shouldn’t have written this, as I may have just decreased my chances.  But hey, that will just make any we do win that much more enjoyable.  Good luck! 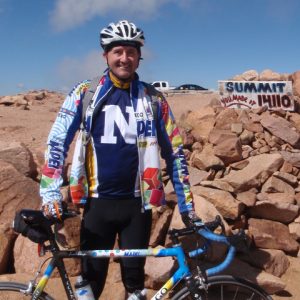 Pete is a retired Navy submariner who first raced IRL back in 1986. These days he works in telecommunications, and when not working, spends time on and off the bike in Colorado’s mountains. He successfully steered his wife, Ann, away from a certain virtual biking that starts with a “P" to Zwift.

I get so many undeserved/uncontested jerseys by virtue of living in a West Asian time zone that just happens to make any morning ride I do right after the change over of worlds.

If you’re the first to ride it, you’ll always be first!

Really interesting article and I admire the way that you have found a way within the platform to keep things interesting and target focused. For me, early on it was “badge hunting” then I focussed on FTP, now I am more keen to try new things to write articles for. You gotta love Zwift and the way it lends itself to being used.

I always find the Letece Express to be a fairly quiet route and the nice short sprint at the far end is usually ripe for a decent time if you get a good head of steam coming out of the U-turn.

Came here worried you were going to spoil the actual technique of grabbing all the sprint jerseys, and am thrilled you left that for people to figure out on their own. 😀

There are several other “hints” that I could have included, but wanted to keep it at a reasonable length.

i got my first KOM a few weeks ago. yorkshire KOM reverse. not hunting or even had it in my mind. just wanted a nice effort. but part way in it said i was 10 seconds under. so of course you have to go. its a short climb. but the last 30 seconds was never ending. i had to step off my bike and lay on the ground after.

Congrats! I hope you took a photo for proof! 😉

Any thoughts on, if the often rather optimistic reported watts, Zpower riders should be a part of the jerseys/leader-boards ?

I’m torn on this. I’ve considered that maybe zPower riders should time out on the Leaderboard after 30 minutes. But I’ve come to the conclusion that as long as the Zwifter isn’t outright manipulating things (ie cheating), then it’s a fair aspect of Zwift. It’s part of the game.
It’s up to Zwift to change the platform, but not to penalize a rider in doing so, just because they have/don’t have a certain set-up.

From racing on Zpower I’ve found that most people seem to be honest. There are always cheaters (or mistakes) and you’ll get those in game too without them necessarily being on ZP. I see lots of hugely unrealistic times on the leaderboards but Zwift are getting better at recognizing them faster and eliminating them.

I do the same, plus I find that targeting certain KOMs, sprints and laps serves as a marker for where you are strength wise.

Fuego Flats seems to be where all my Tri friends go to, so I suspect that’s not uncommon and is the reason why the sprint isn’t contested that much. It’s also a longer effort than most other sprints so that adds to the infrequency of tries.

I do the same and keep a PR spreadsheet. It motivates me and helps me to figure out what jersey(s) I want to attempt by comparing to the current Leaderboards.

That makes a lot of sense as an explanation for Fuego Flats. Thanks!

I also do not like the new self eliminate feature! I thought it was a bug until you wrote about it here.

I wouldn’t have put Fuego Flats on the easy list. Yes, most people are cruising with the bots, but I was very surprised to see you had the jersey with a 37 in the screenshot. Most times i’m riding, it takes a 30/31 (and occasionally you see the head-scratcher low 20’s!).

A lot of luck and timing involved, and I’ll wager the low 20’s was a zPower. I scored it again yesterday, and discovered a new “quirk.”
I was in 2nd with a time of 37.38 (among 764). #1 either timed out or quit, giving me the jersey. I wanted to earn it outright, so tried again and bettered my time to 36.89 (of 836). But no credit for “Took a Jersey” in the post-ride summary. So you can “self-eliminate” to lose it, but can’t “self-compete” to take it from yourself.

Hi, is there a way to see the jerseys you´ve earn. Like the badges or routes finished? If so, where do I look for them? Thanx!

Unfortunately, no. Routes now have two ways to keep track – badges and the check mark when selecting which route to ride.
As I hinted in the article, I take a photo when I win one and then use PowerPoint to create my avatar with all of those I’ve won. I also have a spreadsheet of my PRs, and I use a fill color when I’ve won the corresponding jersey.
Happy Zwifting!