Zwift has many jerseys which you can unlock by entering particular codes. But there is another set of much more coveted temporary jerseys assigned to the fastest male and female riders currently on course.

Green jerseys are given to the fastest riders on course for each sprint section.

There are also a few sprint segments which give you something other than a green jersey:

Polka dot climber’s jerseys are given to the riders with the fastest time up the course’s big climbs.

The standard white jersey with red polka dots is given for most climb segments:

There are also some custom KOM jerseys:

Strong enough to get the best time on Alp du Zwift? You’ll get a special jersey just for that, too.

The fastest riders up Watopia’s volcano climb get a special jersey, but it has no polka dots.

The orange jersey is given to the fastest riders around the main route on a particular course, in either direction.

There is also a lap jersey for the fastest rider on Watopia’s Jungle Circuit loop in either direction. 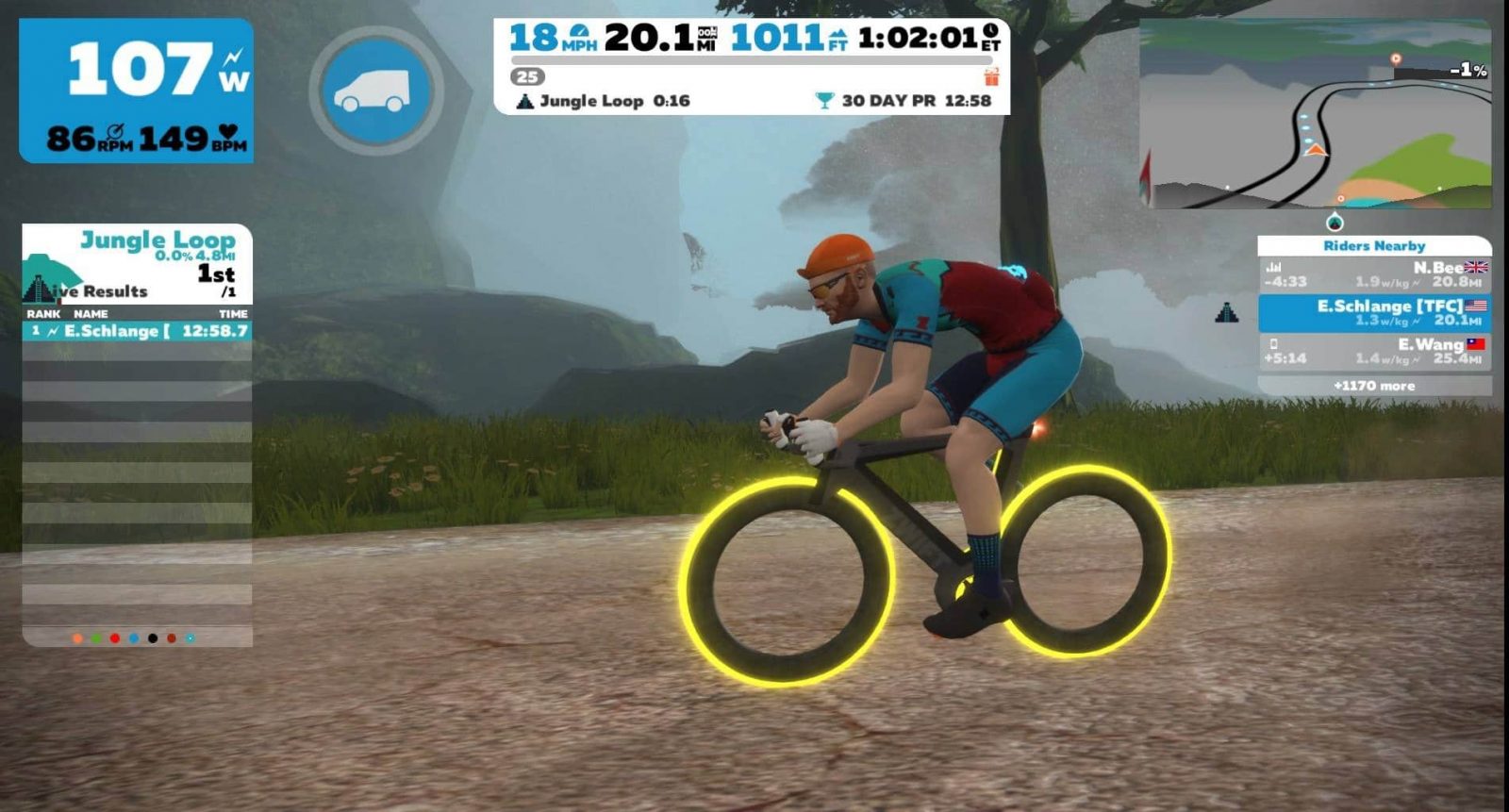 If you’re strong enough to be the fastest rider for more than one of the categories above Zwift will issue you a “combined” jersey.

Here’s a throwback: watch below as Nathan Guerra of Zwift Community Live takes all three on a lap of Jarvis:

Once you get a jersey you keep it for up to an hour in game, or until someone bests your time. If you log out, your jersey goes to the next-fastest person (unless you sign back in within an hour).

A Note About Events

If you score a leader’s jersey during an event, that jersey will be indicated in the rider list to the left, but you will not be given that jersey to wear during the event.

Once the event ends (or you exit the event) you will be given the jersey.

To see the details of the segments and routes mentioned above, see our Verified Strava Segments as well as the Course Maps and Details.

For more info on how the jerseys and timers work, see this Zwift Support post >

Hey Eric, Thanks for this. Two questions 1) Wondering why no (or wrongly colored) jerseys exist for certain sprint segments: Marina Reverse sprint in France is orange. No green jersey for Broad Street fwd in Richmond. No jersey for 23rd Street sprint/climb in Richmond (maybe a split jersey for that one!). 2) While I understand why a jersey disappears when I’m on a route that’s reverse to the one I won it on, I’m wondering why the little jersey that appears to the left of people’s names on the right side rider-board doesn’t appear next to me when I’m riding… Read more »

Earlier today, I *twice* posted the best times at Titans Grove KOM Reverse in one ride, a little more than an hour apart, and Zwift gave me the leader’s jersey for the first time round but nothing the second. Worse yet, my second record smashed my first record by 4 seconds but Zwift didn’t recognize it as my new PR.
Is it how Zwift works? I was a bit disappointed that I didn’t get back the leader’s jersey when I bested everyone for the second time.

I appreciate your information, it’s where I go to learn about anything Zwift. I had a green jersey yesterday and an orange one today. To find out how they work I turned to Zwift insider. I’m just finishing level 26 and looking to get a cervello frame which I’ve compared on your site thanks

How the Race Was Won (and Lost): Utter Confusion in Neokyo

Zwift Racing Tips from a Pro

How the Race Was Won: ZRL Team Tactics On Two Bridges Loop