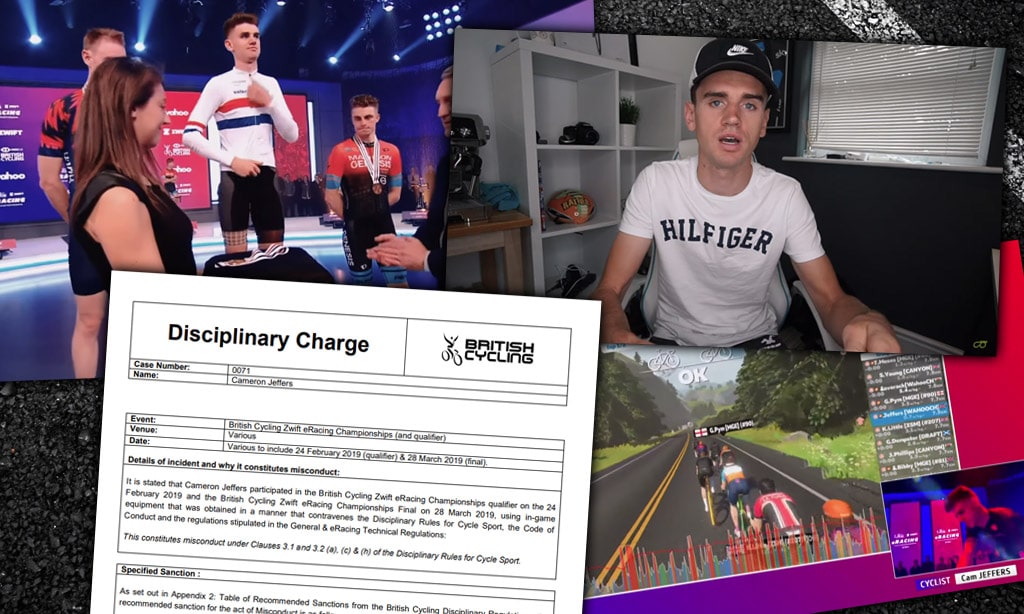 The Zwift racing community is buzzing about a recent announcement from British cycling that Cam Jeffers (Team CyclingHub) has received a disciplinary sanction from British Cycling.

Since this is the first Zwift race sanction involving paid fines and suspension from racing, I figured it was worthy of discussion.

What Are the Charges?

It is stated that Cameron Jeffers participated in the British Cycling Zwift eRacing Championships qualifier on the 24 February 2019 and the British Cycling Zwift eRacing Championships Final on 28 March 2019, using in-game equipment that was obtained in a manner that contravenes the Disciplinary Rules for Cycle Sport, the Code of Conduct and the regulations stipulated in the General & eRacing Technical Regulations.

This constitutes misconduct under Clauses 3.1 and 3.2 (a), (c) & (h) of the Disciplinary Rules for Cycle Sport.

Just what are “Clauses 3.1 and 3.2 (a), (c) & (h) of the Disciplinary Rules for Cycle Sport”? You can access the full British Cycling Handbook PDF here, and those clauses can be found on page 196-197. They’re worded in a fairly vague, broad fashion though. For instance, clause 3.1 states:

For the purposes of these Disciplinary Rules, ‘Misconduct’ means any conduct that is unsporting and/or has the potential to bring the sport of cycling, other Participants, Race Officials or British Cycling into disrepute.

What Did Cam Do Wrong?

Cam used an ANT+ simulator to move his avatar around Zwift, accumulating the elevation required to unlock the Tron bike for his account.

He then used that Tron bike in the British Cycling Zwift eRacing Championships.

Here’s a video Cam posted today in which he explains how the Tron bike thing happened, and his thoughts on the whole matter:

What Is the Punishment?

As far as I know, this is the first time a fine has been given in relation to a Zwift race. Also the first Zwift-related suspension from a cycling governing body that I know of.

It’s worth noting that Cam didn’t win the race by “doping”–that is, having intentionally inaccurate power numbers, weight, or height in the system. His power numbers were real, but he got in trouble because he didn’t earn his Tron bike by actually doing the climbing required to get it.

The bitter irony is that Cam probably did enough elevation on Zwift before the big race to unlock the Tron bike, if he had taken the “legal” approach. He had the time to do it, at least.

But racing on virtual equipment obtained via simulated efforts can’t be allowed since it goes against Zwift’s own terms of use (and really, the spirit of competition).

Was the sanction too heavy-handed? Perhaps. The DQ I understand. The fine? Sure. A 6-month ban from BC racing? It seems a bit much to me, but then again, there’s a reason I don’t make these rulings.

I like Cam’s video response–he explains the full situation, seems genuinely sorry about what he did, and points out some issues with the process which British Cycling may need to address. When was the last time you saw a cyclist be this candid after being sanctioned? So kudos to Cam for that.

Cam is looking to move forward from all of this. I asked what his Zwift racing plans were in the upcoming season, and he said

Of course I’ll be taking part in races! With my WahooEsportTeam mates.

I love Zwift racing, and I wouldn’t want something like this stop me from racing.

Good for you, Cam. See you out there!

Want to read more on this topic? Check out DC Rainmaker’s thorough piece.

Missed the big race? Watch it below. The women’s race is first, and the men’s race begins around the 1:18 mark.

What do you think of this situation? Share your thoughts below!

I don’t quite understand how much of a benefit this Tron bike gave Cam but I think it was right to take away his title and give him the fine. I think the suspension is a little steep. As long as they are consistent with future suspensions then I guess it’s fair and will serve as a good deterrent. I feel bad for Cam and I hope he overcomes this and gets the next title. Kudos for him to make his video. Apology accepted.