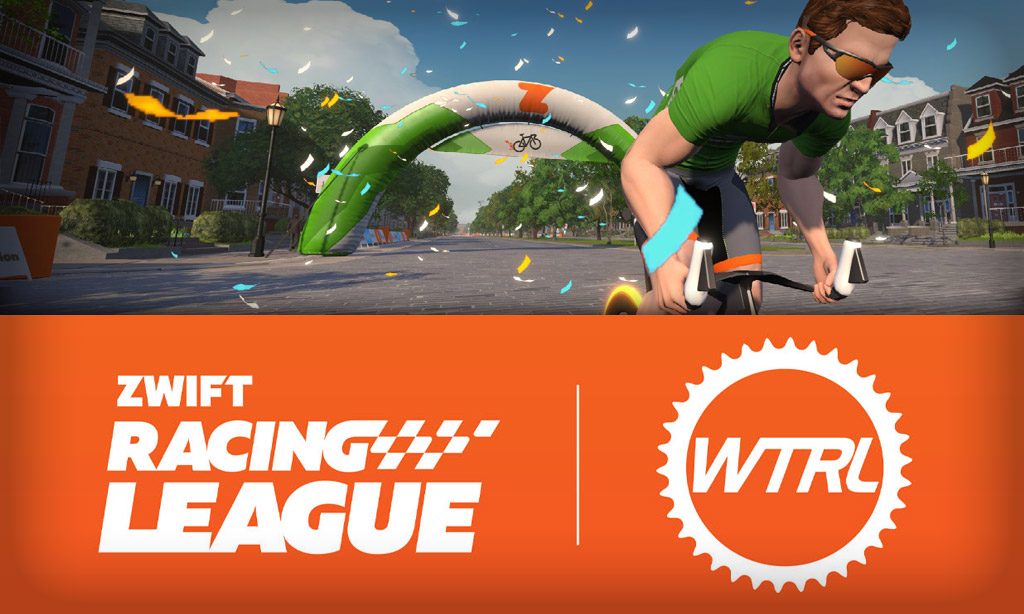 We’re getting close to the end of Zwift Racing League Season 2, with just 2 “regular” races left! This week we’re on Richmond’s Libby Hill After Party route – a sprinter’s delight, but the puncheurs may have the last laugh atop Libby Hill.

When Season 2 began, races 7 and 8 were marked as “Playoffs”. But this is no longer the case.

Instead, WTRL has just announced that additional playoff races will be held between the top 2 teams in each Division 1 on March 5th and 6th between 7-8pm UTC. (Lower divisions will simply have teams promoted and relegated based on ranking after race 8.)

Looking At the Route: Richmond’s Libby Hill After Party

Here’s the course preview video from Rick at No Breakaways:

This route is basically 5 laps of the very flat Fan Flats circuit, followed by some flats and descents, with a finish atop the Libby Hill climb. It breaks down like this:

Out of 32.9km of racing, the first 32.2km are quite flat, or downhill. Sprinters, rejoice!

Read all about the Libby Hill After Party route >

This route is obviously very aero-focused, with only 60-90s of all-out climbing at the very end. Don’t go with a climbing setup.

Our tests show that the Tron bike is just 1s faster up Libby than the S-Works Venge with disc wheels – but, the Venge is a bit faster on the flats. Either of these superfast rigs will do the job quite nicely.

Otherwise, go with the fastest you’ve got based on our “Fastest Bike Frames and Wheels at Each Zwift Level” list.

Five times through the sprint banner means riders will have five chances for both first-across-line and fastest-through-segment points (10 riders deep). The Libby Hill banner is also awarding FAL and FTS points.

The first 32.3km of the 32.9km route are quite flat, or downhill. So this will be a fun route for the sprinters. But the Libby Hill finish makes things interesting, as it won’t be the pure sprinters who shine. Instead, the win will probably go to riders with very high 60-90 second watts per kilo… unless teams can execute more advanced breakaway strategies.

On that note: there are definitely some opportunities here for teammates to work together to get away for a long attack that earns first-across-line extra points. Will anyone be brave (and strong) enough to do it?

Expect early attacks on each sprint attempt, as well as heading into Libby Hill. Chances are the early attacks on the sprint will occur in later laps, as the overall pack speed drops a bit. The question will be whether to chase down/follow an attack, or let it go and hope the blob swallows them before the line.

Lastly, powerups: there will be seven opportunities for a powerup on this route, and powerups given will be an even mix of the Helmet and Van. Both powerups are quite useful in a sprint, but the Helmet is most desired for those chasing sprint points, while the van is a big help if you need recovery on flat roads sitting in the pack. Make sure you know how each powerup works, and use them wisely!

Google is your friend, as always 🙂

I don’t understand the point of promotions and relegations in the lower categories. If a C-Team with true C-Riders get’s promoted, won’t they get absolutely destroyed next season? And the demoted B-Team with true B-Riders, shouldn’t they get disqualified every time because they are too strong for cat C?

Am i missing something here?

You are promoted or relegated by 1 division within the category you are in. For example last season we finished in the top 2 of B4 so we promoted to B3.

Ah, that was the missing part 😀 Thank you!

In some leagues like Am West, there is only one C divison. Like it happened to us, we were good in Season 1 and several members upgraded. As a result, we had to race Am West B3 in Season 2 (automatically placed there by WTRL). And consequently, we’re getting thrashed left and right.

Unfortunately there is nowhere for the to teams in division 1 of B, C and D to go (unless they upgraded to the cat above). They just remain at the top thrashing everyone forever (much to their dismay, no doubt!)

True for season 1, but WTRL told me for season 2 the top 2 teams in Division 1 will go up to the next category.

Oh, well that is some interesting news! Is there anything to stop them just making a new team in the original category, though?

I’m guessing that also means a team of A rider’s is relegated down…?

The assumption is that the teams below the get stronger over time. BTW, what happened to your article on here?

Yes, I think that’s the aim, but with the current cat system some riders power profiles mean they stay within a cat much longer than others who are bumped up (thinking of those with comparatively strong 1-5 min power as compared to 20min power). We have certainly lost a few riders up to cat A who were still being beaten pretty comprehensibly by riders who have remained in B.

My article was taken down due Zwift having come data-privacy/GDPR concerns.

Yeah, i’m not a fan of Zwift’s racing Cat system. It encourages sandbaggers. In my case, I barely went over in 20 min power recently and was upgraded to B (note: I don’t pay attention to being upgraded and go all out in my races, which is probably rare). I was not competitive in C lately, rarely getting top 15 in any race. Now I’ll be battling for last place in B, where almost nobody between 3.2 to 3.5 even bothers to race since they have no chance. I tried the Endurance Series yesterday in B. Almost the entire field… Read more »

While I recognize an upgrade is demoralizing from a race results perspective, there are a lot of other rewarding perspectives that I have focused on being in a similar situation: Achieving new personal bests in power categories in Zwift Power b/c I am being pushed by stronger competition. Racing against whatever group I find myself in after splits. Whether it’s for 40th or 1st…it’s still a race. Seeing how much my FTP has increased since upgrading. Knowing that I am getting stronger and faster and with continued work will one day get back to competing for the podium in video… Read more »

I can understand your frustration, my 20 min power is around 4.0 w/kg, albeit a very light rider at around 60kg, and I am generally fighting for a position in the top 20%. For me now it is about maintaining my race ranking and performance stats. Luckily as I’m rapidly approaching 60 I do have veterans races.

Noticed lots of feather power-ups in the early races today. Did someone make a mistake in configuring the race?