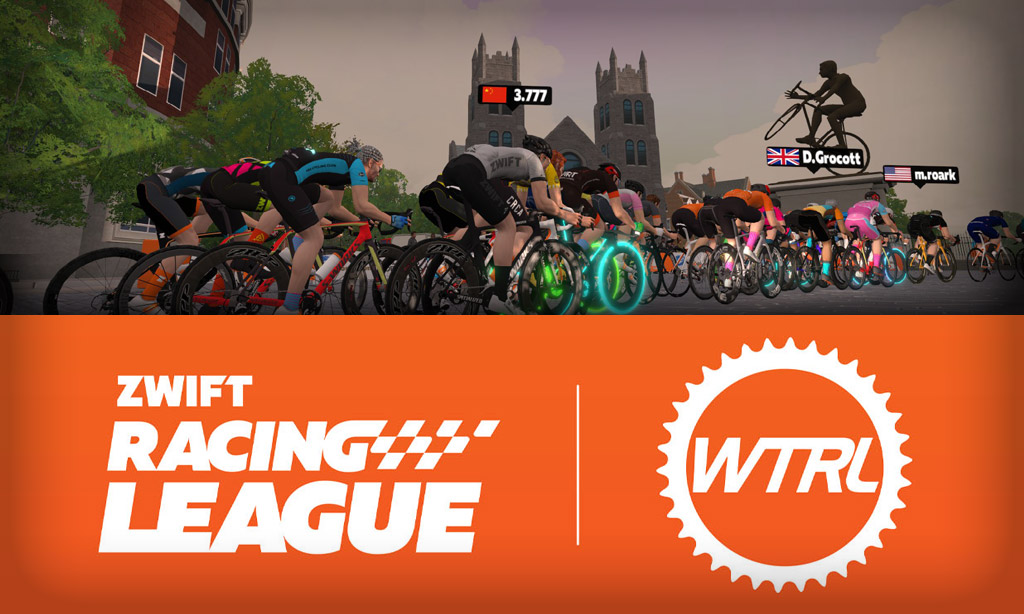 The first week of Zwift Racing League Season 2 is upon us, and it’s going to be a slugfest right out of the gate on the Richmond UCI Reverse route! Let’s dig into the course, including some tips for bike choice and key selection areas.

We begin with a descent of Governor Street, followed by a climb up Broad Street to the 23rd St KOM banner. With an average gradient of 3.5% over 1.1km, this climb will see powerups flying as it defines the first selection of the race. Speeds will be high enough for the draft effect to be substantial, so sit in the wheels unless you’re chasing those first-across-the-line points.

Riders chasing the “fastest-through” points will also be hitting this segment hard, but would be well-advised to use the group’s draft to boost their speed.

Keep pushing over the crest, descending the 23rd Street cobbles quickly. Then try to keep your momentum up as you hit the quick kicker on 25th-Franklin Street. This is a timed KOM, but with no points attached for ZRL it may be a bit calmer than the 23rd St KOM. Be ready to go hard, though: the first part section is the steepest bit of the course, topping out at 22% as you turn the corner onto Franklin Street!

Then it’s a twisty descent of Libby Hill followed by a bit of flat before we hit the third and final climb of the route: E Main Street. This is the longest climb of the circuit (1.2km), but isn’t terribly steep (3.8%), so settle in, use the draft, and keep your effort steady. This climb has no intermediate points attached.

Once the road flattens out it takes a sharp right, then a sharp left. Just after the sharp left is the start of Zwift’s shortest sprint ever, the Broad Street Reverse! This one is worth first-across-the-line points, but to get them you’ll have to power up well before the left turn.

Now we’re on the flat second half of this route, which includes another sprint (Monument Avenue Reverse) with intermediate points both for first-across-the-line and fastest-through.

After the sprint we settle in for a flat effort to the start/finish banner. That’s one lap down. One more to go!

On a course like this we recommend making your frame and wheel selection based on gaining an advantage for the most important sections of the course. On Richmond UCI Reverse, the big selections will take place on the three climbs on the front half of the circuit. So you want a bike setup that will get you up those climbs as quickly as possible (lightweight), while still being very aero for the crucial descents and flat back half of the route.

The Tron bike is your clear first choice based on our speed tests. It turns in the same overall route time as the fastest combination in game (Specialized Venge S-Works with Zipp 858/Super9 wheel) but climbs just a bit faster.

In lieu of the Tron, we would recommend getting the most aero bike available based on our “Fastest Bike Frames and Wheels by Level” post. Yes, the disc wheels will be a big heavy on the climbs… but those climbs will be raced at high speeds, and the disc wheel’s speed advantage should trump any weight disadvantages.

This race is full of strategic options thanks to the course layout and WTRL’s points structure.

Intermediate points are available at these locations on Richmond UCI Reverse:

Additionally, each arch will distribute an equal number of the following powerups: Helmet, Van, Feather. Riders will receive 9 different powerups over the course of their race, since there are 5 arches per lap: 23rd St KOM, KOM Reverse, Broad St Reverse Sprint, Monument Ave Reverse Sprint, and Start/Finish banner. Make sure you know how each powerup works, and use them wisely!

Riders with high 1-2 minute w/kg will surely be pushing up the initial climb to create a selection in order to protect sprint intermediates from the larger, more high-wattage sprinters. The same can be expected on the second and third climbs.

Any sprinters strong enough to stay in the front group should be able to rack up some intermediate first-across-the-line sprint points on the second half of the circuit. And with the introduction of fastest-through intermediates, even sprinters who are dropped will be able to earn extra points if they can put in a fast sprint!

Reminder: for Season 2, extra finishing position points are being awarded all the way down to 83rd place, which means nearly every rider will be receiving extra points based on their finishing position. Sitting up and coasting in is simply not an option in ZRL Season 2!

Since finish position matters for all riders, expect to see chase groups pulling back the climbers on the back half of the circuit. If you’re a strong sprinter who gets dropped on the climbs, finding others to work with to catch groups ahead is a smart move, as you’ll be able to outsprint those climbers at the intermediates and the finish line.

So, basically: use Tron if you have it, otherwise the other fastest bike based on your level.

The updated rules are such an improvement compare to season 1 especially the point system. As you already mentioned at the end. Everyone can work with the next group to catch the riders in front. Nice carrot for everyone. That will be hard racing all the way to the last position. Just one more thing to add. Keep drinking from your bottle as much has you can during the races. You will need every ounce of fluid. Drink, breath, peddle repeat!

Don’t forget to fart too, too dangerous to hold it in for the whole race 😂

Where do you find the complete course grade data to identify max grade = 22%?

Tell you what, if they don’t get the ZP fit file processing fixed in the next few days (it’s over three weeks now), the racing league is going to have some serious bumps, especially in B and C divisions.

Should be fixed now.

Do you know if First-Across-the-Line Intermediates points are available for each of the 3 Kom / Sprint each lap? or just once each across the race for the three of them?

Also the same questions for the two fastest through intermediates.

The course list on WTRL gives the answer.
For Richmond it is:

Can anyone help me with the following?
Am always struggling finding where the different segments begin so it’s a guessing game everytime. Where can you see in game when you’re at the start of a segment ?

KOM starts are marked by a red dashed line on the road + a road sign very low to the ground in the shape of a red forward slash. See link below. Sprint starts are the same as KOMs except they’re bright green. Link example:

Are we guaranteed a power up? or could it come back as ‘blank’ after crossing an arch?

Kind of takes the excitement out of the series when you cannot get timely results from the race organizers. Surely they can have someone experienced in writing scripts to analyze the results in a matter of minutes, highlighting individuals that may need a manual inspection.