While many were riding outdoors in the northern hemisphere this past summer Zwift ran a wildly successful eCrit race series in Australia where ten racers from around the continent were selected to race in a live finale. It was a quality event and rightly they sought to reproduce the format for the northern winter. At present we are at what would have been 4 stages into a 6 stage race until yesterday when it was announced that the whole series was getting a reboot as a 10 race series.

To say there was some disappointment would be understating it. In fairness some people who missed the start of the series, which began a little early for some or had sickness or travel commitments, will benefit from the new plan. Current racers can carry over 2 of their best race performances into the new series where the best 7 of 10 stages will be counted to select a group of racers for a live final event.

The official explanation from Zwift is that they want a quality set of finalists. Their explanation in brief:

We’ve made a call at Zwift HQ to re-boot the EU and NA Crit Series in association with Zwift Power and KISS. Results from the previous series will count towards the new one. A tough call which will frustrate many.

I’ll be frank in saying I disagree with their decision but like many I’m not privy to all the information and give Zwift the benefit of the doubt here. It sounds like they were trying to remedy one type of problem but didn’t anticipate how much frustration might be caused by moving the goal post after the fact. I’m not alone saying that participating the past four weeks has involved careful negotiation with family obligations that can’t easily be extended by 2.5 months. The short race series was in some ways a feature, not a bug.

Lest this sound all negative there are some good aspects about the event that shouldn’t be lost in the controversy:

Because of some server issues during a couple of the race events some people were upset that they missed a chance to rack up points. Zwift extended the series from 5 to 6 races, but at this point it may have made sense to change the format to select the best 5 out of 6 scores. In fairness the new format of the best 7 out of 10 is likely a better format, but the sudden change simply didn’t go over well.

In the end the eCrit series will still be an excellent event. Top talent will emerge and, like before, some perfectly qualified individuals won’t make the cut due to luck or schedule conflicts. In the end it should be a positive experience. Ideally next year the rules of engagement will be more stable for all concerned. 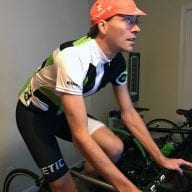 Duane is the ride leader for the Kinetic Group Ride and has been a member of Zwift since early beta.