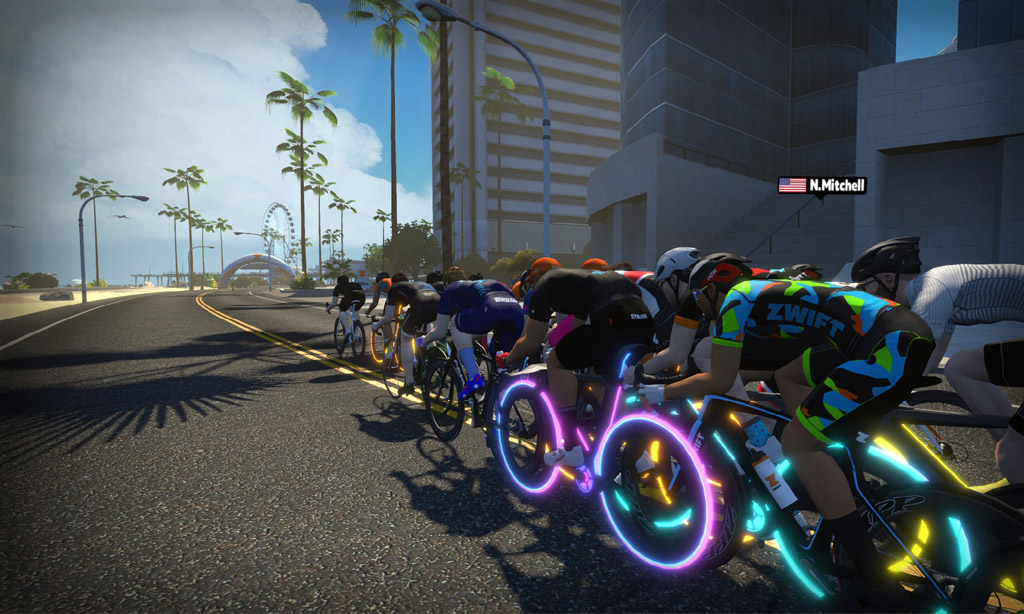 If you can’t ride (or even if you can ride, but want more action), don’t forget to tune in to the live TV show on Zwift Community Live’s YouTube Channel at 6:15 (UK time).

Before we look at next week let’s review this week’s performance on Sand and Sequoias. As always my goal is to predict the time a team needs to make PL next week. The trick for me is to get as close to 11th spot (top 11 teams per coffee class get an automatic invite to next week’s Platinum League) without going over.

Here’s how I did… it’s a mixed bag as usual. My virtual teams made it into Espresso, Frappe and Mocha, but Vienna and Latte well outperformed my expectations.

How did I do today in Latte? We knocked over a minute off our time from July… and my legs are still feeling it. The KOM really hurt us, and we lost a couple of riders the first time around, and another on the last lap – but everyone gave 100% (technically Strava says I gave 96% intensity, but Training Peaks gave me an all-time 60m power), and who can ask for more than that. Both laps in an identical time – giving us 1:06:36 around the course. That’s enough to position us close to the top 40% of Latte which I’m really happy with.

It was great to see my old team CICC back out there… like all good Frenchmen (fighting talk… they’re mostly British expats) they took an entire summer off, but they are back and fired up.

We are staying in Watopia once more this week, with four laps of Watopia Flat Route. This route is OLD… pre-dates my existence on Zwift, coming along in December 2015 (I didn’t find Zwift until autumn of 2017). I was amazed to find that Watopia Flat hasn’t appeared on the TTT calendar before, so we are all learning as we go. While it hasn’t appeared on the TTT, this is a popular race route on Zwift, and I am sure you have all ridden it a few times. We are lucky that ZwiftHQ has written a race recon. The race recon profiles focus on scratch race dynamics, not TTT, but it is a good read regardless.

Thanks to the early birds reading this who spotted that the race length changed… its not four laps any more, its three. At a touch over 10km each make this a 30 km race. Each lap is pretty flat (the clue is in the name), and all-told we have around 160M of vertical climb. Like Volcano Flat a couple of weeks ago – this is all about formation and communication. It’ll take between 40 minutes for a top-flight Espresso team to an hour for a short-handed Mocha. I reckon my mid-pack Latte lads will be in and out in 50 minutes.

There are two tricky areas on the route – the ramp out of tunnels through the dirt and up the false flat is the first, and the hill through the Esses is the other. Keep communication clean and keep an eye on your team mates and you will sail through.

From the Pens you head towards the undersea tunnels (Ocean Boulevard) through the fishing village and up the winding false flat. Down the other side into the Italian Villas towards the sprint (don’t be tempted) and up the hill that precedes the Esses… up and down the Esses, and down the hill to the start/finish. My fastest time through here was the Team INEOS group ride in the spring, where I averaged 40kph.

Bike recommendation on this route is pretty straightforward. Aero rules the day. For me it’s Venge S-Works and Super9 disc over Tron.

As I mentioned last week, the new Canyon Aeroad totally changed things for anyone between levels 23-33. I don’t think there’s a lot in it between the Aeroad 2021 and the Tron even. Here are my recommendations at different levels.

If you have the Tron and are level 23+ it’s a toss up… the Aeroad with the DTSwiss hoops are compelling… but I think the Tron wins by a hair. That said…  I cannot stress highly enough that if you are racing you need to be working on Tron. It’ll take a while, but just set the Everest Challenge and forget about it for nine months… like having a baby.

I said above this was a popular route… when writing this (Tuesday) there were 41 rides or races listed, many of which are 4-laps long just like the TTT (edit: the TTT is 3 laps now… but go the extra just for fun). Check for yourself on the event listing on zwifthacks.com.

Regardless of how the official race recon breaks the route up, I only see three sections…

Start to the end of the undersea tunnels

A flat 3.2 km from the start/finish gate to the start of the ramp. Around the same if you’re on lap 1 from the pens. You’ll pick up speed as you go into the tunnels. That is really all there is to say here.

This starts with the ramp out of the tunnels (300 meters at 3%), onto the dirt roads around the fishing village and up the false flat. The kicker at the end of the false flat will be barely noticeable at speed. It’s 3.6m in total from the the ramp to the Italian Villas.

Through the sprint and down through the sprint. Cross the bridge and into the only real climb of the loop – 300m at an average of 5%. This one will take some care if you are all on the rivet because your smaller, lighter riders will shoot ahead if they aren’t careful. After that it’s the Esses.

The Esses are a series of humps… if you’re coordinated you’ll accelerate on the downhill and let the momentum carry you up the next. If you’re not coordinated the momentum delta between heavier and lighter riders will split you apart!

After the Esses its downhill to downtown. Don’t forget to sprint on the last lap!

This race is all about team formation and setting a steady but aggressive pace. If you did well two weeks ago – do the same thing this week. If you didn’t do well around the Volcano Flat… think about why and do something different!

Was initially advertised as 4 laps but now showing as 3 on the WTRL website and companion app. Always enjoy the guides. Thanks for taking the time to put them out.

You’re not wrong Andrew. Thanks for pointing it out… No idea when that changed but Ill update the recce to reflect it!

May have been an accidental error when they put in the upcoming events as seem to remember they were having some issues at the time.

Well done on your return to the TTT last night 🙂

Good spot Andrew… Some time between me doing my recce and publishing it, the guys at WTRL Global HQ changed the length of the race… I will update as soon as I can!

Is the Tron or Level 45 configuration the better choice? Was not sure based on how the information was presented..

A great question… on this course its all flat. If you are level 45 you have the 858/Super 9 disc wheels and that gives the edge over Tron. If there were more hills the Aeroad or Tron creep up in value.

ooh good discussion… Yes – it’ll give you a bump on a flat course like this. My recommendations in the text err on the side of simplicity – but I love hearing about the setups everyone runs.

Dave have you written any tips on drafting etc in TTT on Zwift? One thing I can’t get my head around (having not tried it yet) is when you’ve had enough, how much do you back off to let the others pass, and how do you avoid getting spat out the back of a small group?

Great question. I have a decent set of instructions for my own team but haven’t published it. Eric wrote a performance analysis on running a pace-line here on ZI but that really just tells you to do it, not how to do it. Good news though – I am on the hook to write a recce for the first ZRL TTT and that race will have a bunch of teams who have never done a TTT – so I will write up a “how to” for that. TL;DR ahead of time… its about situational awareness (“own” who is ahead of… Read more »