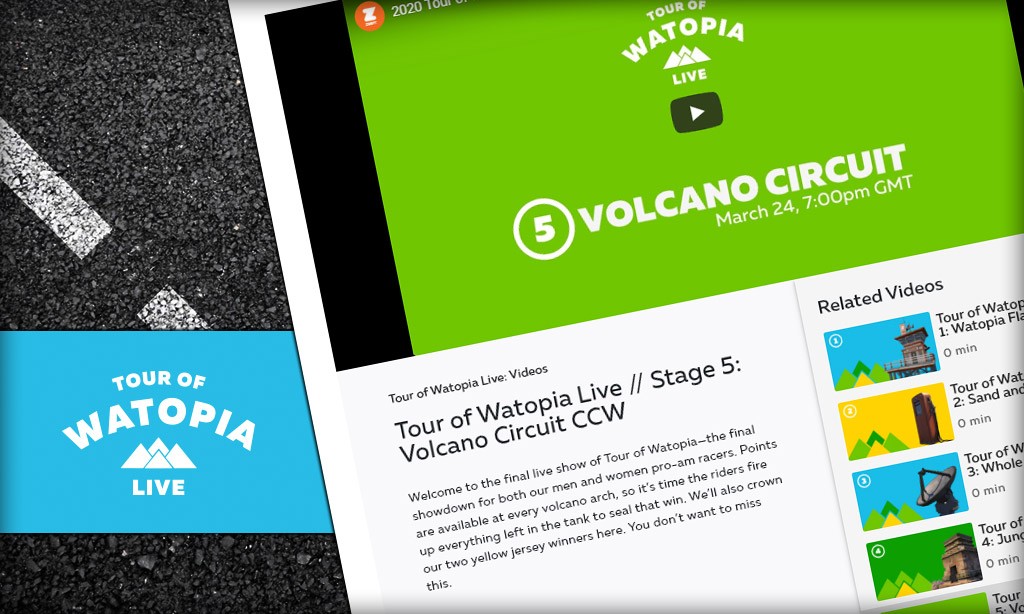 The night before each stage, get a preview of the stage to come as pro riders throw it down in a live race.

This sounds a lot like the Pro-Am Invitational Series Zwift organized for Tour de Zwift… except this ToW series includes overall series leaders jerseys (see below).

The ToW Pro-Am races will happen at 12pm PDT/7pm GMT the day before each new stage begins. Here’s the full 5-stage schedule:

These races will be scored based on a points system, with the top-scoring men’s and women’s riders being given a yellow leader’s jersey to wear for the next race. The points system isn’t new (Zwift used it for Tour de Zwift’s races) but this is the first time we can remember Zwift giving an overall leader’s jersey to the points leaders. Cool stuff!

Women and men will each have three races, with the final points leaders after the third race being crowned the overall yellow jersey winners.

Zwift has created a page where the live streams of each race will be available – see it at zwift.com/video/tour-de-zwift-live. Races will also be broadcast on Facebook via the Zwift Live.

We’ve also included each stream below, where it can be watched once Zwift goes live.

The people putting this races in place seem to know very little about the race dynamics. What’s the point of having 20 minute races, where basically it’s always a mass sprint between the best time trialists that can push 6w/kg for that duration?! It doesn’t leave any room for attacks or other race dynamics… In the Tour de Zwift in 4 races, 3 were won by the same guy, I think that explains my point… 😐

Well, it’s a points competition, with points for KOMs and sprints. And the Tour de Zwift races were a TEAM points competition, so to be the winning team it really was a strategic thing… wasting riders to get intermediate points, etc. For ToW, they appear to be doing an overall series individual points competition, which is interesting. Totally different strategy than TdZ. Also–I completely disagree that these are 20 minute TTs. If the race was a long hill climb, sure. But in most of the TdZ races you ended up with a sizeable pack sprinting it out in the end.… Read more »

I just can’t see people really wanting to watch Zwift races in vast numbers. I watch most live road cycling that is shown in the UK but the idea of watching people racing on Zwift seems daft.

Would be nice if zwift included rationale on how these teams are selected. Seems to me like another closed boys club of who gets in and who doesn’t.

Do they actually have results anywhere you can easily find them? Zwift’s website is a nightmare to try and get results for these Pro-Am events in the past

They posted Stage 1’s results to their blog: https://zwift.com/news/20977-tow-pro-am-race-results-stage-1-women

The way things are evolving, Zwift races might be the only sports to watch this year!

I am confused with how they are listing the Pro-Am stages/races. Why list them as stage 1 women’s race, then stage two men, stage 3 women, stage 4 men and stage 5 both? I was searching youtube for mens race stage 1 and discovered the naming “oddity”. Wouldn’t it make sense to have a stage 1,2,and3 mens AND 1,2,3 womens? The number skipping seems wrong.

I understand the confusion, @MarkM. But these races are previews of Tour Of Watopia stages—hence the stage numbers.