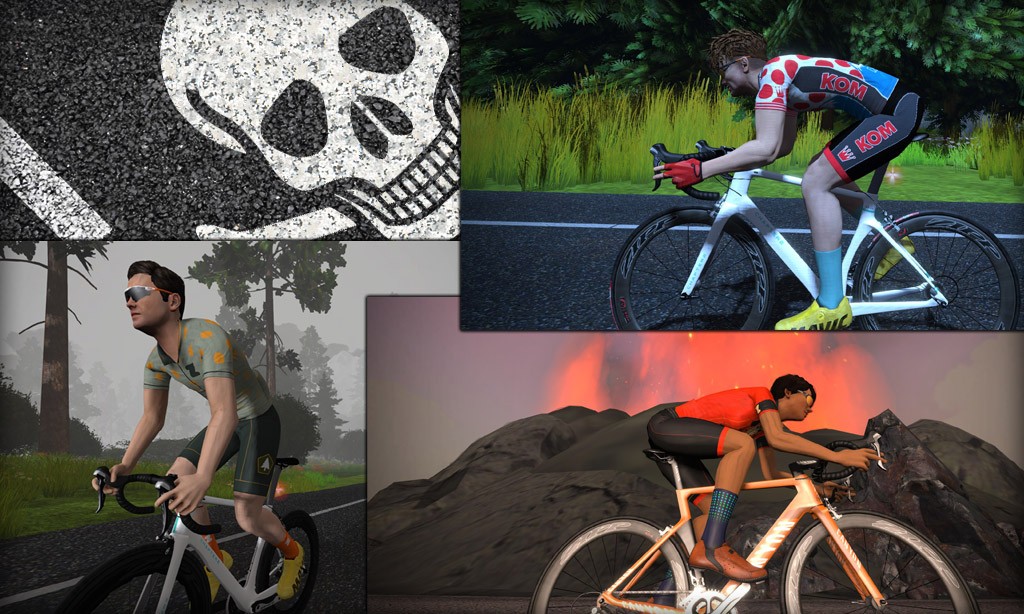 Our newest Rebel Route was suggested by Zwifter Gene Kruger, who rides a slightly modified version of this route. Gene named this “Three Little Sisters” in homage to Zwift’s official “Three Sisters” route which takes us over the Hilly, Volcano, and Epic KOMs.

Three Little Sisters, in contrast, takes us over the Hilly, Titans Grove, and Volcano KOMs – in that order. Each new climb is longer than the one before, and we took the shortest possible route to get from climb to climb.

Here’s an animation of this route:

The length and difficulty of this route make it perfect for a “1-hour challenge.” Who can complete this route in under an hour? Let’s see what you’ve got!

This medium-length route begins at the downtown Watopia start/finish banner. Pick the Hilly Route from the route picker and the game will start you out at the right place.

You’ll quickly hit the first climb of the ride – the very first timed KOM to exist on Watopia! The Hilly KOM is the steepest climb on today’s route, but also the shortest. Hit it hard to finish in a couple of minutes, or take it easy. The choice is yours!

After the first climb you’ll descend down through the statues and past Hank’s Gas Station, then turn left onto Ocean Boulevard. A right turn at Sequoia Circle takes us toward the Epic KOM, but don’t worry – we’re not tackling that climb today! Instead, we’ll turn left toward the desert and Titans Grove, then another left to get into the Grove.

Up the road a bit (just past the dinosaurs) is the start of our second KOM of the day. The Titans Grove KOM is really two sections of climbing with a small downhill in between. It’s not a steep climb, but it’s long enough to hurt if you’re trying to grab that KOM jersey!

Once you crest the Titans Grove KOM you’ll ride the rollercoaster roads down and out of Titans Grove then turn left to head back to Ocean Boulevard and downtown Watopia. Head through Watopia to the Volcano, riding around the mountain’s north side to the entrance of the Volcano KOM – our third and final climb of the day.

This is our longest climb. It’s not particularly steep, so use the draft of other riders for a little added advantage if you’re trying to make good time.

Finish the Volcano climb with a hard final kick, then circle around the top and descend back to sea level. Finish the Volcano Circuit CCW and head back to downtown Watopia where the route ends at the start/finish banner. Well done!

The KOM banners on this course come at the 2km, 15km, and 30km markers. Each climb is bigger than the one previous.

Here are the turns you’ll need to make to successfully complete Three Little Sisters. Start by choosing the Hilly Route.

Great route completed it today. 1:02:45 just missed it in under an hour, that was tough. As always thanks for posting this one, love the rebel routes!

Nice work! Now you’ve got a target to shoot for. 😀

I still haven’t made my hour attempt. It’s going to hurt for sure! I see a few riders have already achieved it though.

So I decided to try one of those Rebel Routes I keep seeing on Zwift Insider. The Three Little Sisters looked like it was one I’d enjoy. I started by selecting the Hilly Route and got ready to follow the instructions. I suspect my habit of starting out fast, just call me Thumper, wasn’t the best move. Made the turn for the KOM and attacked the climb. It hurt and I set a PR, great 1 climb down, relax, get the heart rate back down. Oh wait, the challenge is to break an hour, can’t relax too much, keep pushing.… Read more »

Do you really ride with no fan? I would die!

I really don’t use a fan, and yes it can get hot.

I absolutely love these rebel routes!!! This one is brilliant and would be awesome as an official course. Is it weird that I get excited when I see a new rebel route released…….

I love that you love them, @Catherine Allen! Keep up the good work.

Great route! Just did it today! It was just what I needed to get me on the bike this morning. Its great motivation whenever there is actually a “new” route on Strava these days!

Glad I could help.

It’s a nice route, but I will likely do a lap of Watopia Flat as a warmup before hitting the Watopia Wall and the rest of this route.

Beautiful route, thumbs up! But isn’t there something missing between step 13. and 14. where you should make a right turn to enter Volcano KOM? Seems like I missed it and made another circuit ccw.

Glad you liked it, Tobias!

I just checked – I think the turns are correct. Step 12 is the left turn to the KOM, then 13 is the left you take after going up the KOM and coming back down.

The “Start by Hilly Route” on this page points to Tempus Fugit!

I did this route today, and enjoyed it. However the turn by turn instructions could do with an update since the new roads have been released. After step 1 you’ll get 2 options to take the KOM bypass (which are easily ignored). The confusion for me started after that as the Titans Grove turns are now labelled as Islands. I missed this first time round, so competed a lap of Hilly Route and tried again. Took a bit of guess work, but by (I think) step 3 everything is the same.

I am planning this one shortly – so you think there are 2 ‘new’ turns where you DON’T take the KOM Bypass option, and that gets you back on track from turn 2 or 3 (the Sequoia Circle turns)??

I did this one today after one failed attempt! After Turn 1 there are two new ‘not KOM Bypass’ turns to take, I think they were both straight. Then I don’t think there was ever a Left to Sequoia Circle, I am pretty sure it was Islands instead, and then it picked up the route above from Turn 3.

Are the actual instructions very different from the old ones?

Thanks for the update-I completed “Three Little Sisters” on my second attempt with your directions!