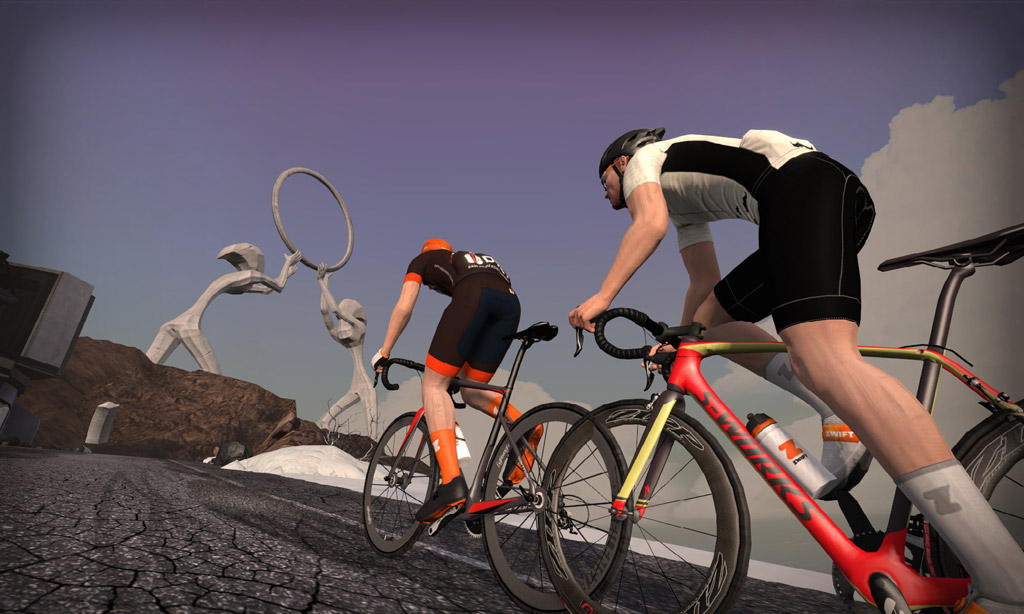 Zwift rolled out steering on all roads last month, and we’ve been having fun testing how this changes the game experience ever since. We’ve learned what it’s like to race with steering, and we’ve learned that taking the short line can trim some significant distance off of twisty climbs like Alpe du Zwift or Ventoux.

(By the way: the Elite Sterzo Smart is back in stock at Zwift’s shop. They ran out just a few days after steering was released, and just restocked with updated Sterzos over the weekend!)

But here’s a question we haven’t tried to answer yet: does the gradient of the road vary depending on your location in the lane? That is, might the gradient be steeper on one side of the lane than the other, particularly on steeper, tighter turns?

Anyone who has ridden outdoors knows that, on a twisty climb, taking the inside of the lane means you’ll cover a shorter distance but have to ride a steeper pitch compared to making the same turn on the outside of the lane. But does this apply in Zwift as well?

When a Zwifter first asked me this question, my initial thought was “Nah, certainly Zwift hasn’t created their roads with that level of detail.” But the more I thought about it, the more I thought “Actually… I bet it does work that way… because I’m not sure there’s any other way it could work!”

Because physically, if a road is angled at any sort of gradient, with the inside and outside lanes beginning and ending the turn at the same elevation, the shorter (inside) line has to be steeper than the outside line. There’s just no other way it could work!

We don’t notice this gradient differential on shallower turns, but sharp turns really bring out that contrast. Riding outdoors, we know that taking the outside of a turn lets us maintain a more even pace, as the gradient stays more steady. Taking the inside, on the other hand, means we’ll probably need to ratchet the power up – but if you’re attacking, that may be the perfect move!

So I did some steering tests on Watopia. Here’s a quick video of me riding on the good ol’ Hilly KOM, whose first turn is nice and sharp and steep. Check out gradient numbers for different lane locations:

Here are the gradients, from the perspective of riding up the Hilly KOM. Keep in mind Zwift rounds the gradient displayed to the nearest digit.

So there you have it. Taking the inside corner in order to shorten your big Zwift climbs does indeed cut distance off of the effort, but it will add steepness. So if you’re going to take the inside corner on a steep climb in order to go faster, keep in mind you’ll need to bump up your wattage as well. Just like riding outside.

Descending? That’s probably where this knowledge is most useful. Because taking the inside corner now means you’re shortening your line and hitting a steeper decline. Winning in two ways!

the sterzo is compatible with tacx neo?

The Sterzo talks to the device you’re running Zwift, not the trainer. So it’s compatible with all trainers as long as you have a front wheel (ie not Kickr Bike or Climb).

I’m running the Sterzo in combination with an old Neo1 and it works great. But.. I’ve noticed that it tends to twist and bend the Neo if you have it on a flor mat, placing the Neo on 4 pieces of plastic enables it to move slightly preventing bending forces on the Neo. I guess this might change from bike to bike due to geometri but at least that’s the experience on my setup.

Are you using the original Sterzo or the updated one? Received mine a few days ago and also use it on a Neo 1, on a training mat and have no issues with movement at all. Not sure if that’s to do with the geometry of the bike or whether it’s down to the revised edition of the Sterzo having slightly higher feet on the underside of the unit.

Selling now for close to half price at Amazon, actually

Not the smart version, just the old dumb version unfortunately.

I bought the sterzo a few hours ago but I did not receive the confirmation email with the ID. Do you know why it can be?

I did the Richmond Worlds route today and took the inside line on the cobbled climb section. I hit 34% gradient for about 2 metres. So I agree that steering does impact on gradient.

yikes!! that’s nuts! How many phone books did you need to throw under your kickr climb ﻿ 😂 ﻿

Interesting article! Thanks for the analysis! Physics for the win! quick question, slightly off topic but your article reminded me and after doing a bit of searching, I’m not finding the answer….only more questions 🙂 When riding in a bunch and going around a corner, sometimes my avatar shoots out wide while everyone else seems to stay tucked in. Is my inertia killing me? (physics sucks) Is this just what i’m seeing on my screen and different from reality? Is there a technique (more power in the corners) required? When I shoot outside, it I often will drop a few… Read more »

I’ve noticed the same thing with Pacer Bots, everyone else seems to move with the bot round the corner and I take the wide line

So I’d assume it’s even more important to get the inside line on the downhills…. tighter line AND extra gradient! Although as discussed previously the gradient on the way down only gives us half the benefit for the same difficulty setting!…. More steering enables races needed!! Cheers Eric as ever!!

Zwift only sends 1/2 of the descent gradient to your trainer, but your in-game speed is calculated based on the full gradient… so taking that inside corner should help a lot!

Anyone tried a Sterzo using apple tv with a smart trainer and an HRM. Is it possible?

Only possible using the Companion app for the pairing, instead of AppleTV, due to AppleTV’s device limitations.

See bottom of this page for a bit more info: https://support.zwift.com/en_us/steering-with-a-sterzo-smart-SyAN1Debv

What routes can you currently use the Strezo on?