More Adventures with the Sterzo: Steering vs Distance Up Mount Ventoux 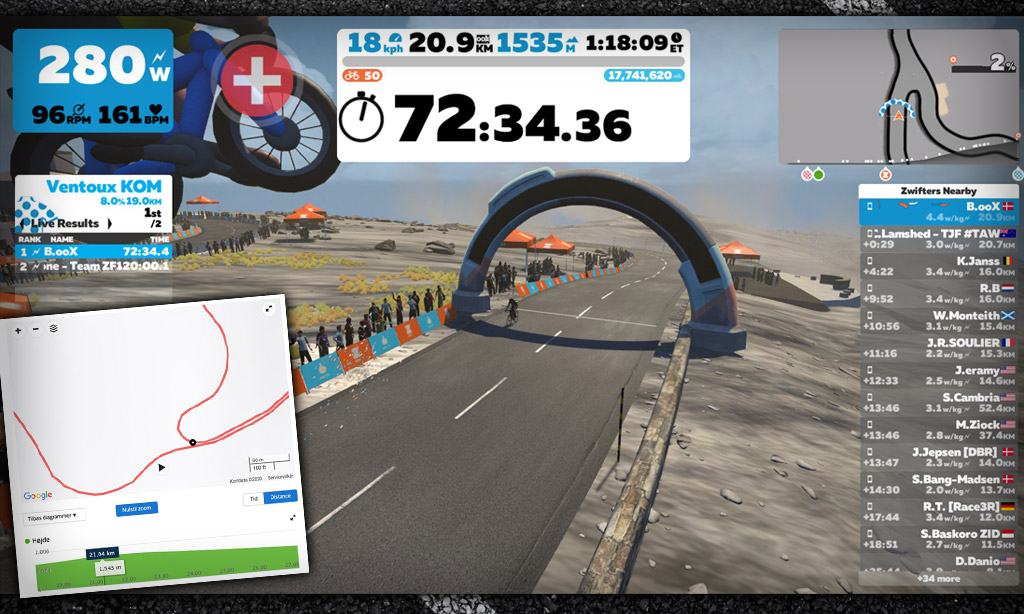 In my previous article about how steering with the Sterzo affected the ride distance up the Alpe, the first line was.: I hate you Zwift! (But I love you more…)

I’m not sure if it was a coincidence or Zwift trying to let me now they don’t like those kind of statements, but when I logged on for my next steering ride to get some data for this article, I was on a 25km trial! (Since Zwift always are friendly to me and they know I love them more than I hate them it was probably just the monthly returning issue with my iOS subscription payment not being transferred to my Windows setup automatically. But the timing was impeccable!)

So, what was the goal of this test ride?

Initially I had planned on a recovery ride around Watopia this Thursday. But when I saw that France was on the guest world menu I sort of convinced myself that a “recovery ride” up Mont Ventoux while trying to steer the optimal line would be a great idea… and selected Ven-Top as the route. I then hopped on the old Trek, with some friendly blue flashes from the Sterzo indicating that at least one of us was up for the job.

I have climbed Alpe du Zwift some 100 times (a 500th Anniversary Alp group ride is the goal within a year) and can recall all the corners in my sleep. Mont Ventoux is still new to me and the Zwift Companion App was a big help getting the correct position for the next corner coming up.

On the way up I discovered that there’s quite a few long turns on the route and was positive that the optimum line would make a difference.

At the top with 4km left of my 25km trial I noted that the optimal line saved approximately 200 meters over 20km!

With that new knowledge my brain was already working on this article but I still needed some data for the same ride, but steering for the worst line.

Of course I couldn’t deviate from my usual Friday BoOCD2000 ride so no testing Friday (but got the see the Alp) and Saturday is almost always a triple Alp for me. (This Saturday got slightly out of hand, something with 4424 meters that I hadn’t planned on but suddenly found myself in.)

Finally Sunday, and what else to do than another “recovery ride” on Ven-Top, this time steering for the worst line.

It was a great ride up this amazing new part of Zwift. Lots of great riders on the climb, and for some weird reason my legs felt great.

The distances from Garmin:

The conclusion must again be: yes steering in Zwift affects your distance. This time it’s +/- 200 meters over 20km. That’s a big number if you ask me, at least if you are trying to be the first crossing the line.

Again this is no scientific test, just me having fun – and maybe some pain. Go have fun and do your own test and Ride On!

(Ohhh… there might be a slight bonus here at the end. On my way down I decided to change my position from side to side constantly to see if the GPS data uploaded to Garmin from Zwift would represent this. Honestly, not in my wildest dreams I would have thought it would be visible on the map, but if you look at the screenshot from Garmin it seems like something is going on! That’s pretty awesome if that’s the case…) 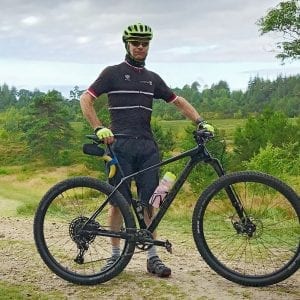 Referred to as BooX or Boo among friends, Bo is 45 year old from Denmark. He rides everything with two wheels: racer, MTB, flatbar, indoor/outdoor, and a vintage motorcycle from time to time. As a level 50 Zwifter he prefers free rides, hates workouts, and is addicted to the Alpe and Ventoux climbs.

200m of climbing is over 1 minute for a lot of riders so that makes a huge difference for sure. Thank you for testing it out!
I might have to order a Sterzo before trying for the sub1h Ventoux..

On an unrelated note, is there a counter for how often you went up Alpe du Zwift? I’d like to know if I’m past 100 already 🙂

Alpe counter would be sweet!!!

Check your Strava. It will tell you how many times you did the Alpe du Zwift effort.

Brilliant! Why didn’t I think of that! Now I can know how many times I’ve gone up the Alpe. Sweet.

Unfortunately it’s not 200m of climbing less, it’s 200m distance. The climbing is always going to be the same. Less distance = slightly steeper, but a very negligible amount I’d say.

That’s correct — on an 8% grade you don’t save much. A 1% reduction in distance reduces rolling resistance, which for a 0.3% Crr, results in an effective grade reduction of 0.003%. That’s 1.3 seconds saved per hour up the climb.

If lanes are 3.7 meters wide, and you save the full lane width, then saving 2% of the distance implies 23.2 meters saved per 360 degrees of turning which implies 17.2 full turns or 68.8 90-degree turns per the 20 km climb, or a right angle turn every 290 meters. that seems optimistic (I should check my FIT file from when I did the climb).

I analyzed my FIT file and there are 18.9 full rotations worth of turns int he VenTop route, which would correspond to 440 meter difference between the best and worst case routes for a 3.7 meter lane width. So perhaps you weren’t perfect at steering or the actual difference in radius is more like 3.3 meters or there is some distance cost for crossing lanes (as in real life). In any case, nice work and I’m surprised it came out so close to “theory.”

Hi Dan Absolutely awesome with some mathematic theory to sort of support my test 👍 I’m pretty sure that my steering wasn’t perfect. With Zwift steering on it’s own it’s sort of more “correcting” the line than steering which makes i hard to do it perfect. Also, there was a lot of other riders on the route that day sometimes blocking me. I guess a test with a 200 watt bot “pedaling” so you only has to steer would be interesting, then you would be able to focus 100% on steering and even compare times 🤔 But again running 3… Read more »

There is only one more question left to answer! If you cut corners on the flat it will affect the distance you ride which is obvious. However, if you cut corners on the way up climbing a steep hill you should normally get a higher gradient (you have to push more wattage) for that short cut. Just to keep it fair. Don’t you think?

This has been tested and verified. Inside lines have higher gradients. Search YouTube – but yah, it’s good news that Zwift has covered this base.

The real question then is which is faster? The shorter, steeper inside line or the longer, flatter outside line.

I want steering enabled on the NEO BIKE ﻿😡﻿ I want that feature !!!!

I just want the Neo Bike, it’s not available here in Denmark 😳🙂

It makes me wonder, if you zigzagged as aggressively as possible on the descent, could you materially increase distance and as such XP with no incremental watts? Could I get a free km just by swinging my handlebars back and forth while coasting down the hill?

Hi Craig. It was as aggressively as possible. Theoretically you will gain some distance by doing so, but I’m pretty sure you will prefer to ride a few kilometers longer over slamming you handlebar from side to side all the way down – at least I would 😉🙂

Awesome follow up piece to your Alpe Du Zwift steering vs. distance test. More data + more fun (pain😁) = more discoveries. Nice work(!) as it demonstrates line choice does effect the distance👏👍 and even nicer 🤗that you shared this advantageous finding with us addicted (some OCD) orange world people.

Fascinating “bonus” info! Onto the next curious adventures of Boo. Sweet climbing time no matter what line you are climbing.

Hi Kris 🙂
Thanks for the always nice comments 🙏 It highly motivates me to write more stuff.
I might have a “few” more articles “cooking” in that weird back of my head 😉