Steering vs Distance: Testing the Sterzo On Alpe du Zwift

I hate you Zwift! (But I love you more…)

Like some other Zwifters I have a mild self-diagnosed OCD which among other things makes me get up at 4am every Friday for my BoOCD2000 ride which is my own route including the Radio Tower, Alpe, and a u-turn on the way down the Alpe to hit precisely 2000m.

And the reason I hate Zwift (well not really but…) is they choose to roll out a new (buggy) update almost every single Friday which isn’t really what you want to see early in the morning when trying to ride before work.

A few Fridays ago, the story repeated, and a new update was forced on my Win10 setup. Fortunately, I’m on a quick connection and decent hardware so when they roll out an update it downloads quickly. I got the update and started riding. Went on the forum while getting some heat in the legs, just to see how many bugs people already has discovered, and discovered that the new steering feature had dropped like a bomb.

First thought was “Nah… don’t really want steering, I’m here for the pain.” And a few hours later the order confirmation from the Zwift store hit my mailbox. 😊 (Of course… guessing that the Sterzo units probably would be sold out very quick I couldn’t resist ordering one, just in case I would change my mind about that pain thing.)

The package from Zwift arrived very fast (Tuesday) here in Denmark and installing the Sterzo on my old Neo trainer setup was a 5-minute job. The Stages SB20 next to it looked a little sad when it realized that it was “outrun” by a well-used Neo and an old Trek fitness FX bike.

The first test was quite impressive, and a few rides on the Repack Ridge MTB course was a lot of fun. Especially if you ignore that I got slightly seasick!

The next Friday after some outdoor riding and zwifting on the Stages bike I decided to jump on the Neo for my Friday BoOCD2000 and just activated the steering because I could. A few miles into the ride an idea popped up: why not try to steer on the optimal line up the Alpe?

So while trying to figure out if it was a great idea to climb 2000m fasted early in the morning I was also trying to estimate if actively steering for the optimum line would make any difference. But I didn’t really come to any conclusion, so I kept climbing.

At the top (well more like on the way down when trying to find some oxygen) comparing the photos from a non-steering BoOCD2000 ride with the active ride I realized that I actually rode 600 meters less during the 40km ride by actively keeping the optimum line!

Of course, my mind had to mess with me, so for the next Friday morning ride there wasn’t really anything to do but try riding the same route while taking the worst line and see what distance that would result in on the top.

For some weird reason Zwift didn’t have an update ready that morning and I just hopped on. The legs weren’t quite as enthusiastic as I was, but at the top, the distance ridden was 500 meters longer than the non-steering ride – making the difference between the optimum line and the worst line 1100 meters!

The distances stated above are from the photos included in this article. There might be a slight difference where they are shot, but Garmin connect shows the following distances to the same point at the top of the Alp which confirms everything:

For me, the surprising conclusion is that line choice does affect the distance ridden. Well done Zwift! 1100 meters less on a 40km ride is quite a lot if you are racing.

This isn’t a scientific test, just me having fun trying, so you might want to do a few tests of your own. It’s fun and you get to be on Zwift so why not? Ride on! 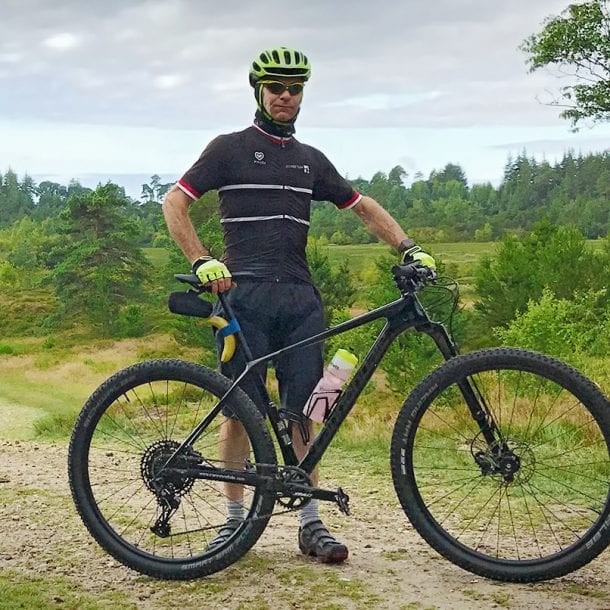 Bo Oxlundhttp://www.boox.dk
Referred to as BooX or Boo among friends, Bo is 46 year old from Denmark. He rides everything with two wheels: racer, MTB, flatbar, indoor/outdoor, and a vintage motorcycle from time to time. As a level 50 Zwifter he prefers free rides, hates workouts, and is addicted to the Alpe and Ventoux climbs.

This is a really interesting article. As a non-zwift user (but planning a set up for winter) I’m intrigued if there is a gradient change from the ‘worst’ to the ‘best’ line(inside to outside of corner) , as on a real mountain you might take the longer, less steep route round the outside of the bend. Does Zwift account for this?

Thanks for posting this. This is really interesting and positively surprising.

Unlike a flat TT, I wonder if taking the perfect climbing line is more sapping or takes longer as you are on the steepest albeit shortest route. Therefore a heavier rider could not spin as efficiently and gather as much speed or have mini-rests. Maybe it’s not enough to make any difference.

Climbing same amount of vertical meters but on steeper grades will actually be faster (take less time) at the same power.

Not in the real world. But I doubt Zwift is modeled that precisely.

Same question for me, does the line you take make a difference to the gradient?

yes- see above youtube link to a guy testing that

Based on the final screenshot, I think this should say 40.90 km

Wow! I wouldn’t have expected such a huge difference. Were you steering throughout the entire ride or just up the Alpe? I figure it was the entire ride, but that difference sounds enormous.

The “Bad Steering” distance should be 40.9 km, not 41.9, according to your screenshot. That would present a significant difference.

Hi Renzo. Please take a look at my reply to Oliver ﻿😊﻿

La Reine and Ven-top are much straighter routes with very few turns. Steering only saves distance when turning, so you wouldn’t see as much of a benefit.

Hi Daz Ellis. I might give the Ven Top a similar test at some point. Please notice the distance in this article also includes the Epic KOM and Radio TWR which makes it 3 times as long as the Zwift Ven-Top route, and probably also a higher percentage of turns vs. distance.

Useful information for a vEverest of the AdZ… I’m reading stuff to prepare a vE. First I want to buy a new bike and than a Sterzo Smart. Less kilometers and same altitudegain + gradients will be a nice thing ﻿😲﻿

A standard lane width is 3.7 meters. So assume a difference of 3 meters taking an inside versus outside line within a lane (need room for the width of the rider). You saved approximately 900 meters taking the inside versus the outside line. This suggests 300 radians of cornering. That is approximately 48 complete circles, or 1.2 circles per km traveled, or for example a right-angle turn every 210 meters. Of course switchbacks are closer to 2 right-angle turns. So it seems in the range of plausible.

Correction: 1100 meters (not 900 meters) saved. So that’s 370 radians total, or one right-angle turn every 175 meters. Of course it may be moving laterally more than 300 meters, as well, for example using the shoulder, or overlapping the center line.

Now all the race cheaters are definitely going to buy a Sterzo since we know they will do anything to win a race.

Except Steering is off automatically for all races (unless its a steering race or organisers allow it). It’s also hardly cheating, you can get a cleaner line, but you’ll pay for it by eating air…

Great article Bo! I’m new to Zwift (using a Peloton bike with speed/cadence sensors for now) and trying to decide on a full smart bike (like the Stages SB20) or get a used bike and attach to a smart trainer. Now that steering is an option, does that make many of these smart bikes a bit limited? I think I read the Stages bike has additional buttons that could possibly control steering, but not sure if/when that will be implemented. Do you prefer the Stages bike for Zwift, or do you prefer a real bike with a smart trainer so… Read more »

Thanks Jeff 🙂 Since steering is pretty low on my priority list I wouldn’t let it influence my choice of trainer bike that much – if at all… I can talk and write for ages about the pro and cons of the SB20 compared to my traditional setup, and I might do an article on it at some point. But the short version is.: If you like getting “in the zone” pushing constant high watts – especially on climbs – the experience on the SB20 is amazing and very smooth. If you are more into getting close to what you… Read more »

Thanks for the reply Bo, much appreciated. I’m leaning towards the SB20 since I like the idea of an all-in-one smart bike… now the big question is how do I tell my wife I want to sell the Peloton?!! ﻿😁﻿

This sends tingles straight down to my bike pedals Boo😉. Thank you for thinking outside the box and putting your thoughts🤔 to the ultimate test. Your mild OCD must have been on overload (which I can fully appreciate 😁) while you where analyzing the data. I look forward to testing this and having fun with it myself some day, but I will have to wait until my Kickr Bike buttons will be enabled to do so. Thank you for taking the time to share such a fun, interesting, and engaging topic.   I look forward to your future posts and perhaps… Read more »

Hi Kris 🙂 Thanks and glad you like it. As you probably already discovered I have been collecting data for some more writing. let’s see if something shows up ? 😉 Looking forward to meet you somewhere in that orange world 🙂

You can probably make a profit by cycling the perfect line but in a race you will miss the draft several times in the group which will lead to a loss I think.

Bo – any idea when Zwift will enable steering on the SB20?

Hi Dr. – No…, but I don’t really see it coming. It seems that Zwift don’t really care for the SB20 or anything that’s not their own product. I would also prioritize a OSD gear display for the SB20 way higher than “steering” with a couple of buttons that can’t be compared to the “real life” feel of the Sterzo. That being said… until Zwift comes up with something new my Sterzo is back in the box, it’s a fun gadget but after some rides I just wanted to go back focus on my power and the usual Zwift experience.… Read more »