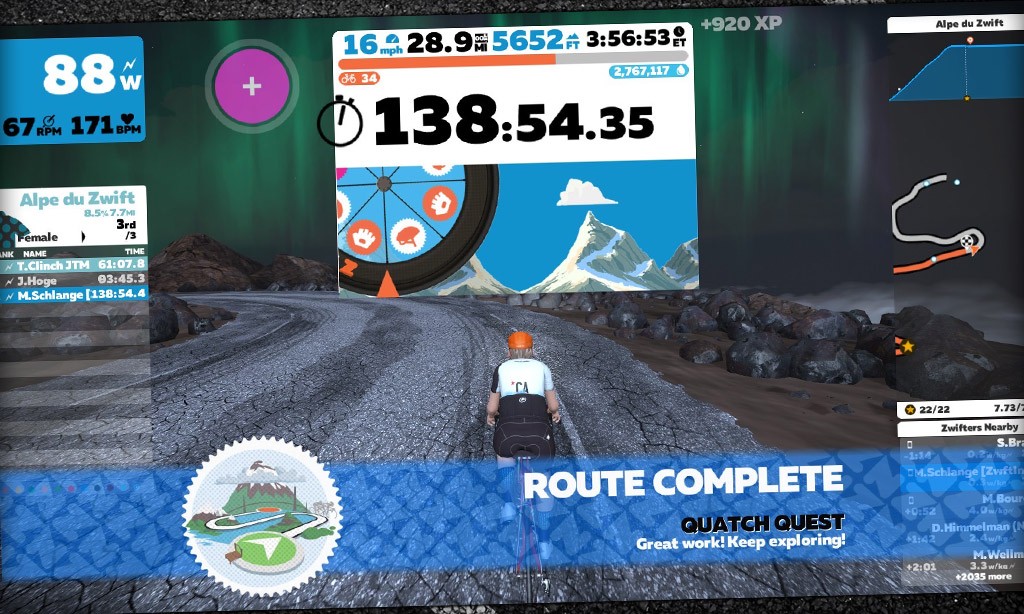 Editor’s note: Monica is undertaking the “Couch to Route Hero” challenge of riding all 67 “free-ridable” Zwift routes (and getting all the badges) in 11 weeks. Each week she shares her story of the previous week’s struggles and accomplishments, and some of the rides are epic enough that they deserve their own post.

Watopia’s “Quatch Quest” is one of those epic rides – only the second “5 Bidon route” Monica has ever tackled, and this one ends on the Alpe!  (Our Couch to Route Hero route rankings groups routes by the estimated number of bidons needed to complete.)

Follow along on her journey, take the challenge yourself, and be sure to give her a Ride On if you see her on course!

I went into Quatch Quest a little bit smarter than The Pretzel. Mainly, I didn’t have a time I had to be done by AND I had chamois cream! My only real goal for this ride was to not cry in the middle. “Aim for the stars, Monica!”

Quatch Quest has you head through Titans Grove first thing. The plan was to push myself somewhat, but save some for later. I tried to keep my heart rate in Zone 3 or a bit below.

I took a quick break after Titans Grove as I forgot to change my weight (I lost another 2 pounds!) and also wanted to give my feet a break. Next was another ascent up the Epic KOM. As I was going up a gal named Cathy and I found we were both doing Quatch Quest at the same time. She was up ahead and we chatted off and on the whole rest of the ride. We were both happy to know there was no “bonus climb” up the radio tower on this route!

After another break while my gal supertucked down the backside of the Epic KOM the route turned toward the jungle. Because I had to ride through most of it I switched to my Specialized Mountain Bike in game and sailed past people putting out more watts than I!

Next quick break was to stop before the Alpe to switch to my Tarmac Pro. The second-best part about the Alpe was I didn’t have to get to the top at any particular time – I could just mind my business and do what I needed to do. (But before you start thinking that I seem to be having a lovely time please note there were many mental choices required to push myself up to each new landmark.)

The very best part of this ride was having my new friend Cathy encourage me up the Alpe. She made it up long before me but never made me feel like that mattered. She’d ask where I was and how I was feeling. At one point I told her my feet were hurting pretty bad and my knees weren’t thrilled to be there either. She encouraged me to do two things which helped so much: take a break so my feet could rest as climbing is hard on our feet. And make sure my cadence is at my usual pace.

Because my cadence had dropped significantly she said I should ignore all the recent trainer difficulty discussions and lower mine so that I had more gears to use. She was right and it was good to have a second voice say what I was thinking I should do! I finished the climb at about 20% trainer difficulty and about 30 minutes slower than the last time I went up. But guess what – I finished it!

Because I climbed the entire Alpe I felt I earned the extra miles coasting back down. So I limped my way around the loop at the top (after getting another pair of gloves on the spinner) and descended. And wouldn’t you know it, during that whole ride of 4 hours and 12 minutes I didn’t cry once! (okay, I almost did, but feeling like crying and actually crying are two different things!)

Have you ridden Quatch Quest yet? Share your experience below!

Good for you changing that Trainer difficulty setting! Riding indoors is about 50% more difficult as outside anyway! Both physically as well as mentally!

Yeah, I’m not looking forward to this. But awesome job! Congrats!

If I can do it, you DEFINITELY can!

Good for you changing that Trainer Difficulty! Riding inside is 50% tougher than outside, physically and mentally!

High priority: find a bike (tri ?) shop which can fit you for shoe insoles. Bring your shoes to the shop. They will probably put the insoles in a microwave. You will be much happier after having these fitted. Look for a shop that makes a point of offering bike fittings and they should be able to do a good job of this. A primary job of the insole is to support the transverse arch of your foot. Without this support your feet will spread on a long ride and the pain can be excruciating. The difference, when well fitted,… Read more »

Thank you, KR. I did have my shoes fitted by a professional a couple years ago but it’s probably time to go back and get that done again! I appreciate the reminder!

Well done the 5 bidon rides are really challenging and they do have a way of inflicting pain but it won’t belong before you are finished. Just a little matter of 11 Box Hills and a couple more Alpe to go.

Oh man, I hope it’s as easy as you make it sound! Either way, I’m going to make this happen! Thanks for the encouragement! Ride on, Andy!

Well done Monica. I’m just glad the route badge worked for you. When I did it a few months ago, there was a bug and I didn’t get it. 😥
Due to “technical limitations”, Zwift couldn’t manually award it to me.

Got this after completing 3 sisters route also. Devestated lol

Sorry to hear, Kevin and Richie!!! I can’t imagine the frustration!

Congrats! This is really a hard route.
I have done it but I dong get the badge.
I ask zwift why and the answer was: “just ride it again, next time it will work”

There are often lead ins to the start of routes so you may need to ride slightly longer. Although the end of this is at the top of the Alpe so you should get the route badge there

Mercy! Supposedly whatever that bug was has been taken care of if you do ride it again, Chris. But sheesh, it would be nice if they could just manually give you the badge!

Congrats. I completed this route last Sunday. Man, did I underestimate the amount of nutrition I was going to need. Started out as a fasted ride. Ugh. I had to text my wife to bring me a tin of pop so I could get the sugar boost.

Heavens! Fasted? I would have died on the spot! Thankful for your wife! Ride on (with food! Haha!)!

Thanks for sharing, Scott! I like that we all can do similar things but in ways that work for us! Inspiring!

Well done! 1702m of climbing is fairly heavy going and most of it, the relentless climb, is right at the end and does me no favours. I think it was 70 minutes before I even got to the bottom of AdZ and after an hour I’m tired and numb bum etc, just about managed to hold around 225W up AdZ which really felt slow and tiring, 62:37, slow for me but to be expected, I was probably tired from smashing Lutscher in 55 mins about 36 hours earlier? I picked QQ because it looked easier than The Pretzel. Having compared… Read more »

2:10? WOWZA! If you can do Quatch Quest you can definitely do the Pretzel!

Thank you Monica for sharing your adventures I find your posts both educational and encouraging.

Awesome! Thanks, Jack! That spurs me on!

I did my first Quatch Quest last Sunday – which was my first time up the AdZ. I also rode down, then out thru the Jungle and down to the first underwater tunnel (get all the descent help I can). A total of 43 miles in 4:27. Just left the trainer in ERG mode all the time, and did the whole thing on my Specialized Shiv tri bike (not the best for climbing, but goes down like a rocket). My longest and hardest Zwift ride yet (started Zwift on 12/1/19, and just achieved Level 19)! Just to prove that momma… Read more »

Thank you for motivating me!
Today i tried the quatch quest and it was a complete success!
longest indoor ride with 3h
longest indoor distance with 61km
highest climb with 1725

and best of all: i completed the alpe the 5th time and got the Milensteins 🙂

ride on and may the force be with you for the full PRL!

Hi Monica, my other half and I are following your Route Quest and really enjoying it. We’re a few weeks behind as I know you’ve finished now. We started in March and I just rode Quatch Quest today… really hard ride!! I was so looking forward to getting this ride ticked off the list, but guess what!? Zwift crashed during the saving process and I have to ride it again on Friday.. Oh I was gutted.. 1700m of climbing that didn’t count towards my Tron bike too, oh well still loving Zwift, Zwift Insider and all your articles are fab… Read more »