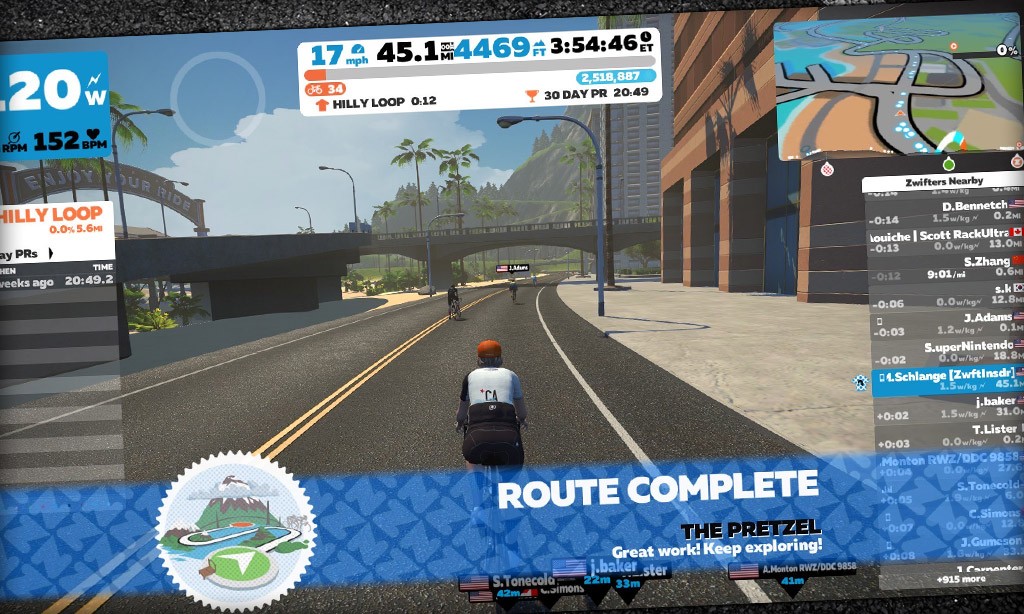 Editor’s note: Monica is undertaking the “Couch to Route Hero” challenge of riding all 67 “free-ridable” Zwift routes (and getting all the badges) in 11 weeks. Each week she shares her story of the previous week’s struggles and accomplishments, and some of the rides are epic enough that they deserve their own post.

Watopia’s “The Pretzel” is one of those epic rides – the first “5 Bidon route” Monica has ever tackled.  (Our Couch to Route Hero route rankings groups routes by the estimated number of bidons needed to complete.)

Follow along on her journey, take the challenge yourself, and be sure to give her a Ride On if you see her on course!

I scheduled this ride for a Sunday. We went to church, went out to lunch, then I zipped home early to start this, my first 5+ bidon route (based on the Couch to Route Hero ranking system). With 20+ people coming over in ~4 hours I needed to hop on the bike quickly so I could be done and showered before they arrived. I guessed that it would take me around 3 hours to ride the 45 miles with 4400’ of climb. Silly, silly Monica!

The Pretzel first takes you up the Epic KOM. No problem (except I am getting a little bored of it as of late). Next is the bonus climb we all love to hate. Managed that as well. Then there’s the meandering around the lower parts of Watopia. Rolling hills, looping back and forth. At the halfway mark I was right on track at 1.5 hours. Excellent! I was right about it only taking 3 hours!

At hour 2 my feet were burning and my toes were going numb. Because I had the extra time before company arrived I took a longer break than I normally would – 10 minutes of walking around without shoes, filling my bidons, talking myself out of a nap, taking a nature break, then wrestling my bibs back on.

I hopped back on my bike and started up the Epic KOM’s back side. I usually prefer this climb over the other side, but this was the first time I attempted it after already riding quite a while.

As I made my way up I realized this wasn’t going to end well. I started having trouble breathing (good old exercise-induced asthma was kicking in). Plus, I hadn’t been able to pull my bib shorts back on properly so the chamois was rubbing. And then suddenly a few of my toes felt like someone was stabbing a knife right into the bone!

Eric came upstairs to check on me and I was a mess! “I can’t! My toes. This is stupid. I hate everything.” He talked me into stopping mid-climb to adjust my shoe. I loosened the toe area, released the catch and felt so much better. Onward and upward!

As I continued up the climb I realized our company was coming over in 30 minutes and I was going sloooooow. That brought on all the tears. Crying and climbing and asthma aren’t a great combination. I wasn’t even close to done with my ride. I was disappointed in myself. The house wasn’t ready, the food wasn’t ready.

Eric assured me he would take care of the people, the house and the food and left me to carry on. After calming myself back down so I could breathe again I made it to the top of the climb. I was deeply relieved I didn’t have to go back up the bonus climb! I pressed on to the descent where I left my gal in her super tuck as I unclipped to relieve my little toes. Both feet were now in excruciating pain. Like someone was slowly trying to break my toes off. I took both shoes off and shook my feet out.

Eventually my gal had made it to the flat part in the castle and came to a stop. If I could just get her to the next descent she could continue to coast down! My fatigued brain decided it would be a great idea to hop back on my bike in my socks and pedal my way across the flat. Pedaling and dismounting a bike in socks off of clipless pedals doesn’t feel great!

My avatar finally descended the entire mountain as people started showing up at my house. I hopped back on my bike, WITH shoes on that were completely loose now and finished the last 5 miles of The Pretzel.

The entire thing took me just under 4 hours of ride time, with 13 minutes worth of breaks. After a quick shower and change I joined our friends and hoped no one would ask me about the ride. They didn’t. Later in the evening my face was tingly and my brain couldn’t keep full thoughts long enough to get them out of my mouth. I tried downing lots more water and food but I just couldn’t get enough. I slept well that night!

My initial reaction to the ride was “how will I ever do 5 more really big rides?” But now that it’s been a week I think it’s like having a baby: Delivery is terrible but eventually you forget and don’t mind doing it again.

Have you ridden The Pretzel yet? Share your experience below!

A great effort Monica, as the saying goes ‘the pain you feel today, will be the strength you feel tomorrow!’ Ride on!

Wow Monica! And you even did that epic KOM another two times last week in the bigger loop and the quatch quest, which also finishes up the Alpe! How you managed to get back on that bike after the pretzel is beyond me! Respect! I finished the last “easy” week of the schedule with 10 new badges. I really underestimated dust in the wind, which should definitely be in the 4 bidon list. It took me about 2 hours! Just as long as London’s Surrey Hills this week. Oh yes and I’m officially Unemployed! 14 days in a row! I… Read more »

Thanks for the encouragement, R R! The unemployed badge isn’t one I’ve gotten yet. Will need to work on that after this quest is over! Ride on!

Hi Monica, I joined this party a little late and have my own internal time schedule to complete all 67. I have decided that by March 31, I will have all of the routes completed, earned the TRON and the masochist (25 Alpe runs) badge. In the last 3 weeks or so I have devoted all of my bicycling time to doing mainly the routes and making two Alpe runs per week. As of today I have (4) 3 bidons to finish, (4) 4 bidons and (5) five bidons. Because of work and other commitments I have to do rides… Read more »

And you are late? I’m 3 weeks behind and my schedule runs until half April…
Great to hear you’re just as crazy as I am. 😉
I’ll be doing the rebel routes and Alpes after this 11 week effort. Just got the Unemployed badge!

You, Thomas, are insane! Haha! I like it! We’re hoping to schedule something for the last Saturday in March for anyone who still has to do the PRL Full. If you save that one until then we all could do it together (but at our own paces). See you out on the roads!

Cool! I am not looking forward to the PRL Full. The one and only century I did on Jan 1st was very painful. Might be incentive for me to complete this doing a group event instead of procrastinating all year. As of today, I have 8 route badges to go which includes the Mega and Uber Pretzels. Two more that will be on my procrastination “all year” list. LOL

I think having a group ride for the PRL Full at the end of this adventure is a fantastic idea!!!

What a great story about determination! We are all behind you, go go go !

Congratulations on completing both The Pretzel and Quatch Quest in one week. Sounds like you had some adversity but you persisted and then ultimately succeeded.

Good luck with your remaining ones.

Thanks, Brandon! It was a tough week, but also fulfilling!

How long did you take to ride the Jungle, de Alps course? About 3500′ elevation and 12 km I think? Tks

If you’re talking about Quatch Quest that took me 4 hours and 12 minutes. The write up is here: https://zwiftinsider.com/route-quest-quatch-quest/

Was going to ask where the 5 Bidon routes came from, as my copy of the route list doesn’t have those … but then I noticed that they are are shown as a separate section, there is just no “5 Bidon” heading on the side as there is with the other groups. You might want to check and correct that for anyone who hasn’t yet downloaded the PDF.

We actually didn’t call it anything since they aren’t all 5 bidon. Some are definitely more. But I’ll see if we can add something there so it’s less confusing. Thanks!

Big big achievement – a big round of Applause!!!! Fantastic that you continued, but as you said, pain goes away. I like “The Pretzel” cause I like climbin a bit more than sitting on my bones for long flat routes. Doing the Full PRL with Company is a great idea, maybe I can make it also, even if I am from Germany. Ride on!!!

Thanks for the encouragement, Oliver! We’re thinking that the best way to do the PRL Full where we all can do it somewhat together is to pick a day and everyone start when they can. That way, since you’re in Germany you don’t have to ride in the middle of the night to be able to ride with me (in California). And others from your timezone would be riding at the same time. Everyone’s rides would overlap as well… so someone else may be on the course and finishing their last hour while you’re on your third hour. Either way,… Read more »

Great story. I am also trying to do most of the routes but not sure I can ride the hours for the longest ones. I like knowing how long it took you to do a ride so I can gauge the time. I have all the 1 and 2 bison complete and about half the 3 so far. Never would have started this quest if I didn’t read your story!