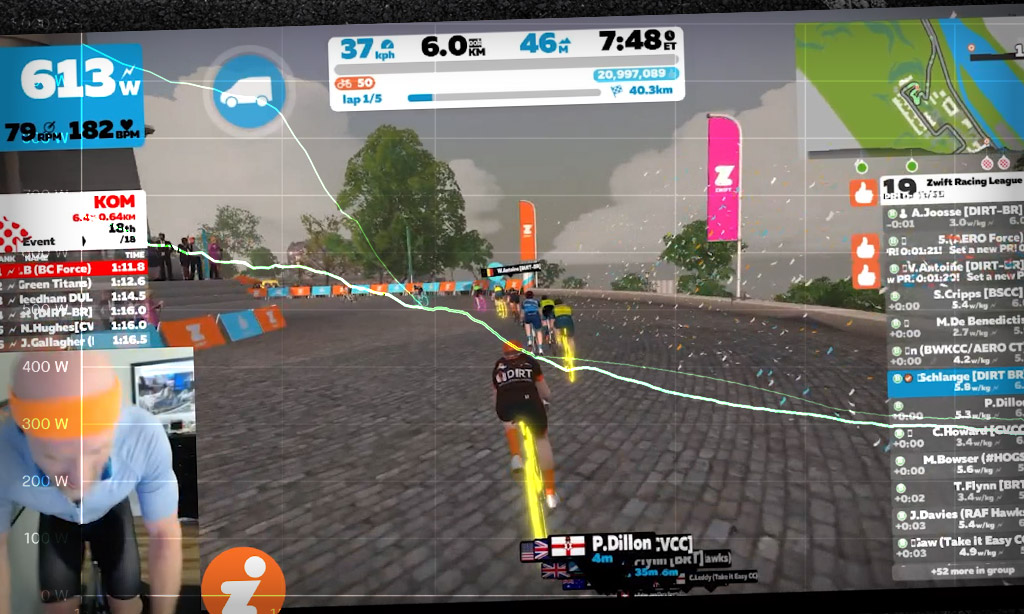 The 5th race of of Zwift Racing League season 3 was one I’d been dreading ever since I saw it on the schedule – FIVE LAPS of Richmond’s tough Cobbled Climbs route. What were those murderers at WTRL+Zwift thinking?

I’d been swapping between two DIRT B teams for this season, filling in as needed. My old Hellhounds team was racing in division 1, while the new team (Roosters) was in division 5. Both teams were firmly in first place, but the competition level in division 5 was a step down from division 1.

Happily, I was with my division 5 Roosters this week – so I thought I might just stand a chance of making the front group. Maybe. I rested my legs, steeled my mind, chewed some caffeine, applied PR lotion, warmed up thoroughly, then headed to the start pens. Let’s race!

Here’s an edit of my race video, where I highlight key moves and explain my team’s strategic thinking:

Everything stayed pretty low-key until we hit the start of the Libby Hill KOM. I didn’t have a great powerup – the van. So I used it early on, when speeds were still high, then I went all-in on the climb as the group strung out. Made it over the top in 20th, then used my drafting boost, a supertuck, and a 23rd street sprint to make up a few places.

My small chase group caught the front of the race at the bottom of the Governors Street climb. I was still in the front group, along with 4 other Roosters. Our rivals the Green Titans had 4 in the front group – so the game was on!

The second lap is where I made my big mistake. Everything was tame again in the front group on the flats and descent, but when we hit Libby Hill, it exploded – at a much higher level than I expected. (And of course, once again, I didn’t have a good powerup!)

Gaps opened up, and as we went over the top I lost the front group of 12, never to find them again.

But we were in a good position, with two Roosters in the front group, and a couple near me.

At the end of the second lap, we did some clicking around and discussing on our team Discord channel. My chase group had 2 Green Titans and 1 CVCC rider in it, along with myself and a teammate. The front group had only 1 Green Titan and 1 CVCC rider in it – so as we saw it, there was no reason for DIRT to work in the chase group, because we had the advantage in the front group. (Also, I didn’t have the legs to chase).

So we sat in. The one CVCC rider in our group stayed on the front quite a bit, and we just sat on his wheel for most of the next few laps.

Because of how WTRL’s scoring system works, 11-15th place gets the same points. And that was my chase group! So no matter if I sprinted it out and took first in my group, or sat up and took last, I’d get the same number of finish points.

The CVCC rider jumped hard on the final climb up Governors Street, and I let him go. He deserved it! I crossed the line in 12th, the third Rooster to finish.

See my activity on Strava >
See race results on ZwiftPower >

Those Libby Hill kicks were tough. I got a new bump on my 6-week power curve from this race, set on Libby Hill, lap 1:

One thing I noticed on this route is efforts were much more polarized – you were either resting, or going all-out. There wasn’t as much of the steady TT effort feel you get in flatter Zwift races.

I was kicking myself for getting gapped on the 2nd time up Libby. Could I have made the break? Maybe. Race hindsight is always optimistic though, isn’t it?

But the most important thing was that the Roosters won! In fact, our strongest rider Thomas broke away off the front and TTd to a solo victory. Him being off the front meant our other rider in the front group (Ally) could just sit in and conserve – giving him better legs for the final sprint, so he could finish 2nd.

All 6 of our riders finished in the top 25, which helped us get a lot of finish points. Our goal was to get as many riders as possible in the front group, then finish as high up as possible after that. And we smashed it.

How did the Cobbled Climbs race go for you? Is your race hindsight always optimistic, like mine? Share below!

Good job. For us Vikings Berserker in EMEA E C1, that race was a disaster. We are a mid table team, and grab the few points we can. Somewhere in lap 3 one of my team mates asked on discord why the lap counter said 3/5 laps, noone knew, but all 6 of us had the same. C and D where. Suppose to do 3. I asked in chat, and some said they was on 3/3 and some on 3/5. Our best rider performed very well this night and finished 7th after 3 laps and did the last 2 in… Read more »

That sucks! I heard there were big problems with some C/D races… that’s sketchy!

Strange pacing, synonymous with a classic B race; people racing cautiously sub threshold, aware of their own limitations and unsure of other’s strengths. Timmermans’ one man break away sure was impressive.

Nice one Eric – CVCC is my team! Chorlton Velo Cycling Club from Manchester in England.

Although sadly I have been in the As since the end of S1… Rode with Mike in S1, good rider. We had Craig in 5th too, that route suited him I think.

Strong performance from your man who won, over a few races, he must be knocking on the door of the As.

I rode for AHDR Bombers B Div 3 in my first race and managed to hold the second group after Libby hill. The rest was a blur. I rode for AHDR Battalion Div 5, 3 hrs later and managed (despite battered legs) to hang in the top group which was finally wittled down to 6 by the last lap. Needless to say, I had nothing left for the sprint and rolled in for 6th and plenty of points overall (being in the top 10 throughout the race, which is always the goal in ZRL). In hindsight, yes, I think I… Read more »