How the Race Was Lost: Timing and Teammates 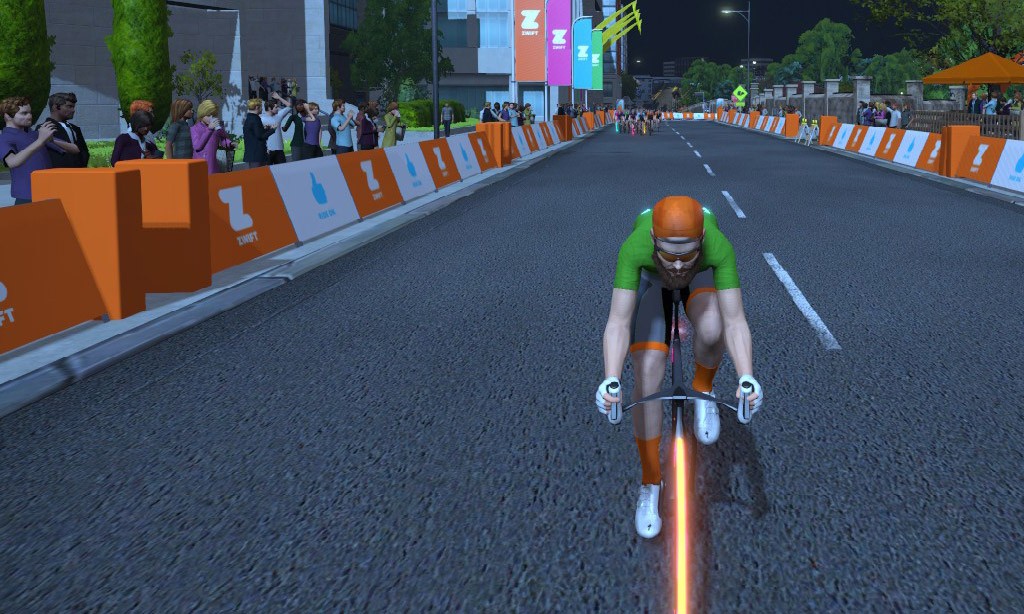 Two days without a ride and I was climbing the walls. (It didn’t help that I’d spent most of Christmas day eating cheesy potatoes, pork tenderloin, and all manner of desserts.)

I needed a Zwift race, and I needed it bad.

So I found a Crit City race happening on the Bell Lap route at 1:45PM and signed up. Let’s race!

I worked until about noon, putting together some Zwift Insider posts and replying to some of the many comments on my recent “Enforcing Zwift Categories” post. (I’m seriously amazed at all the chatter this post has generated–it’s nice to know I’m not the only racer who thinks category enforcement should be a priority!)

Then it was time for my pre-race ritual: a piece of caffeine gum and some PR lotion on the legs. Bonus: I just received the newly-formulated “next gen” PR Lotion, which is supposed to work just as well while being much less slimy/sticky/messy. Guess what? It went on much better than the old version. Hurray!

I contemplated eating something pre-ride, since I’d eaten nothing since the night before. But I simply wasn’t hungry–my body was doing just fine running off of yesterday’s calories, apparently.

Since group rides are fun, I hopped into the GGCC Glasgow Green Cycle Club Thursday Training Ride for my warmup, rolling at around 2.5 w/kg around Innsbruckring. Perfect warmup pace, with a couple of hard efforts up the leg snapper and on the sprint section to blow the cobwebs off.

After 15 miles with the GGCC group it was time to head to the Crit City start pens.

Here’s something a bit odd: I arrived in the pens wearing the green sprinter’s jersey I’d just won on Innsbruckring. Especially weird considering Crit City doesn’t even have a sprint section!

I’d noticed three other DIRT teammates signed up for the race, so I messaged them asking if they wanted to try some team tactics in the race. Only Jeff Beltramini wrote back, so we sketched out a quick game plan before the clock hit 0:00.

Things began fairly tamely, which was fine with me since Jeff and I had planned to attack on the uphill twisties in the second lap. We hit that section and Jeff took off, with me chasing his wheel.

We quickly gapped the group by 5, then 7, then 10 seconds. For a moment I thought they might actually let us get away, with Jeff putting in a massive effort and me ready to pull through once he was done. But the group began to close on us towards the end of the lap, and I realized I didn’t have the legs to keep us away. Curse my poor VO2 max!

Lesson learned: a two-man breakaway isn’t going to work here. I sure wish some of the B’s would start to follow these attacks–it would really make the race interesting to have a breakaway group of 5 working together.

On the plus side, we’d managed to whittle the field down, reducing it from 52 to 28 by the 3rd lap.

The middle section of this race was as uneventful as the other Crit City races I’ve done. When riding in the Bell Lap direction, power ramps up a bit on the uphill twisties as well as the false flat straightaway leading to the eSports stage.

But the group wasn’t pushing very hard, turning in laps around 2:37-2:39 without anyone attempting any attacks. Apparently everyone else was recovering from Christmas too!

It wasn’t until the 7th lap that I finally received a useful powerup instead of a 10XP bonus. What the heck? It was the draft van, so I used it after the uphill twisties to make my sitting in even easier.

I did my best to breathe easy and reduce my effort as much as possible without getting dropped, so I had maximum energy for what I knew would be a challenging final lap.

When the final lap began the PowerUp Gods smiled up me, giving me an aero helmet. Sweet!

Jeff and I had planned to attack hard on the uphill twisties, with the idea that we may be able to gap the group and stay away for the ~90 seconds until the finish. And that’s exactly what we did: I attacked hard, with Jeff on my wheel. That stretched out the group, with just a few riders hanging with us. Then I blew up in spectacular fashion, Jeff “counter” attacked hard, and I sat in with the riders who were chasing to catch him, being careful to stay off the front because I didn’t want to help my opponents reel in a teammate.

The group was charging hard, though, and Jeff wasn’t going to stay away. We caught him just after the eSports stage, and after my first Bell Lap race I knew I shouldn’t wait to begin my sprint. So as we hit the last left-hand turn I shifted up, activated my aero helmet, stood up, and gave it all I had!

It’s hard to look at the screen when you’re pouring everything into the sprint, but I glanced up a few times and saw that I was passing a lot of riders.

Then 2nd. It was going to be close!

I gave it all I had, but Simon Piniel from Team ODZ just edged me out, winning by 7 thousandths of a second. Chapeau, Simon! 2nd place for me. First loser!

The final lap was 2:27 long, exactly the same time as the final lap of my first Bell Lap race. In terms of power and effort this race looked a lot like my other Crit City races–but it was my best result yet, at least partly because I’m getting better at timing that crucial final sprint.

See it all on Strava >
See results on ZwiftPower >

Here are some takeaways from this race that I’ll use in future Crit City races:

I’m really enjoying these short Crit City B races, but there are two things I’d like to try:

Got any tips or tricks for Crit City racing? Share them below!

Interesting! I did a B Dolphin Course Race on Saturday and ended up in the chase group, and lap times were 2:13-2:19… be interested to see how it goes on the Bell Course.

Definitely faster than the smaller Crit City races I’m seeing. All the top finishers in the B’s in your race were over 4.0–it’s like the event didn’t have category filtering on?

We only had one rider over 4.0, and he was at 4.1. :0) That kind of power driving at the front will definitely ratchet the speeds up.

I participated in that race. We had a finishing time under 20 minutes, so no one got filtered since no 20 minutes W/Kg could be calculated 🙂 This highlights the problem with 20-minutes power as the category differentiator. I don’t think all the top finishers over 4.0 W/Kg are ready for the A-category just because they managed to hold 4+ W/Kg for around 20 minutes. All the time-trailers will have decent 20-minutes W/Kg. If the race lasts for 30, 40 or 50 minutes or is hilly, it is another story.

I think maybe the segment is messed up in Strava, I think its less than a lap, the map on the leader board shows a full lap, but if you click on the segment from the main activity screen, it shows ending before the hairpin. Our total times were too close for it to be off by 20 seconds per lap…

Near the finish line the road coming the other way is so close to the finish banner that it’s messing up Strava’s matching… so it’s not counting the northernmost part of the route.

Not sure how to fix that.

Eric, sent you (or rather the Zwift Insider account) a tweet about this – may have a solution for you…

Great write up Eric. I lived it with you.

The Dolphin course (reverse of Bell Lap) feels like a totally different animal, with the more concentrated climb for the prime, and just a bit longer finish after the u-turn. Unfortunately, i stink at crits, virtual just like IRL. LOL

I’d love to see auto braking into corners for Zwift races. I tested out RGT ages ago and they had auto braking, no matter how much power you put down you still braked into corners. There was a little graphic to show when auto braking kicked in and ended so you could gauge your corner exit sprint!

I didn’t realise Zwift already did this on one London corner. I’d only want it to be an option for races to add some more tactical elements, not full time.

Think there’s a chance they will allow the steering to be turned on for some crit events eventually? That would be great.

Not any time soon, Michael. Steering in road races is a distant thought for Zwift, I think!

Nice write-up Eric. I think you wanted to say Minimum “But just a basic “slow every rider to a maximum speed” on the two sharpest corners”.

I think it will be cool if zwift calculate your speed going into the corner, if you are to fast you loose time, so you have to slow down to take the best possible corner.

I actually meant maximum! Although I had to think about it a couple times, because it does sound weird to “slow to a maximum speed.”

You are correct. Now it makes sense.

On the point regarding proper lines in the corners – the decision by Zwift to have both a clockwise and counter-clockwise course on the same road means you will never be cutting the median. It’s a weird idea, as you’d never encounter another crit in the other direction in real life…

after using the mtb steering, i think it would be amazing for the shorter races like this. they would have to simplify the actual nature of the corners but it would make for a very interesting race if you choose a bad line and bounce along the barriers and instantly lose 10 mph.

Now we have CRR could Zwift implement slower tarmac on the outside of the corner. Leaving the apex line at full speed?

I was right there with you, even featured in some pics. Fun race.

Great report Eric. Did a race last week and a few B riders popping 4.0 w/kg and above. I got dropped on last lap 🙁 was such a fast and intense 21 mins for me. Definitely some learnings coming out of doing this, like positioning and PowerUp usage. https://www.zwiftpower.com/events.php?zid=278421

Great report Eric, it makes me feel like I am joining the race as well. But to be honest, I have still to do my first Crit Race, just to shy actually to start. But when I never start I will never get that feeling – and will not be getting better anyway 🙂