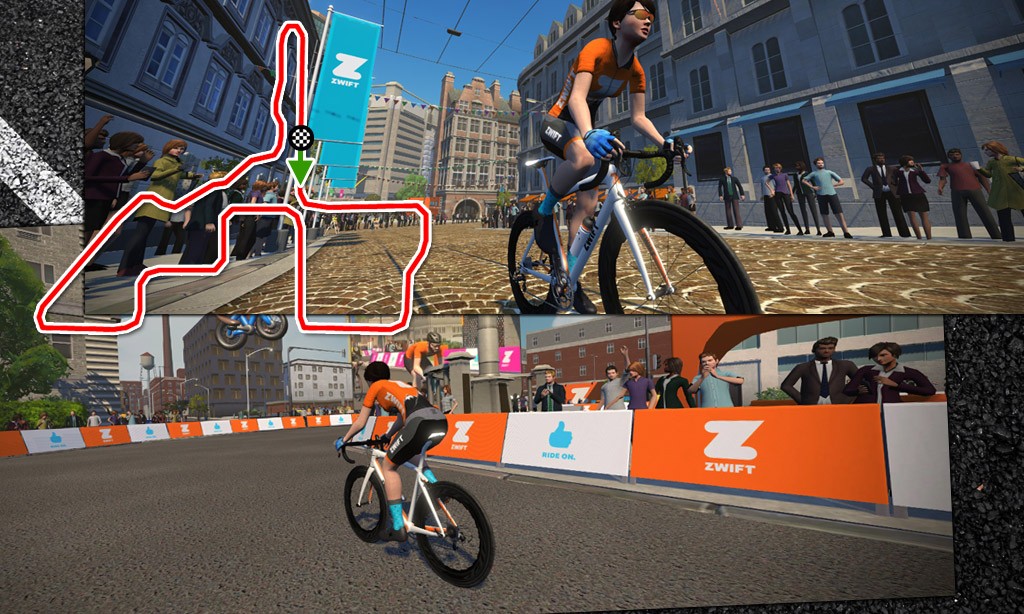 Downtown Dolphin is one of two routes on the racing-focused Crit City map released in the December 6, 2019 update. Featuring dead turns, an uphill prime section, a lap counter, and sharp corners with sightlines on city streets, this route’s layout nicely replicates the visuals of a downtown crit.

Beginning at the start pens, you ride toward the city center portion of the route. Look ahead and if your race is broken up enough you may see riders coming down another section of road toward you.

In this first section, the older portion of the city, you’ll be mostly hemmed in by buildings. As the city closes in the road tilts up slightly–a false flat which will slow riders, increase resistance, and bump up power numbers.

Past the Watopia mural on your right, with the spinning Zs across the street, you’ll round the second right-hand turn and encounter a Zwift eSports stage complete with riders on trainers, spectators, and big screens showing videos of avatars in action.

Hang another sharp right and you’ll pick up speed quickly as the road tilts downwards at 2% for this entire straightaway. Look ahead and notice the start/finish banner–this is another place on this well-designed route which allow you to catch sight of riders who are well ahead or behind.

(Crit racers know if you’re able to get off the front far enough that the peloton no longer sees you, you stand a better chance of staying away. It’s harder to chase what you can’t see.)

You’ll make another two lefts before things get crazy as the road turns right, pavement turns to brick, and the prime section begins! This 200-meter, 4% incline is the only timed segment on Crit City, and it’s where you’ll see attacks each and every lap.

The first of two “dead turns” is coming up, at the end of the straightaway containing the prime banner. Make this 135-degree turn and enter the more open and modern “business park” portion of the city which includes a sort of virtual Zwift HQ as its centerpiece. HQ includes more Zwifters (runners and riders) out front.

Next, we’ve got a fun little set of racetrack-like rollers where you’ll want to keep your speed high and make sure you don’t lose the wheel ahead! Look ahead and you’ll spot the lap banner–still 400 meters away, but this is another chance to see riders who are well ahead or behind.

Complete the 180-degree turn, passing the Scotty inflatables and more virtual Zwifters, and it’s ~200 meters flat and straight on to the finish.

Since this is an event-only route, riders will always begin in the start pens located just after the lap banner when riding in the Downtown Dolphin direction. This means you’ll ride nearly 2 laps before the lap counter shows 1.

A note about Strava segment matching: we’re seeing some (maybe all?) Zwift rides on this route being incorrectly timed on the segment, because Strava is leaving the northernmost portion of the route out of the timing. We’ve logged a trouble ticket with Strava.

When you say dead turn is it actually slowing rider speed?

Not at this time. My hope is auto-braking will be added, though.

Correct me if I’m wrong but for now those turns are meaningless without steering or auto-braking.

I wouldn’t say they’re completely meaningless, but at the same time I agree with your line of thought.

They’re not meaningless because turns do affect your position in the pack somewhat, AND they break up line of sight, so you won’t see riders far up the road as easily.

On the other hand–auto braking, I think, is the one feature missing from Crit City. Add it at least on the two sharp turns and you’ve got one dynamic race course!

Indeed, without auto braking is meaningless. That’s something.really.missing on zwift algorithm. Why make a crit if the corners are always at full gas. A dynamic auto braking systems needs to be put into place and explained to people. The system has to reduce speed in corners, the bigger the reduction the bigger the turn. Moreover, and this is really important to make the races fun is for this reduction to be even stronger if you’re riding in the pack and way less for someone in a solo effort/attack. This promotes people to attack and give them a benefit as their… Read more »

That summarizes my thoughts exactly, Pedro!

With regard to the ‘event only’ nature of this new world, is it available through the Zwift world hack? After I completed my race today I saw two different riders with the workout HUD, which seems to indicate they got there in some manner other than joining a race.

It is not. You can only get there beginning with an event. Once you’re in you can leave that event and do whatever you want, which is what those riders did.

What is the meaning of such a short route? Let them make velodrome

It’s a crit route–crits are short! It’s something different from what Zwift already has.

With that logic the first few riders and anyone tail gunning should only have a fraction of the braking that folks 6-99 have. Watch any legit crit with guys that know what they are doing or just ask Zwift’s own Mr. Bahati.

Yep. That’s the more advanced version of auto-braking that I’d like to see–one where the braking force applied is directly related to the draft effect % you’re experiencing. Or something basically along those lines.

Eric: regarding your comment above about ‘leave that event and do whatever you want,’how do you do that? When I am finished with an event that is not in the ‘default’ world of the day it seems that I am presented with options to either return to the default world, which would save my event ride and then start me on a new ride, or stay in the event world, which just lets me continue in that world on a free ride. If I choose to stay in the event world after the event has ended, how would I then… Read more »

Once you leave the event, click Menu>Workouts or hit “E” on your keyboard. Then you choose a workout and do it there in Crit City.

Velodrome would be spectacular update on Zwift!!

Is there a pavement type change when going through the park on the small down hill section? Felt like riding through mud on the one spot I was hoping to recover.

No, but they are rollers with some uphill, so you’ll feel that.

Open the menu and you can see workouts tab on the right side of the menu.