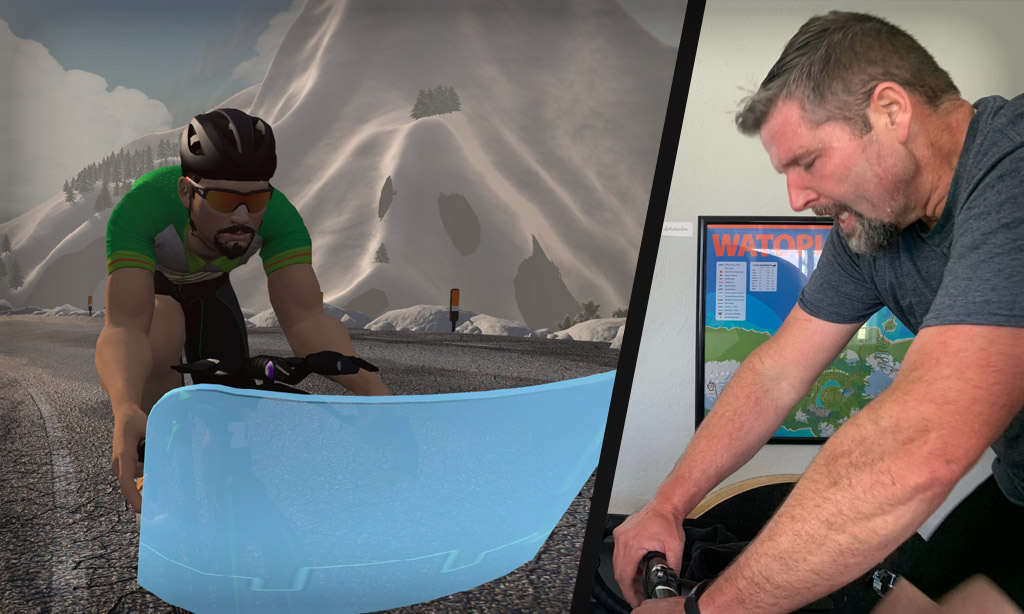 The first week was mostly about orientation and baseline testing, the second week about building endurance and improving form on the bike. In the third week we started pushing the endurance Boone was building, working to keep the watts higher over the duration of the ride. Week four was more of the same, with some cadence work mixed in.

In this fifth week, we brought VO2 workouts into the mix. Bring on the suffering!

As a reminder, here’s the basic plan we’ve settled on for the 6 weeks. (Many thanks to Alan Dempsey of HPP Coaching for giving us solid advice that sets Boone up for success).

Up to this point, the only structured ERG workout Boone had done was the ramp test in week 1. I wanted him to try a full ERG workout, just to experience it. Plus I knew it was time for him to get some VO2 intervals in, which would increase his lungs’ ability to absorb oxygen while helping him work on recovering from hard efforts as well. Great race training.

I designed a quick VO2 workout for him. Traditional VO2 workouts are 5×5 minutes at 110-120% of FTP, but I knew Boone wouldn’t be able to do 5 minutes at VO2 max right out of the gate. So we started with 5×3 minutes, with 3 minute recovery in between. Here’s how it looked…

We hadn’t tested his FTP since week 1, so I bumped it up in his settings from 230W to 250W, as that was my estimate for his current level.

We headed for the Fuego Flats desert for a fast, flat workout. I even put him on a TT bike for the full experience.

As we entered Saddle Springs I noticed Australian pro triathlete Sarah Crowley just up the road, doing her own steady ride on a TT bike. Boone ended up passing her, then getting passed, for most of his ride. I told him he was “beating” a pro triathlete, but I think at that point he was suffering too much to care.

He finished the first three intervals perfectly. The fourth almost killed him, but he completed it! (Anyone who has done VO2 workouts knows this means you’re doing it right.) For the final interval, I knocked the FTP bias down to 90%, so he could finish it.

This workout showed Boone the power and the pain of structured ERG sessions. They are powerful because they can target very specific fitness adaptations, and do it very efficiently. But they’re also painful because they can force you to do exactly what hurts the most!

Boone’s a glutton for punishment. He said he wanted to do the same workout for his next ride, but have the rest times be just 30s longer. He figured he could complete it if that was the case. Game on!

We headed out for the Mountain Route for this workout, just for a change of scenery. I figured it might be psychologically a bit easier to push sustained watts on a long climb – I know it is for me!

We kept an eye on his heartrate this time around, looking at what he finished each VO2 interval at, then what his heart recovered to before starting the next interval. Here are the numbers:

He made it to the top of the Epic KOM, and enjoyed his well-earned descent.

Ride #19: Change of Plans with Dan

This ride began with the plan to warm up with Dan Diesel before popping over to C. Cadence’s group to see how long Boone could hang at her pace.

But he ended up doing high-cadence work during his warmup, and a few short sprints, and was just having a good time free-riding Watopia Flat. So he decided to stay there.

He got in a good hour session, including a few sprint efforts with no hands on the handlebars. Yes, you read that ride. Boone still finds it a bit challenging to stay on the bars for an entire ride, as that’s not a posture he’s used to. So he’ll sit up in the seat from time to time. Today he decided to try sprinting like this.

We were both dying of curiousity wondering what Boone’s current FTP was, after 5 weeks of solid training. So we decided it was time for a ramp test.

I figured his FTP was in the neighborhood of 250-260 watts, just based on what I’ve been seeing from him. He started the test and went through each minute’s interval, bumping up by 20 watts each minute. At 260W he started feeling the effort, but he had plenty left. 280, 300, 320W… now the heartrate was getting up there.

“But you’re supposed to go until failure!” I said. Surely I had told him this before… right? Maybe not. It was news to him.

So he finished with an FTP of 257W, according to Zwift. This is calculated as 75% of your best 1-minute wattage during the test. But Boone definitely had more in him. He and I both agreed he probably had 20-30s of 360W, at least, before failing.

Boone, like many cyclists, is torn in his opinion of ERG workouts. He loves the efficiency, specificity, and fitness gains. But they’re so hard.

It won’t be easy, but we both think hitting our target of 2.5w/kg in just one more week is doable. Boone continues to drop weight with careful eating and regular exercise – he’s down 25-30 pounds in 5 weeks! And his FTP is increasing nicely – heck, we don’t even know what it actually is, but it’s jumped at least 27W in 5 weeks based on the ramp test results!

Our target right now is for him to weigh in at 235 pounds, and test at an FTP of 270W. That’ll give him an FTP of 2.53w/kg. It’s going to be challenging week for him, with being out of town for one of his scheduled rides plus the tasty foods of two birthdays and Valentine’s Day in his near future. But he’s committed to staying the course.

Boone has been using my Zwift setup for this 6-week challenge, but he’s looking to get his own setup. We thought it would be fun (and helpful) to reach out to Zwifters for advice. And maybe, just maybe, one of you may have a bike for sale that fits? (It’s hard to find a decent bike these days, especially with our local shop having nothing in stock for months.)

Here’s what we’re wanting help with. Please share in the comments below…

Thanks to everyone who followed Boone on Zwift and Strava and gave him lots of Ride Ons and Kudos. He’s loving it! If you haven’t done so yet, follow him on Zwift (name “Boone Bridges”) and Strava.

Got any tips for Boone? Comments on this week’s efforts? Share below!

Love these updates and always give Boone a ride on when i see his activities pop up. What amazes me is the sprint power he can generate! I am a Cat B @ about 3.7w/kg but can barely hit 850w (700w after a hard race) what is his secret???

His secret is big legs! 17.5″ calves are no laughing matter. ﻿😀﻿ I think he’s probably got a strong core, too, from his daily work, which provides a good platform to push from.

Thanks for your support I need al the help I can get as Eric just yells at me and mocks me for being a fatty.

Boone – Eric looks smaller than you. Threaten him that you’ll sit on him and fart.

Hahaha that has been done in the past !!!

If I was setting up a Zwift package:
Kickr5
CAAD13 (or similar stiff bike…find an old Klein)
Win Laptop/PC with 40″+ 4K TV on ANT+

I don’t do MACs and I like ANT+ way more than BT. I have an ATV 4K that I do a couple of times/yr.

I have this super-stiff bike for sale but I think it might be too small for him: Felt Z4 56cm – bicycles – by owner – bike sale (craigslist.org)

I use a lenovo yoga laptop with a ant stick plugged in. Then picked up second hand tacx flux 2 and specialized bike just for indoor training off of FB marketplace quite cheaply. All in all works well and signing up to a club (I joined evo) allows for some high tempo sprint races 20-30 min or joining in the ttt races that are 45-60min killers with some nice group morning rides 1.5-2w/kg (or higher if you fancy) but something for everyone.

One of my favorite weekly articles on here. Keep it up Boone!!!

I’m 5’8″ and 240 pounds and have similar outputs to Boone. I really think the secret is that huge legs and 240 pounds stomping on the pedals can generate some big numbers! Just don’t ask either of us to keep up on the climbs!

Great article as ever. In a FTP test is it best to stop when your cadence dips below say 70 rpm or is it worth stamping on the pedals for those extra few seconds?

You’re supposed to go until you can’t pedal anymore. Which Boone didn’t do in this test!

I assume Boone is not a diehard cyclist, and so doesn’t like to spend huge sums on biking equipment. I run Zwift on an iPhone 8 that is my daily phone, and none of the issues that I read about on ZI affect me (e.g. the TDZ rides are fine). I have an HDMI out dongle ($20), and mirror the screen to an old TV I wasn’t using anymore. I’m sure whatever smartphone Boone has will work as well as mine, with zero new investment. My trainer is the Kickr Snap, with about 10,000 miles on it, and never an… Read more »

I would recommend this setup (I have the same setup and I am so pleased with it 🙂 ): Tacx Neo 2 (T) Gaming-Laptop with good GeForce graphics with enough power running zwift in 4k with all details on max 46″ 4K-TV in Front minimum one big Fan in Front Table near bike with a Tablet rack on it 10″ Tablet for running Zwift Compagnion App Additional Small TV next to the big one (big one for Zwift, small one for watching TV during long sessions) Wahoo Heart Rate Monitor Lots of towels 😀 Stay safe and have a lot… Read more »

I use Apple TV 4K in conjunction with a 21 inch TV and an Elite Suito Direct Drive trainer. I am delighted with this set up. Due to the size of my house and available rooms I have to set this up and take it down each time I use it. This includes going to the shed to collect the bike and take the wheel off. I work out first thing in the morning and set up the evening before and then take it down immediately after the session. It takes ten minutes either way. For ease of set up… Read more »

Just wanted to say that I love these updates and this ”series”. Hope you will do more similar series / initiatives going forward 😀

I love this series. Boone’s a lucky dude to have a buddy pushing him with so much positivity like you are Eric!

My recommendations – solely on the it just works factor:

No fuss over a remote, sweating on your keyboard, extra cords or ANT+ dongles. Bluetooth picks up the smart trainer and HR with no fuss.

I have the exact same setup and love it. My only issue is my Tickr has become a bit of a random number generator.