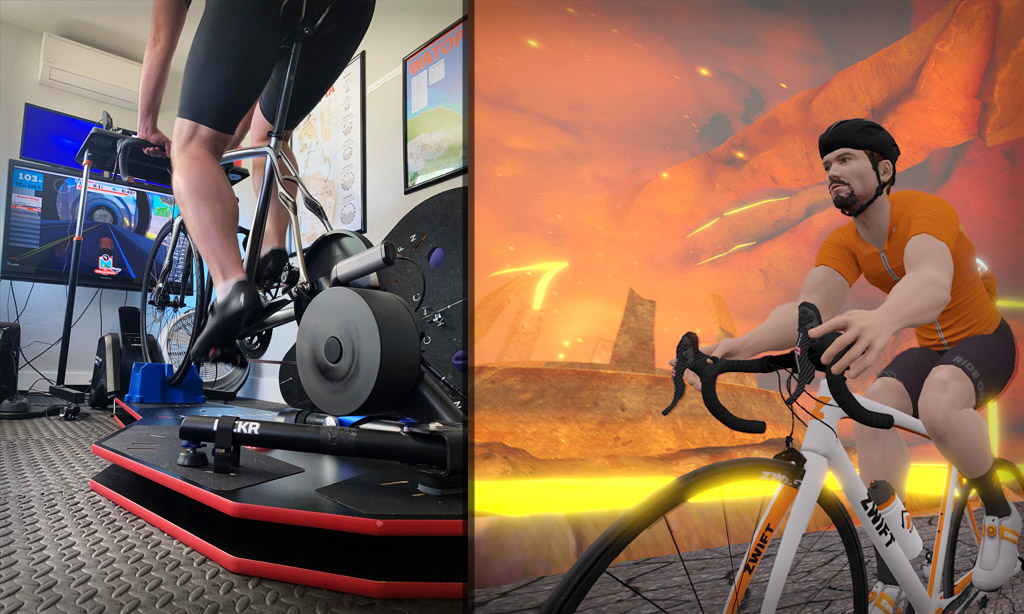 As explained in the first post, my cousin Boone and I are conducting a glorious experiment, not unlike the time much younger versions of ourselves taped a bottle rocket to a paper airplane and struck a match to see what would happen next.

We’re not sure how much fitness he can gain with a 6-week training program on Zwift, but he’s all in. Our goal: to transform a 265-pound rookie rider with a tested 1.92w/kg FTP into a cat C Zwift racer (2.5w/kg+) in 6 weeks.

The first week was mostly about orientation and baseline testing. This second week was about building endurance and improving form on the bike.

As a reminder, here’s the basic plan we’ve settled on for the 6 weeks. (Many thanks to Alan Dempsey of HPP Coaching for giving us solid advice that sets Boone up for success):

Boone had a simple goal for this ride: to stay on the bike for a full hour. He had been increasing his ride time on each effort, and he felt he had a full hour in him this time.

We put him in with Dan Diesel, Boone’s favorite riding buddy. And Boone spun with Dan’s group for about 45 minutes, before he ran out of steam, dropped off the back, and spun it easy for the final 15. He was pretty tired when he hit the hour mark… but he’d done it, and was stoked about that!

While his legs were tired, Boone said he felt like the biggest limiter was pain on the sit bones. But he knows that just takes time, so he’ll keep at it.

Ride data (this will be interesting for future efforts):

The next ride (two days after ride 5) was more of the same, although Boone went for 70 minutes this time. Once again, he lasted about 45 minutes with the Dan Diesel group, then dropped off and took it easy for the remainder.

This ride’s plan was similar to the previous two, although Boone was going to try some “spinups” to work on muscle firing pattern efficiency and force production. In these spinups, he would just up his cadence to the max he could do without bouncing in the seat, then try to hold it for 10-15 seconds.

The wattage I saw from his first spinup was impressive (reminder: he’s using my Zwift setup with a Wahoo KICKR v5), so I told him to shift down a gear or two for the next one, to see what he could get to.

And here’s the crazier thing: it was a seated effort, and the reason he didn’t go higher is because he spun out. So we took a mental note to try another max wattage effort soon. I bet he can unlock the 1.21 gigawatts achievement. What do you think?

This ride was a bit of a “breakthrough” for Boone. He was able to keep it power high without “crashing” in the final ~15 minutes… and his heart rate was lower than it had been in the previous two outing. Looks like progress!

He’s getting close to averaging 20mph for an hourlong effort, which is a fun carrot to chase. But to do it, he’ll need to ride faster than Dan Diesel, which means less drafting benefit. Hmmm…

Boone felt so good the day after Ride 7 that he hit the treadmill for a hard uphill hike. When he showed up the next day to ride, he was still feeling the previous days’ efforts.

Since Ride 8 would be followed by Ride 9 24 hours later, we decided to keep this ride short and work on out of the saddle form instead. Something that wouldn’t fatigue him too much, but still accomplish some useful goals!

We decided to tackle the Volcano Climb for this ride: a short flat warmup, then ~15 minutes of steady climbing where he could work on getting out of the saddle. (Boone’s a big dude, you see, and we had to bump up the Trainer Difficulty to give him enough resistance so he could stand and ride at 60-70rpm cadence.)

Boone lasted exactly 25 minutes in his first ride of week 1, and by the end of week 2 he was doing 70 minutes. Seems like progress to us! He’s also been watching his diet, and thus dropping weight. That’ll boost the ol’ watts per kilo. So far we’re both happy with the progress.

It’s been quite a while since Boone engaged in regular cardio exercise (outside of his work as a master carpenter, which often has him huffing and puffing). He’s already commented more than once that he’s really feeling good after these rides – so that’s a good sign. This is how the addicition begins!

Next week will be more of the same, although I want to get Boone to join Cara Cadence for 10-20 minutes, to see how he hangs with her faster group. And we definitely need to test his max sprint power – those legs are strong!

Thanks to everyone who followed Boone on Zwift and Strava and gave him lots of Ride Ons and Kudos. He’s loving it! If you haven’t done so yet, follow him on Zwift (name “Boone Bridges”) and Strava.

Got any tips for Boone? Comments on this week’s efforts? Share below!

How about a group ride with some challenges in there? An “easy” ride with sprint segments or some carrots to chase? You know all the “Great community rides” and it shows another side of the Zwift universe

It’s a good idea. He’s getting a fair amount of “group riding” in with Dan Diesel, but having one with a real leader would be a good experience for sure. Hmm…

It gives more of an incentive to follow advises on sprints or climbs. This will give stimulus to go “above limits”. Or a chatty ride that shows the joy of interacting with others above riding with them

It is really nice to follow Boone’s adventures, I am curious to see what he can achieve in 6 weeks, and hopefully this will convert him into a big cyclist. Go Boone go! That being said, I am jealous how (relatively) easy it is for him to reach those high watts. I don’t think I’ll ever be able to achieve those badges since I am much lighter (the 1.21 Gigawatts would translate to roughly 20.7 W/kg). Wouldn’t it be more equal if the badges worked with W/kg instead of pure Watts?

I feel Boone’s pain. Been riding for 3+ years and I still get sore after an hour. 3 different saddles, copied my fit off my IRL bike, and still no relief. Can’t see how people ride for 3 hours.

I already use a rocker. Never heard of a spinning saddle. Unless you mean one of those tractor seats:).

I use a Brooks B-17 on the trainer. The width and leather make it more comfortable, for me, on stationary bikes. Might look strange on an SWorks Venge, but your rear end will appreciate the old world comfort. You can trust my buns.

+1 on the Brooks saddle. The 2 pound weight hit doesn’t matter on Zwift and there’s no road shock to deal with. It’ll work way betterer…

Another +1 on the Brooks. The great thing is that the longer you ride the more the saddle adapts to your personal geometry. The initial breakin can be not so fun but as a larger fellow with a lot of weight to support I’ve had great results with mine after about a month of solid riding. Just make sure you find one with a proper width for your tailbones.

Look into rocker plates. There’s a FB group dedicated to them.

Can you post the actual zwift workouts you’re doing so we can follow along with our own experiment?

(Boone’s a big dude, you see, and we had to bump up the Trainer Difficulty to give him enough resistance so he could stand and ride at 60-70rpm cadence.)

Im a big guy too. What was the original TD and what is it now?

No, we didn’t record any video this week.

When riding with Cara Cadence, Boone should try to catch her when the group is relatively small. It’s often huge and positioning is hard. You can be in the group and still drop out of the zone.

Today I rode with her for about 15 min right after I rode the TdZ stage 4. Through Fuego Flats forward (7.8km @ 11:49) I had to average 3.18 w/kg to stay with her, a few times I had to do a mini sprint to stay inside the drops multiplier zone.

I recommend listening to AC/DC while Zwifting 😉﻿ ﻿🤘﻿

So today I rode with Cara again, for about an hour, only this time I just averaged 2.96 w/kg to stay with her.

There could be two reasons for this.

Very interested to follow this series! Boone and I aren’t too far in terms of size and watts/kg. I started cycling last summer but then stopped when the weather got cold until last week when I purchased a kickr, so I’m pretty much back to square one, not unlike Boone.

Hello , very motivational article , I would like to ask if is any chance to receive the training plan that Boone did ?

It’s not a plan with structured workouts… not a typical Zwift training plan. The details you see in these posts describe each ride, though.

Nice setup. Question: what do you use to mount the two monitors above the TV? I have a 55″ TV VESA mounted on a tripod off the floor, and I’d would love to mount a monitor above the TV like you! I have seen setups where another separate stand is used to hold the monitor above a TV (one stand for TV another stand off the floor for monitor), but you seem to have something else that’s more cleaner. Thanks.

On further thought, let me guess….are you using two wall mounts? One for TV and perhaps another to hold the two monitors?

I’m using this mount for EACH of the smaller monitors: https://amzn.to/2M6cyYp

And this mount for the big TV: https://amzn.to/2Y0FvYr

Eric, do you mind if I ask what you use the upper monitors for? I like the setup!

Various things… basically the TV is ONLY for Zwift. So if I need to open a web browser, run OBS, change Bluetooth settings, Discord, Spotify, my Hue lights… all those windows open on the upper screens.

It makes it very easy to browse the web while riding, which is nice. Handy for running a ZwiftPower window during races, for example…