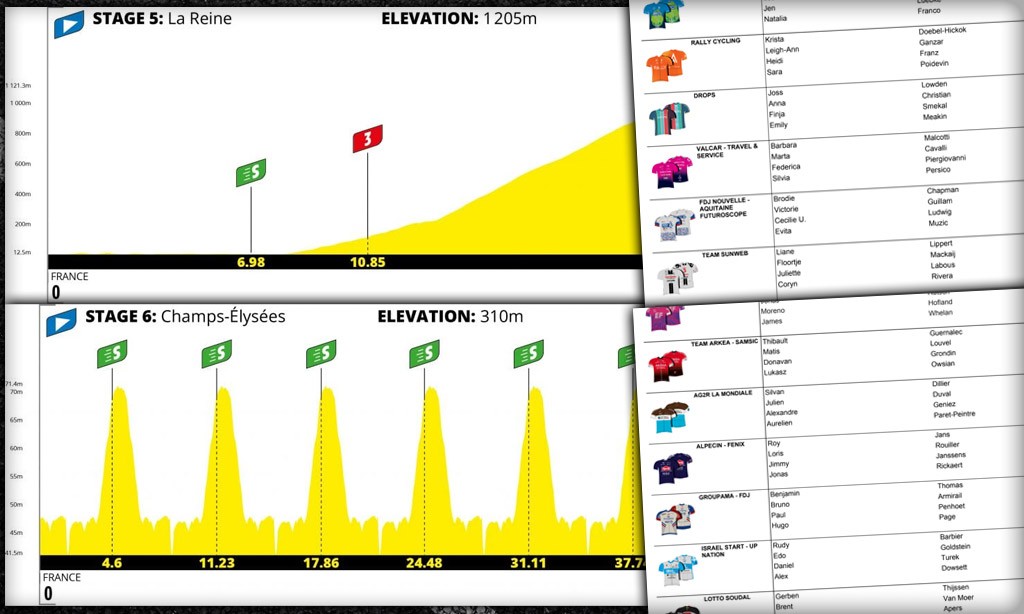 Saturday’s stage is the Queen stage where the world’s top climbers will take on the massive Mont Ventoux climb – the biggest climb in game! They’ll only be climbing to Chalet Reynard, which is located 6km before the finish line at the top of Mont Ventoux. But it’s still going to be a battle of w/kg to the finish!

Remember, this is a team-based points competition. For the women, Canyon//SRAM Racing is leading the Team Overall GC, but Team Tibco – Silicon Valley Bank and Drops are just behind. For the men, NTT Pro Cycling has a commanding lead in the Team Overall GC, but there’s a close battle for the next few spots. Competitions for the yellow, green, polka-dot, and white jerseys are also in play.

Here are more details for each of this weekend’s stages including start lists, race times, and more.

The La Reine route takes riders over the Ballon Sprint and Petit KOM segments before heading up Mont Ventoux. Expect a bit of action from teams looking to pick up green jersey and polka-dot jersey points on these early segments, but the real work will begin when the riders turn left after the Petit KOM and head up Mont Ventoux to Chalet Reynard.

Obviously there would be no other place for this Virtual Tour de France to finish than on the world’s most famous boulevard! After 5 stages the race will draw to a close on this sixth stage to a backdrop of the Arc de Triomphe on Zwift’s new Champs-Élysées route.

Expect this stage to be raced full-gas from start to finish, with 6 intermediate sprints as well as points on the line.

The easiest way to watch it online is through Zwift’s YouTube channel, although the quality may be better on TV channels.

Please unsubscribe me from this whatever it’s called. Thank you

Love to ride Zwift, but watching these races on TV is terrible. I prefer (and this is not to prove my point) watching Bottas or Hamilton win the F1 qualification or race. Even if they race on the second time on the same circuit 😩

I would have to disagree. I’ve found the racing really entertaining. And I’ve really enjoyed watching the women’s races in particular and learning some of the names I’ve never heard of, particularly some of the younger riders just starting out, and of course the Aussies!
Aside from the entertainment value, I think this series has been really good for promoting women’s cycling and I plan to follow some of the Aussie women in real life racing when we get back to it.

looking forward to the Ventoux stage. Based on earlier data, if Ashleigh Moolman-Pasio is on form, she’s my pick to win for the women, and maybe Rohan Dennis for the men. Riding L’etape myself for Ven-Top tomorrow.

So, I’m a paying Zwift subscriber and have been for almost 2 years, and yet basic features that have been top of everyone’s list of “must haves” are still delayed so that we can subsidise this nonsense!? Honestly, as soon as a viable competitor comes along, I’m out – and so will millions of other paying subs. Zwift will be a CLASSIC lesson in “follow the user”, instead of “do what you think is cool”.

While I do agree with the frustration and have the same opinion… Only thing that surprised me is the “millions” you’re referring to cuz even at COVID peak, we saw like only 40k riders. But def agree on UI and feature requests…