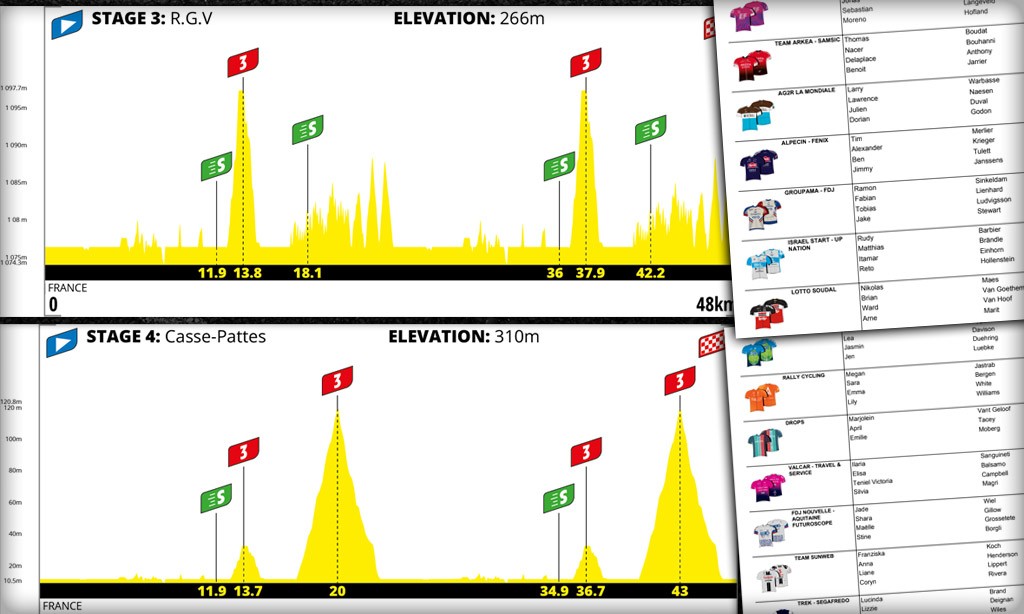 While both stages this weekend are fairly flat, expect a lot of action on stage 4’s Petit KOM, especially on the second lap where the climb ends just 2.8km from the finish line. (The Petit KOM is around the same length as last week’s Hilly KOM Reverse, but twice as steep!)

Here are more details for each of this weekend’s stages including start lists, race times, and more.

This week the peloton leaves the virtual world of Watopia and heads to a newly created ‘native’ virtual France, a debut course created by Zwift especially for this historic event. Racers will tackle two laps of the fast R.G.V. circuit. Starting in the flatlands of virtual France there will be plenty of opportunity for the sprinters to test their legs and pick up green jersey points with two intermediate sprints up for grabs per lap, the first coming 11.9km in with the Pavé Sprint Reverse.

But sprinters will need to recover fast as the first Q/KOM point opportunity comes less than 2km later with the Category 3 climb: ‘Aqueduc Reverse‘. The second Skoda green jersey sprint point comes next with the Ballon Sprint Reverse. The race finishes at the R.G.V marina at the end of the second lap. Expect to see Team Tibco-Silicon Valley Bank and NTT Pro Cycling working hard during the day’s stage to protect their green jerseys.

Stage four sees the race move from the virtual French flatlands to slightly more challenging terrain. This day will be a day for the puncheurs. If you loved the castles and quaint French town of R.G.V., then there’s more of that in store during Casse-Pattes. This route starts off on the flat with a brief opportunity for the sprinters to score points in the green jersey classification at the Pavé Sprint Reverse. Following this, the racers will tackle two Category 3 climbs, the Aqueduc KOM Reverse followed by the longer Petit KOM. Racers then descend quickly back to the R.G.V. marina finish line where they will begin their second and final lap.

The rolling terrain of Stage four could provide the perfect opportunity for the breakaway specialists but expect Drops Cycling and Israel Start-Up Nation to be ready to fight to the top of the climbs as they attempt to keep their polka dot jerseys.

The easiest way to watch it online is through Zwift’s YouTube channel, although the quality may be better on TV channels.

Click to view current standings for women and men

This page includes an explanation of how the points system works.

It surprises me a little that they didn’t use the already existing Alpe du Zwift, and instead created a new world with a new climb. But Alpe du Zwift is a more significant climb, and perhaps for the types of events they are creating, this works better.

I was surprised how much I liked stages 1 and 2. It was fun seeing racing on roads that I have actually ridden (although it does remind me that I am too old and fat for this sport).

My guess is, they wanted the TdF to take place at least somewhat in “F”! 🙂

Having just ridden L’etape du Tour, it’s a great course and I’m looking forward to seeing how the pros race on it!
It’s also fantastic that the only Strava segments are “sensible” ones – mostly from ZwiftInsider – and I would love it if this remained the same way into the future.
I’m really looking forward to comparing my segment times against the pros on Strava this afternoon – without having to scroll past row after row of segments with meaningless names! 🙂

It should remain that way, since all new virtual segments are private ones. Here’s hoping!

How’s the aqueduct a cat 3 climb?

In Zwift parlance, Cat 3 is the “catch all” for any KOM segments that aren’t 1 or 2.

Hi Eric, thanks for all the good tips and tricks. This weekend i rode the tour de etappe and even though all the riders had the same Trek Domane frame some riders had different wheelsets. I noticed Zipp808. Can you control this? Would you need to select the specific Trek frame and Specific wheels prior to start to keep The same configuration in the game? Or can you select any frame to keep the selected wheelset? (I selected the Tron bike for casse-pattes, and got Trek frame and standard wheels, so i am not sure if the Tron was the… Read more »

I discovered yesterday while riding Casse-Pattes that there are several MTB singletracks crossing the road. I haven’t heard anything about these tracks yet. I really looking forward to ride it.