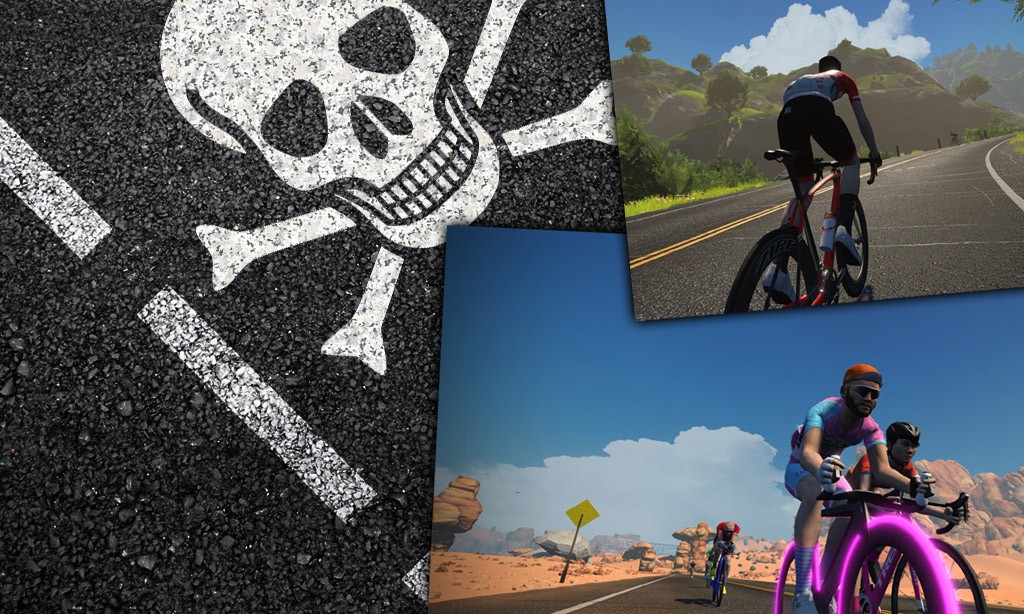 Riding Watopia’s pre-planned routes is a blast, but sometimes it’s fun to go your own way. Here’s the first in a series of “rebel routes”–those which are not defined in Zwift, thus requiring manual turns. (EDIT: see additional Rebel Routes here >)

The reward? Enjoying a new route, knowing you’ve gone where few Zwifters have gone before. And a Strava segment rank in the tens or hundreds instead of the thousands!

I’m currently the Strava KOM holder on this route: who’s going to take it from me? Come and get it!

We begin on Fuego Flats at the spawn point, moving clockwise around the desert loop until it drops us off on Ocean Blvd. Take Ocean Blvd to downtown Watopia then hit The Esses to the Italian Village. Take a right at the fountain to head towards the Volcano, then a left onto the glass bridge before continuing straight onto The Esses once more.

This time when we hit the Italian Village we’ll continue toward the 360 Bridge, but hang a right before we get there onto Ocean Blvd. We’ll ride almost the entire length of Ocean Blvd, turning right after coming out of the tube so we can head towards our start/finish line. The route ends at the sprint start/finish rock arch.

At 3.92 meters of climb per kilometer of travel, Triple Flat Loops is flatter than all official routes except Tempus Fugit and Tick Tock. Still, the inclusion of the bump outside of Saddle Springs, two Ocean Boulevard upramps, the Esses (twice) and the final bump into the desert provide spots for strong riders to put in digs and gain time.

When freeriding, select the “Tick Tock” route to begin. You will spawn just before the desert start pens, giving us a lead-in of approximately 2.5km before the sprint finish line rock arch, which is the official start/finish line for this route.

Here are the turns you’ll make to complete this route:

I think the directions need one more turn: straight to desert flats at the titans grove turn off at the end.

Do you earn badges for each route you complete when you self-navigate multiple routes?

Nope. You have to choose the route when you start the game.

I did this yesterday evening. At the second turn i was a little bit confused cause there was no ability to choose “Right to Sequoia Circle” but only “Right to Titans Grove”. 😉
Despite that it was a nice course. Thanks.

I also took the wrong turn at Titan’s. Maybe the route was added before Titan’s Grove was added so those turns at the beginning and end weren’t there yet. I’ll know that when I do it next time.

I tried it just now twice, but it think the route turn-by-turn is wrong. It seems nr 3 is not there. Right to downtown should be after approx 11km (at 11 km is right to titan grove) but there is no right to downtown

Think I fixed it. Was missing #2: Straight to Epic KOM

I will try this evening but comparing segments on strava and veloviewer It seems is goes wrong at around 11 km. I will take a scrshots of all the possible turns

Excuuse me I was mistaken. Comparing the segment again the turn at 8,4km seems to be wrong. Maybe the KM’s are wrong or changed. This was my first choice 2nd time around