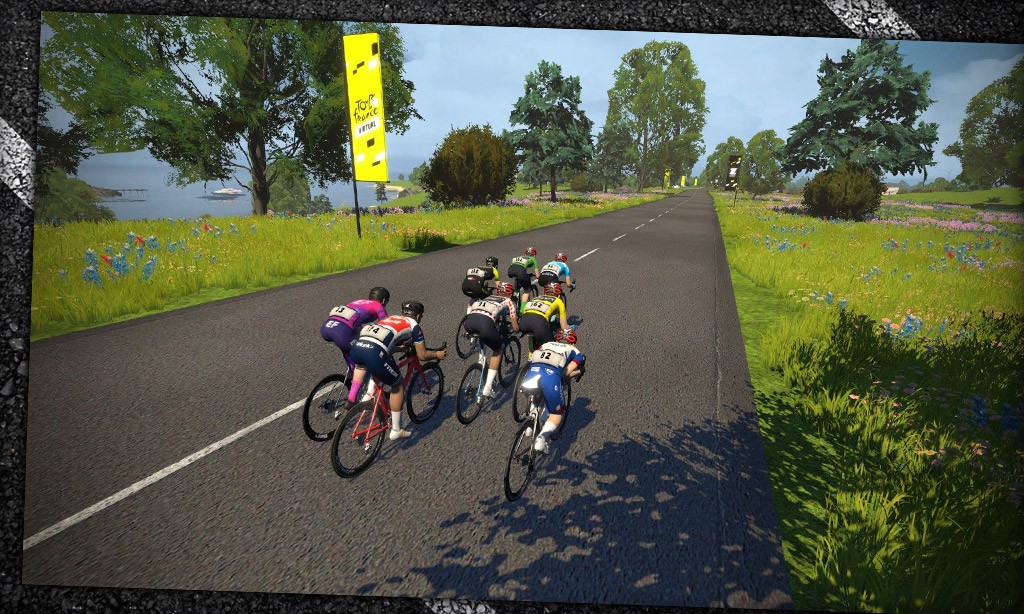 The stage 4 finish in the men’s Virtual Tour de France was a thrilling finale to a hard-fought race. With a reduced pack of only eight riders which included two pairs of teammates, the final kilometers probably would have played out differently if the race was outdoors where these top-level pros have much more experience. But here on Zwift things are a bit different – powerups come into play, physics are tweaked, and you don’t have the precise positioning and immediate feedback afforded to outdoor racers.

What makes this finish interesting is the interplay between riders as some execute their finish perfectly and others make missteps. Let’s dig into an analysis of the final minutes of Sunday’s men’s stage 4.

As expected, the final climb up the Petit KOM was the decider for many riders, thinning the herd from ~30 racers to just 8. This front pack of riders crested the top of the climb with a 6-second lead on any chasers, and they would stay away for the rest of the race:

1000m: Gogl activates his draft boost powerup from the back of the group and powers off the front of the group at 8+ w/kg with Valgren on his wheel. They quickly gap the group by perhaps 15m, although Ovett responds quickly, coming around the group to grab Valgren’s wheel. Then almost as quickly as it started, both Valgren and Gogl “sit up” and rejoin the group.

758m: Turek activates his burrito powerup from the back of the group, then powers through the pack to the front.

658m: Turek, with his burrito powerup still active, is the first rider to hit the cobbles of the bridge, attacking off the front at 11+ w/kg. (It’s marginally easier to put time into your opponents with an attack on cobbles, since rolling resistance is higher on Zwift cobbles than tarmac. Cobbles or other slow-rolling surfaces in Zwift behave like a false flat in terms of attackability.)

He manages to create a small gap by the 600m mark. His teammate Ovett wisely sits in the pack, making the others put in the work to reel him in. Turek’s move here is a smart one, softening the legs of his competitors heading into the final sprint so his teammate Ovett has a better chance at a win.

508m: Clarke activates an aero powerup, powering off the front and creating the biggest gap so far. But can he stay away to the line?

430m: Madouas activates his draft boost powerup. This is a smart move, but he could have activated the powerup around 8 seconds earlier and still had it active all the way to the line. Every little bit counts, and the draft boost gives 30s of increased draft – a big help in a pack sprint!

300m: (Somewhere around here, Ovett and Shultz activate their aero powerups. They aren’t visible on-screen when they do so.)

150m: Clarke is on the front but flagging as his aero boost runs out. Valgren is ~30m behind him and still pushing hard, but with no powerup.

Ovett played this finish perfectly, chasing down the initial attack from NTT, then sitting in and conserving until just the right time. Shultz also rode the finish smartly, sitting in the wheels then activating his powerup to maximum effect. Valgren put in a massive effort, and even used his teammate Gogl for a bit of a leadout in the final seconds – but he jumped early, and had no powerup to help him in those crucial final seconds.

Sprint finishes in top men’s races on Zwift often start from way out, and this after a hard run-in in the final kilometers. (Today’s sprint for the men began ~100m earlier than the women’s sprint on the same course.) Did Clarke jump first and go long on purpose? Both his legs and his powerup ran out early, suggesting he mistimed the finish.

The rider who jumps first rarely wins. It’s the cagey, patient riders like Ovett and Shultz who are usually able to take the win with a well-timed powerup and burst of sprint power in the final ~200m.

Could NTT have played this differently, with better results? Probably. Gogl’s odd abbreviated attack at 1km seemed like a slipup on his part. Did he mistake his van powerup for an aero boost? Both he and Valgren may have been better served if Gogl had used this powerup in the final sprint, chasing down whoever jumped first in the sprint, keeping Valgren on his wheel for the sprint leadout. Nevertheless, NTT finished strong in this stage, building on their commanding lead in the overall team GC as well as other classifications.

wait… there are powerups in the virtual TdF? seriously?

From what I hear, the ASO very much was in favor of doing so. To make the racing more interesting, I think.

I thought Turek’s overall race was amazing. What he did on the climbs was incredible.

Yawn. Who cares? Is it just me? Spinning idiots. Cartoon characters. Zwift is just fine and I use it a lot for exercise, but as a substitute for a real race? Zzzzz.

Especially when they are using my monthly fees for this crap.

Real tdf stages are also bloody boring most of the time too. Why do people forget this when they slag of zwift racing?

I warch vTDF on belgian TV. They are very negative about it, because they are obliged to broadcast, but have oldfashioned commentators yearning for the real thing. They especially dislike powerups, which proves to them this is just a game. I think PU’s should not be part of vTDF. Let people get used to the new reality of virtual racing first while staying close to what they know from outdoor racing.

Was it just me, or did the last portion of the Men’s race seem extra-glitchy? On several occasions I saw riders go off the front and then disappear (and not because of an invisibility powerup!), only to reappear later, I assume. I also even saw an avatar do the “ride in a tight circle and rejoin” glitch, which I thought was fixed in the latest update. I also found that the sections of the course with repeated twists and turns really accentuated the unnatural behaviour of avatars in a pack. Every time the road straightened out again, it seemed that… Read more »

Eric, Would you have any info on success of running Zwift on Linux or if Z-coders are working to add Linux OS option? Thanks
Francis

I’ve put together a guide on how to run Zwift on Linux here: https://jamiemagee.co.uk/blog/zwift-on-linux/