Speed Tests: PowerUps, Frames, and Wheels for Sprinting on Zwift 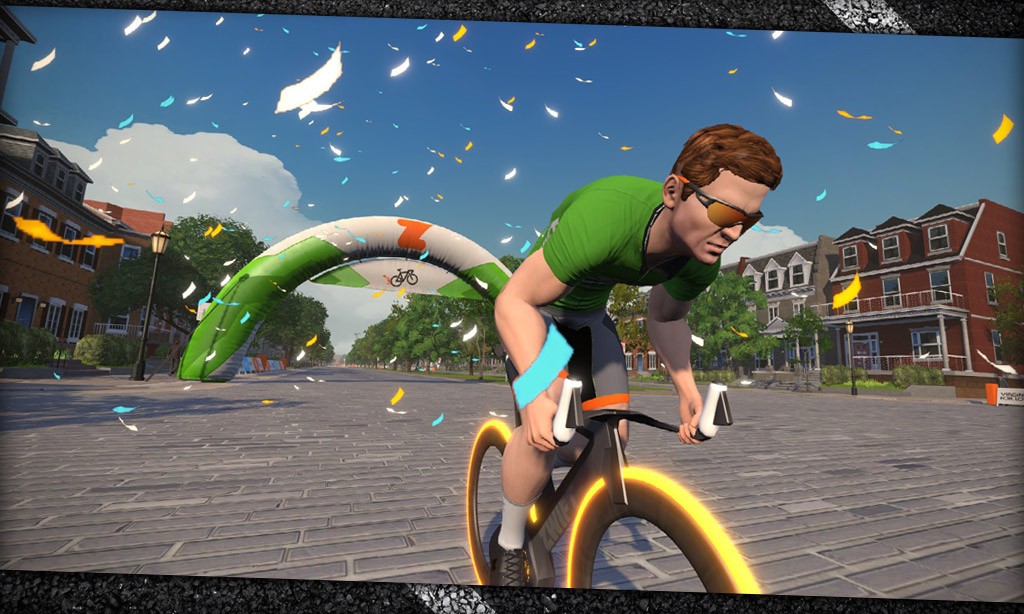 Most Zwift races come down to a pack sprint, and many of those sprints are won by a half-second or less. Because of this, smart racers would be well-served to understand how powerups and equipment selection influence their sprint times.

We’ve recently run a bevy of tests to learn how variations in rider weight, height, power, powerups, and frame/wheel choice affect sprint times. We’ve summarized the findings of these results below, but if you’d like to dig into the raw timing data you can do so on this Google sheet, under the “Sprints (Richmond)” tab.

We ran a series of test sprints on Richmond’s Monument Avenue forward sprint segment. We selected this sprint because the road is quite flat, straight, and the sprint lasts approximately 15 seconds, so our powerups can run for the length of the sprint.

Our tests were run in isolation (no drafting other riders) at various rider weights, heights, and steady-state wattages. We also tested various frames and wheelsets. Unless stated, test results shown below are from a 75kg, 183cm male rider holding 750 watts.

Our rider held the set wattage for at least a few kilometers leading into the sprint to ensure that acceleration from wattage changes did not affect sprint times. When powerups were being tested, we activated them at the sprint start line so they would run for the entire length of the sprint. (While this may not be what happens in a race situation, it was the most repeatable methodology for the purpose of these tests.)

The aero powerup improves sprint times significantly, which explains why it’s the most coveted powerup for a race finish!

The amount of time saved by the aero powerup decreases slightly as wattage (and therefore speed) increases:

The time saved by using the aero powerup in a sprint is quite consistent across different combinations of frames and wheelsets, varying 0.02 seconds or less between different frames/wheelsets.

So the faster you’re going, the more of a wattage “bonus” the aero powerup offers.

The feather powerup improves sprint times consistently, regardless of which frame or wheelset you use:

The amount of time saved by the feather powerup varies when wattage varies, but not in a consistent way we can explain. Here are the results of our tests (repeated to make sure they’re correct):

We already know height significantly affects speed in Zwift, since it is used to compute your virtual CdA. Our tests showed that, all other things being equal, every 10cm of height added results in a sprint which is 0.16-0.21 seconds slower:

Your frame and wheel choice affect sprint times, in approximately the same ratio as they affect times at normal race speeds. Therefore, our lists of fastest frames and fastest wheels also holds true for sprinting.

Note: without more timing accuracy in-game and on Strava, it is difficult to determine if the percentage variances above are due to in-game physics or rounding.

Therefore, your fastest sprint setups on flat ground will be (from fastest to slowest):

By comparison, the base Zwift Carbon frame with 32mm wheels which every Zwifter begins with turns in a sprint time 0.33 seconds slower than #1 above.

So Specialized S-Works Venge w/ Zipp 858/Super9 wheelset and Aero Power-up is the fastest “Road Bike” combination currently on Zwift — or insert the other fastest frames (Felt DA, S5, etc…) which are virtually the same cause Zwift isn’t going out 3 decimal points. I’d imagine if you’re in a race that allows TT bikes theres a hand-full of TT bikes that would be faster; albeit, without drafting ability in a race you’re not likely to be in the final sprint.

Is there any benefit to the draft boost power up when you are solo (i.e. not drafting)?

Curious if you use the draft boost (the van/truck) and you are on the front of the group – still with the group though. Do you get a benefit being #1 rider in the group but not otf with this power up?

If you’re on the front that means you aren’t drafting, which means the draft boost doesn’t have any effect.

So, then would Tron be fastest if you incorporate weight of bike/wheels as well (assuming a non climbing race)? Again, assuming drafting race, not TT. Seems the Zipp disc’s will be heavier than a Tron…﻿😳﻿

What I’ve wondered about the sprint is what’s the effect of power ups and wheels on the acceleration part from say 400w to say 800w. Different test and not sure how you’d do it. I often use the 454s and believe in my head they’ll accelerate faster.

All the weight and height at uff like this is disheartening for a 190cm 91kg guy like myself.

But you wouldn’t be putting out the watts you do, if you weren’t tall and heavy…..

Well the good news for you is that lighter riders have to output a higher w/kg to go at the same speed as you.

Be more interesting to see if there are differences in acceleration…

Or deceleration i.e if were to use a powerup leading into the sprint, hitting the start of the sprint at max speed and decelerating (albeit slight) when powerup finishes. Of course this is purely for a sprint time and not placing within a pack with draft dynamics

I’m only 47 kg & 152.4 cm. It’s frustrating to do a social ride that’s <2.5 w/kg. I have to work hard to keep up with the larger folks that put out more watts & speed than me doing same w/kg. I get my ride thrown out. Zwiftpower forced me to move up to category C & my average is 2.6 w/kg but at 47 kg I have to work to stay in the group. Zwiftpower ditched my social ride Monday for no HR monitor & there were others no HR monitor but still placed. They also separated the categories… Read more »

Yes, what we need to know is weight of the beacon. After a while you learn to factor it in when signing up, assuming the beacon is the default male (75kg), and pick lower rated events. Then every once in a while a woman is beacon and it’s all easier! Doing the same event can help as often the same person leads them. Ignore zwiftpower for group rides!? Why can’t zwift insider change their weight and power to reflect normal women in some of these tests. For example – especially for wheel sets – do those heavy disk wheels still… Read more »

I pulled a back muscle once reaching for the laptop mid-sprint. Do it before you start.

Haha, that’s why I use the companion app. And have it right in front of me!

to do a good sprint, you gotta be able to sprint for minimum 400m/ 500m. the reason is, the faster you hit that 300m to go line, the better your sprint will be – even if dying in the last 100, if you can keep rolling the gear albeit 60rpm, your speed will not drop much if at all. its the speed over the 300meters – not the wpg that gets the good time; so activating it 5-7 seconds before the sprint line, and then maintaining is by far better than activating it at the 300 and have it end… Read more »

Thanks! Great tips. But always my fastest sprint times are when I have a leadout (and draft). Would be interesting to see what I can achieve with a TT bike though…

Actually. I have recently had a medical issue and love weight and height doping. I can now stay with my friends and do a couple of group rides. Not possible with my IRL friends. I do not race and Zwift is 100% social ATM.