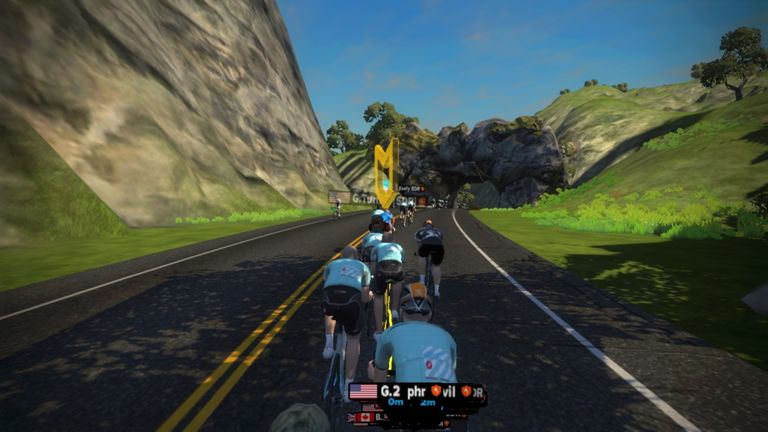 Today closed the books on another great SkillZ and DrillZ and the last one of the year.  Building on last week’s session focused on choosing and working through the proper gearing for the sprint, this week we focused on proper climbing techniques.  We also spent a little more time on selecting a cadence, just to make sure that we don’t blow out our legs.

Here’s a replay of the ride:

Like normal, we started out by working on our group dynamics at a 1.5 watts per kilogram (w/kg) pace.  The focus, like every week, is trying to “feel” the draft.  Unfortunately, Zwift hasn’t figured out the VR technology yet for us to actually feel the difference when we are in a good pocket or bumped out.  So, we have to practice moving around the bunch.

Today, the goal was really to stay in the front third of the pack.  The reasoning behind that positioning is different than IRL riding.  In a live peloton, most of the crashes happen after the front third, as people fight for wheels or have a lapse in concentration.  We try to avoid those at all costs.  Crashes hurt and can be expensive.  Fortunately, Zwift has eliminated that concern (well, maybe, depending on if you saw the GCN visit to Zwift HQ), so we don’t have to worry about crashes disrupting the peloton.  However, you still need to be in the front third to be able to react to any attacks or splits in the field.  One moment of inattentiveness very early on can cost you the race, no matter how strong or prepared you entered the event.

After our warm-up and group dynamics period, we got right into our climbing work.  One of the most important aspects of climbing is gear management.  Too often people choose gears that make no sense, way too low or way too high.  Fortunately, way too low or easy of a gear often takes care of itself quickly.  With too little resistance due to gearing the bike will naturally slow due to gravity to a point where cadence will even out.  Of course it is a waste of time and energy, but the problem solves itself.  Other than highlighting that a rider’s ability to respond is compromised by pedaling too light of a gear at too high of a cadence, there is not much more about which we can discuss.  The harder gears, however, serve a purpose on the climbs but can also lead to problems.

The first thing we did was drop into a gear that allowed for 60-65 RPMs at 1.5 w/kg.  I chose that range for a few very specific reasons, all of which we would experience during the ride.  First off, that is the lower end of the cadence range where I have found cyclists to be able to maintain efficiency and a good position.  Any lower, most cyclists tend to start rocking their hips, and sometimes the whole body, from side to side to compensate for the extra load.  That can lead to bio-mechanical issues as you change the angles in which you apply power which can lead to knee, hip, and back pain down the road.

Do we all rock back and forth from time to time during a hard part of the race?  Sure.  But, many triathletes also pee themselves rather than stop on the bike, and you don’t see them doing that in training or in daily life.  Well, at least I hope you don’t.  The point is that we shouldn’t practice or emulate the bad form that sometimes happens during the throes of a really hard race after hours of fatigue have eroded our mind’s ability to control our body.  So, I think everyone gets the point.  Don’t ride too low of a cadence to avoid unnecessarily risking injury, and do stop to use the bathroom during training rather than peeing on yourself.

As we moved through the first 30 minutes of the ride, we maintained the lower RPMs to make even the flat roads feel like we were going uphill. ( I’m not going to lie.  There was a bit of fun in the torture for me.)  Anyway, we then got to the nitty gritty of climbing.  Do we stay seated, or do we stand?  Ah, that is the question for the ages.  In general, I recommend staying seated and climbing at a tolerable cadence between 75 and 90 RPMs trying to maintain steady power.  If you need to stretch or plan on attacking, then get out of the saddle.  Climbing out of the saddle can be very taxing and is not the most efficient way to get up the road.  As Dr. Haskell pointed out, “But I have seen Contador at the tour out of the saddle and dancing on the pedals!”  That is true.  I have also seen Lebron James jump over a grown man and slam a ball through a hoop.  I can’t do that.  In fact, I probably couldn’t do that with a trampoline.  So, why would I think that I can do the same thing as Alberto Contador? 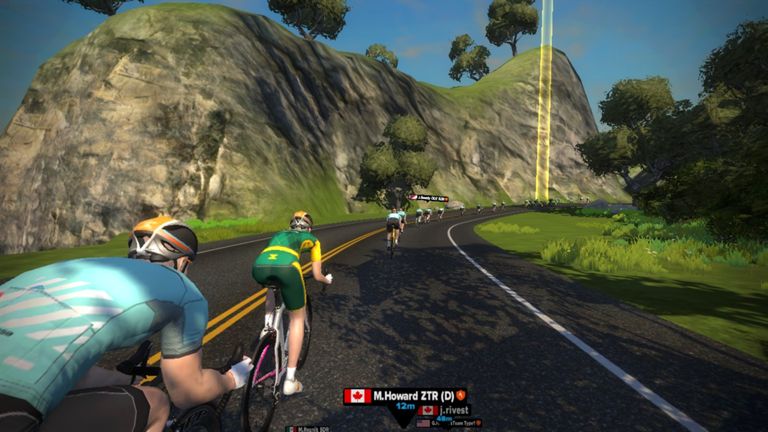 To demonstrate the effort of standing climbing, we shifted up a few gears, raising out of the saddle at about 75 RPMs, still holding 1.5-2.0 w/kg.  Despite the fact that we really weren’t putting out much more effort, virtually everyone’s heart rate shot up ten beats per minute.  That’s because it takes more energy to hold yourself up and balance while riding out of the saddle.  All of that being said, accelerating and attacking while out of the saddle can be very effective.  As we came up to the ramp heading out of the tunnels, I instructed everyone to rise out of the saddle and begin accelerating up the short climb.  That very short climb combined with the accelerations blew the group to bits, forcing us to spend the next two kilometers trying to regroup.  Everyone paid a price, though.  To a rider, everyone was out of breath.  That very short stretch of road, less than 400 meters, took a match from everybody and multiple matches from a number of folks.  Now, that effort hurt, but were it done on a short climb at a tactically significant point in the race, a rider could bridge a gap or jump away from a group with that kind of savage effort.  So, it’s not that climbing while standing is something we shouldn’t do.  It’s just more like one of the “dark arts” that we really need to understand before we put it into play.

Through the Esses, we practiced more repeated efforts out of the saddle.  During any upticks in the slope, we got out of the saddle, and we sat back down for any flats or downhills.  The repeated jumps showed both how much an advantage you can get but also the high cost of doing so.  On our last lap, we executed a different drill coming up the ramp out of the tunnel.  Whereas we sprinted up the ramp, standing, on lap two, this time we went at it seated.  However, I made everyone get to the lower end of our RPM spectrum, as close to 60 RPMs as possible at the base of the climb.  When we hit the base of the ramp, I instructed everyone to start speeding up, trying to bring the RPMs up to 85 RPMs only by increasing power to the pedals, no shifting of gears.  That was a struggle.  It was a great way to highlight the inability of a rider pedaling at low cadences to respond to any change in the race.  On the previous lap, we hit the base of the ramp at higher RPMs and were able to motor up it much quicker and with a sharp acceleration.  From a seated position with low starting RPMs, we showed that the likelihood of being gapped was pretty significant.  Moving on toward the Esses, we did that same drill as on the previous lap, but I encouraged everyone to keep a steady effort through the switchbacks and the Esses.  Yes, there would be a higher power output while standing due to the added pressure of bodyweight, but the idea was to control the body to avoid wild power or effort swings, needlessly throwing the body into the red zone.  Almost everyone rode the last climb much better.

After that, it was a quick cool-down and review of the day’s materials.  It is important to remember that climbing is as much of a skill as any other part of cycling.  Yes, lighter riders don’t suffer as much from the effects of gravity as the bigger folks, but smart riding and sound tactics can tilt the odds back in your favor.  Like we have talked about during the previous few weeks, it’s all about riding smarter, not harder, than your opponents.  Sure, on a straight-up drag race with all things being equal, the lighter rider will win a climb almost every time.  However, if you practice your gearing and know for how long you can ride hard out of the saddle, you may be able to surprise the climbers and steal a victory from them.

SkillZ and DrillZ will be off next week due to holiday travels, but we will be back on 4 January with another addition.  We hope to se see you there, and as always, Ride On!