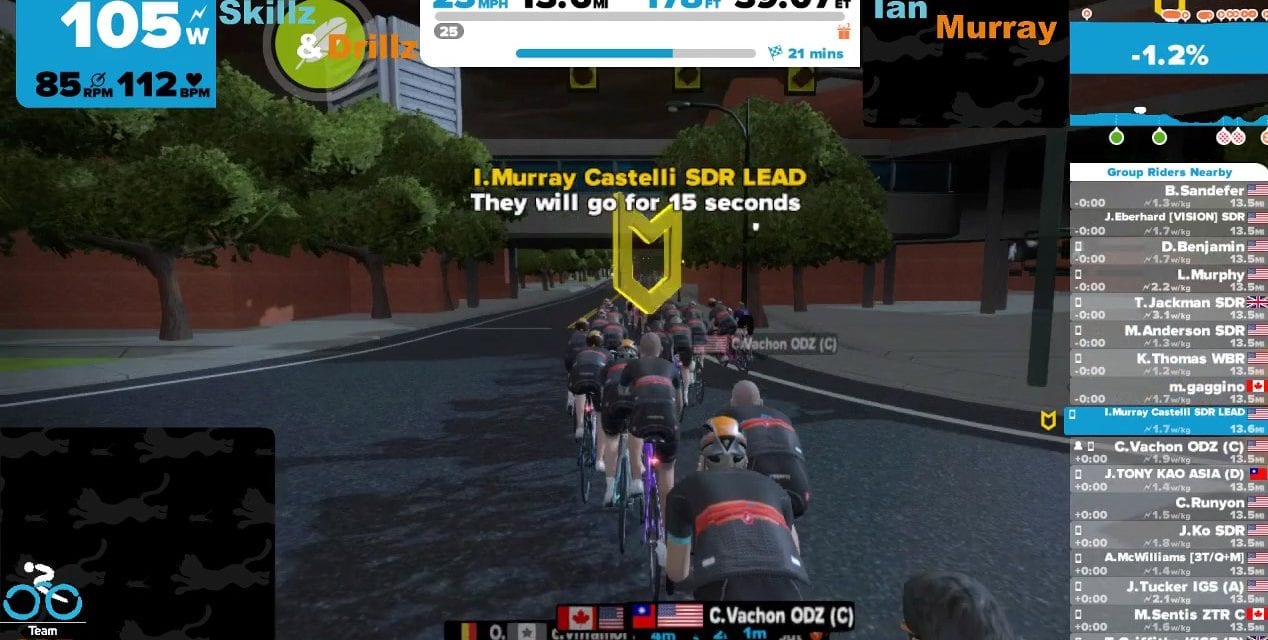 Wow, what a ride.  A little over 70 riders joined us for today’s SDR, with a good portion of them jumping on Discord.  It made for an entertaining evening rather than just a bit of suffering while sprinting.  As a quick caveat, our sprinting class today was focused on sprinting to beat an opponent not to get a green jersey from taking a Zwift banner.  The two do not necessarily correlate.

Like usual, we left the pen at 1.5 watts per kilogram with the goal of staying bunched up to practice working in the draft.  We strung out a little more than usual, as many of the newcomers were still learning the format of the SDR.  After a few minutes of riding the streets of Richmond, we were able to get the group more-or-less together, and I proceeded to go through the focus of today’s ride, mastering the sprint.  Now, we covered sprinting a few weeks earlier, but the focus of that class was really just about timing.  Today, I elected to target the actual mechanics of sprinting from the point of gear management.  Too often, people start in too big of a gear, making the “wind-up” a slow, inefficient process, or start in too small of a gear, leading to a premature spin-out.  Neither are optimal, and can lead to a disappointing finish.

For our first iteration, I talked through the concept and directed everyone to get in a fairly easy gear, pushing 80 RPMs +/-.  The point of the first iteration was not to have a great sprint, but to work through the gears in a methodical fashion.  The concept we would use is the “rev and shift” concept.  Basically, the rider “revs” the gear, raising the cadence to low-to-mid 90s, shifting to a harder gear, and repeating.  We did this through three shifts.  I explained that realistically a sprint with a lead-out would only allow you to have one or possibly two shifts, but it is just as likely to not have any shifts if the lead-out train did its job.  The real point of the exercise was to demonstrate a method of gear utilization that can help set up a strong sprint.

Going into a little depth of gear choice, that sweet spot of the low-to-mid 80s cadence while putting out a good effort, allows enough resistance to create a burst while not spinning out too quick.  Trying to open a sprint with a bigger (think smaller cog on the rear cassette) gear and a lower cadence may allow for a higher starting power, but the rider’s ability to quickly increase that power relative to other riders is likely going to be low.  Think of it like a diesel engine in a tractor trailer.  Sure, it can hit high speeds like your Honda Civic, but it takes significantly longer to get to those speeds.  Likewise, pedaling at a higher cadence is not conducive to an effective sprint.  Yes, you will be able to respond quicker, but gear management will become an issue.  Due to the lighter resistance, it is not likely that the rider will be able to get out of the saddle and put max pressure into the pedals right away.  Instead, the rider will have to make two or three rapid shifts while keeping tension on the pedals, increasing the chance of a dropped chain.  Additionally, power output and power transfer efficiency tends to be lower at higher RPMs than at RPMs in the 80s to low 90s.

We did a few of these iterations, going through the one or two shifts at higher power outputs and at a much faster pace.  Once everyone had the concept, we moved to sprinting from out of the saddle vs from a seated position.  I explained that you could do either, but sprinting from out of the saddle would allow for a higher power output.  It does have a big downside, though: you can’t sprint from an out of saddle position for a very long time.  Thus, you better time it right, or you run the risk of getting overtaken just before the line.  Like from the seated position, we did a similar drill, but using harder gears.  Ideally, you will only have one shift while standing, as you only have about 15 seconds of sprint time before your legs give out.  So, I usually make my shift at the end of my “wind-up” or a few seconds into the sprint to keep the build going.  This point led in to a good discussion about the time to reach peak power and the time one can hold it.  Since I don’t have physiological data on every Zwift rider, in general I would put forth that most riders should get to their peak sprint power within five seconds and should try to hold it for an additional five seconds.  Any longer than that is gravy in my book.

After finishing up with the different sprinting styles, we played a few games, including Match Sprint, Lead Out, and Max Power.  Match Sprint is simply a one-on-one sprint.  Because not everyone was on Discord, I couldn’t do complete pairings, but we selected a few riders as the designated opponents who would initiate the sprint.  Everyone else had to pick which rider he/she wanted to sprint against and get positioned to respond.  Think of Match Sprint like the sprint event on the track or the final kilometer of a road race when the breakaway riders are trying to time the sprint and almost come to a standstill.  I will have to say that it was a challenge to execute, but we did a few iterations of it.  By the final one, it went rather well.  The initiators launched at various times, meaning that the sprints varied from 100 to 400 meters, just like in real life.  Following Match Sprint, we switched to Lead Out.

Lead Out is just how it sounds.  Riders partnered up, with one partner as the lead-out and the other as the sprinter.  The lead-out rider performed the “wind-up,” and the sprinter did his/her thing.  Now, I’ve mentioned the “wind-up” a couple of times but never explained it.  The “wind-up” is simple.  Riders in front of the sprinter progressively lift the pace, going faster and faster, until they are spent, leaving the sprinter left to finish the job.  The point is to allow the sprinter to launch from a higher speed without having to expend the copious amounts of energy to get to those speeds.  Physics laws state that accelerating a body is the greatest expenditure of energy, therefore using a team to make the sprinter’s acceleration easier means that he/she will have more energy for the final burst.  If the sprinter has to burn off the matches in the book just to get to the launch point, nothing will remain in the tank.  Thus, during the Lead Out game, we had one partner serve as the final rider in the sprint train, also known as the “lead-out” rider.  It allowed the sprinters to go faster at the same power output.  To see this in action, check out the video below at the 2:46:20 mark.  You will see how Justin Wagner used his lead-out men effectively to set a best time for the sprint during the Zwift Team Worlds race.

Lastly, we played the Max Power game.  Again, it’s just like it sounds.  We went for 5-second power, one at a time.  Most people did a pretty strong ramp-up or “rev,” and quite a few people broke 10 w/kg.  It was not a scientific study by any stretch of the imagination, but it was fun just to see what we could individually do.  Once we finished up with our individual effort, we did one more iteration but at much higher RPMs just to show the ineffectiveness of that technique.  Within a few seconds, everyone quickly got that, as there were many complaints of being sloppy and bouncy.  Exactly.  That’s why we don’t do that.  Anyway, we wrapped up at that point with a couple of minutes of cool-down spinning and reviewing today’s lesson.

Thanks to all who joined in, and I look forward to the next SDR where we will go over climbing techniques in a very controlled environment.