I Ran Every Inch of Watopia 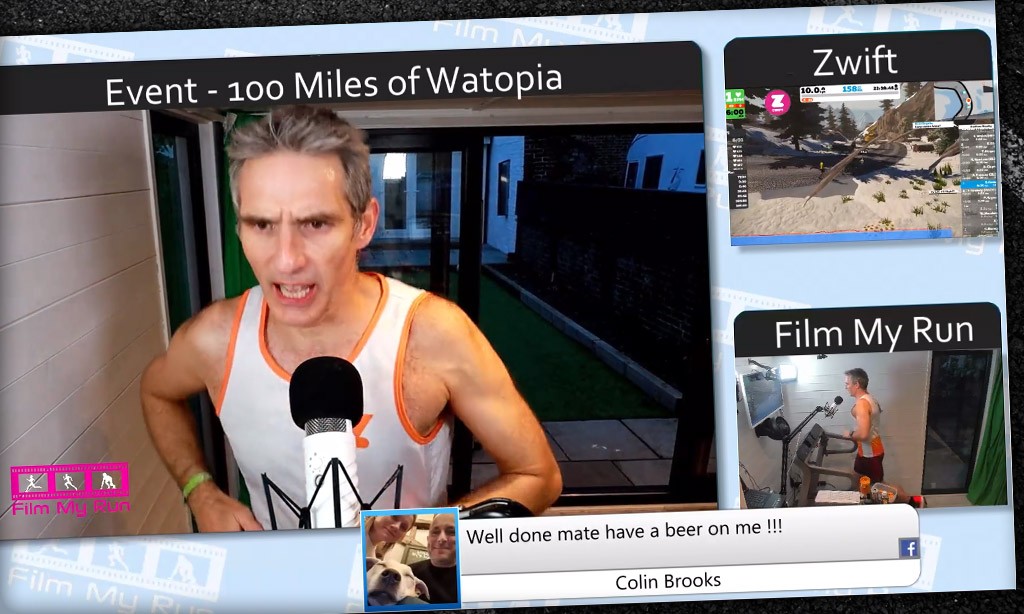 The global crisis has meant the halt of organised sporting events around the world. Whilst this has been regarded as restricting by many, for some it has provided an opportunity to do something different.

I run a lot on Zwift. I am lucky enough to have a treadmill at home and can log on and run whenever I feel the urge. I started running when the first pre-beta version was released in December 2016 and I have now covered some 4000km on Zwift on foot.

I call myself an ultra runner. We are an introverted bunch of loners, prone to spending hours on solitary trails running mile after mile for no sensible reason. The 100-mile distance is my favourite. I have completed a few of them outdoors, but I had not attempted one on a treadmill before.

Given that all my real world races have been cancelled, I saw an opportunity to do something I have been considering for some time. It was now or never.

My plan was to run 100 miles on the treadmill in one session, ideally in under 24 hours. As an added incentive, I thought it would be awesome to try and run every inch of Watopia. Every road, path, track and trail. (This is something no rider could ever do on Zwift because there are certain ‘run only’ routes in Watopia.)

I was also fairly sure that no other runner had done this, which would make it a nice ‘first’ to add to my ‘first marathon’ and ‘first to ride 500km’ landmarks on the platform.

I am a regular live streamer, covering most of the major running events on Zwift, either as a participant or commentator. Obviously, I had to stream the attempt, but it would be, without question, the longest live stream I had ever undertaken.

I use two separate computers. One runs vMix streaming software and the other runs the game. This was to become significant as the hours ticked by.

I recall running a marathon on Zwift in 2018 with the goal of getting the newly available 26.2 Achievement badge. I was at mile 25 when my computer froze. I couldn’t complete the run and didn’t get my badge until a year later.

Most real world ultra races start in the morning. There are some which start late at night and in some ways it can be good to get the lonely, night section over with early on. However, the downside to this is, by starting late you have been awake all day and you are starting the run already somewhat fatigued.

I decided to start at 8pm for no reason other than it is prime time for live stream viewers, meaning I could start the attempt with at least some people watching and hopefully finish in a similar way 24 hours later.

Dressed in my Zwift-branded singlet, I set off at the sedate pace of 7kph. The average pace needed to complete 100 miles in 24 hours in 6.7kph. This doesn’t include breaks or slowing down for hill climbs of course, so I needed to move slightly faster.

I rarely use the incline on my treadmill for everyday Zwift running. The nature of Watopia’s elevation profile is such that, to match the grade, you have to manually alter the treadmill incline every few seconds. It’s monumentally tedious.

As Zwift have yet to implement automatic incline control for smart treadmills, most runners keep their treadmills flat. However, for this 100-mile attempt, I thought, if I am going to cover all of Watopia’s roads, then I should make an attempt to match the elevation profile too.

My compromise was to try to average out gradients as I went. There are three significant climbs; Alpe du Zwift, the Volcano, and the Epic KOM. Rather than alter the incline on my machine, I would set the gradient at an average and leave it there for the duration of each climb.

The longest route on Watopia is the Uber Pretzel. It is approximately 79 miles long and covers almost every area of our beloved imaginary world. The only sections missing are the run-specific routes and the Titans Grove forest including the Repack Ridge trail.

My plan was to complete the Uber Pretzel and then add the extra sections afterwards. As it was, I noticed that the route goes through the Fuego Flats desert section twice. So I substituted one of these with a diversion to Titans Grove and Repack Ridge.

I was blown away by the support of the Zwift Running community from the get go. Two or three people actually stayed up all night chatting with me on my live stream and runner after runner came out to cover a few kilometres with me.

I often prefer to run alone but I was genuinely spurred on by having people make a special effort to run with me. On one or two occasions we had a group of between five and ten people all running together.

The first 80 kilometres flew by. The night section went by much faster than I had expected. I stopped every hour for a few minutes to refuel, stretch, and wash. Before I knew it, it was 8am, it was daylight and I was halfway done.

I had climbed the Epic KOM at walking pace, run round the Mayan Jungle, up the Volcano, and through Titans Grove including Repack Ridge. I also snuck in a lap of the May Field track.

I was fuelling with a variety of food stuffs including rice pudding and bread. But my main fuel of choice in these early miles was Huel. It’s a powdered meal in a drink, which I mix with full fat milk. So I am getting good fats, protein and slow release carbohydrates.

For fast-acting glycogen I was drinking Red Bull occasionally. But with a heart rate in Zone 2 for most of the run, slow-release carbs generally sufficed.

I had made a decision early on that I wanted my Zwift run to be a single, continuous 161km activity. No point otherwise, I concluded. If my Zwift computer were to crash, as it had done on my 2018 marathon run, I would be giving up and going to bed.

As it was, I did in fact have two computer crashes during the run. Thankfully they were on my streaming computer which must have overheated. It turned itself off with no warning, twice. This is why my YouTube record of the event is split across three separate videos.

I was dragged to the 100km point through the desert by a solid group of runners. This was the point at which it felt like there was a very long way still to go and I was feeling very tired. There will always be low points in a run and this was mine.

However, my mind was distracted by a comedy half an hour on the Ocean Boulevard Run Path a little later.

I had decided to complete everything around Downtown before heading out to finish the Uber Pretzel route at Alpe du Zwift. There is a section on the path with four slip roads at a crossroad. I wasted a long time doing u-turns to try and run on each of these slip roads in my quest to cover every inch of Watopia! I lost count of how many times I u-turned in the wrong direction, or missed the path I was trying to get to.

Eventually, all that was left was the long run from Downtown, out to the Jungle and on to climb Alpe du Zwift.

By now, having run some 140km, I was almost done for. I had nothing left and I was dreading the climb. I was also running out of time to make it in under 24 hours.

I made the executive decision to reduce the climb gradient on the Alpe to something more manageable. Rather than the average of 8.5%, I climbed the Alpe at walking pace with a treadmill incline of 4.5%.

I was humbled to have been joined by a good number of runners on leaving Downtown, who stayed with me for the rest of the run. I apologised profusely to them for how slowly I was now running and how long it was going to take us to climb the Alpe. But, on we went.

It was a long, slow, painful march to the top, but once there, with just 10km left to run, I was filled with relief and with absolute confidence that I had done it.

Downhill to the Finish

Even though I was running flat on the treadmill, the psychological boost I felt from reaching the top of the Alpe and now running virtually downhill made me want to run faster.

The last 10km of my 100 miles of Watopia were the fastest of the entire run, and the last kilometre was the fastest of all. If I had planned my route better, I would have finished in a blaze of glory on the track. As it was I finished at the foot of the Alpe du Zwift after 24 hours and 25 minutes of running.

I missed my 24-hour target, but I had completed 100 miles on a treadmill on Zwift and in the process became the only person, rider or runner, to have covered every road, path, track, and trail of Watopia.

I climbed 2200 metres of elevation, which is not far off the expected elevation for that route, and received 564 Ride Ons whilst burning approximately 7363 calories.

What is it that motivates a person, not only to run 100 miles, but to want to do it on a treadmill? There were times when I wanted to stop. There always are in a run of that distance and duration. But at no time did I actually consider stopping.

Don’t get me wrong, I have stopped before in races. You may have heard it said that 90% of an ultra distance run is about mental stamina and the other 10% is in your head.

Of course, physical training and appropriate fueling play a big part. But at some point you have to find it in yourself to get to the end. You have to be able to go to a very dark place and come out the other side.

Running 100 miles is hard work. Running 100 miles on a treadmill arguably demands another level of grit and determination. I did it because I wanted the challenge. Part of me enjoys the suffering. I crave the satisfaction of completion. I love the feeling of overcoming the low points. I won’t be doing it again in a hurry. But I will do it again. 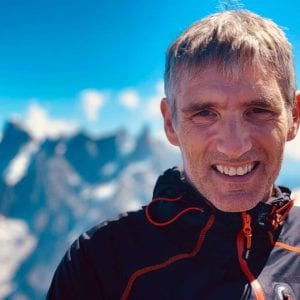 Stephen is a Community Leader, Live Streamer, blog writer and content creator for Zwift. He has been using the platform since March 2015 and was the first to cycle 500km and the first to run a marathon on Zwift. IRL he has run well in excess of 100 marathons and ultras. Follow him on Strava >

Awesome job! Watched a good deal of the effort, both before I went to bed and then after waking up (crazy for me to comprehend), and was truly inspired! Have been increasing my Zwift single run mileage further than ever before for me because it was motivating watching you push through this effort!

Was great running with you. You definitely dropped me like a hot potato when you sprinted that last kilometer.

My utmost respect for this superhuman achievement. Zwift cannot wish for a better ambassador!

WHOAH, crazy! Hats off. I’m glad my back surgeon told me to never run again. Do you change shoes or socks on an adventure of this caliber?

Wow! What an accomplishment! I am so awed by ultra marathoners. I am glad that the computer did not crash and you were able to finish.