How the Race Was Lost: Improving My ZwiftPower Ranking… by Losing! 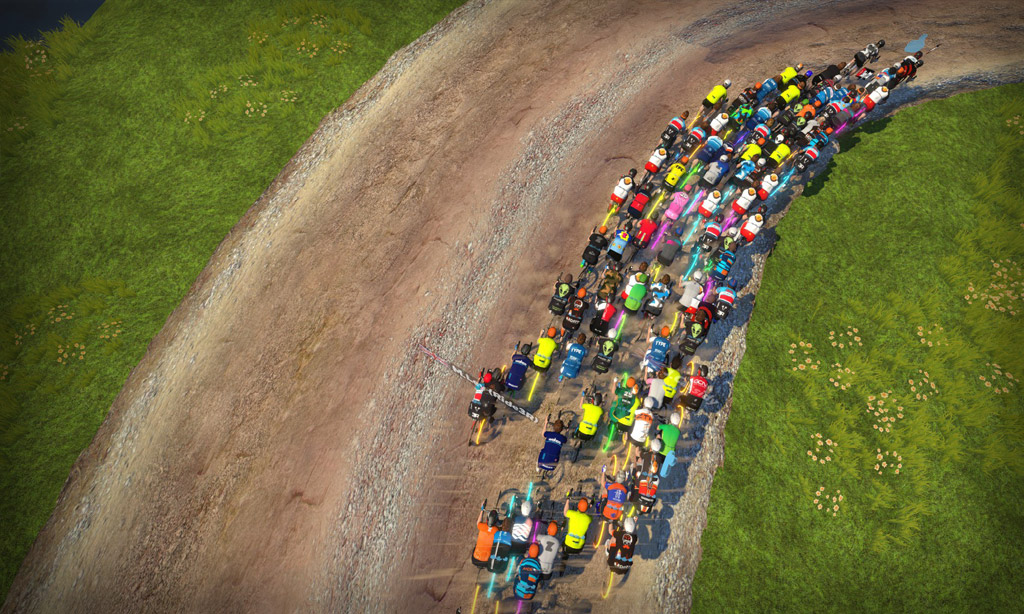 Yesterday’s 3R Sundown Race Series event was packed, with nearly 160 B riders. I don’t know about you, but whenever I see a field of that size, a podium finish feels nearly impossible! Yet I still enjoy jumping into bigger races, because I know I’ll have to push myself to the limit for a good result.

And that’s exactly what happened in this race. I pushed hard. I didn’t podium. But I did get a victory or two, in some sense…

Today’s ride plan was a bit different than most of my race days. In an effort to get a bit more training time in, I decided to do an early easy ride (zone 1/2 for an hour), then work in the office for a few hours before jumping on the bike for the race.

Just before the race I went through my typical warmup ritual: two pieces of caffeine gum and some PR lotion on the legs. (I also tried a new product I’m experimenting with, but I’m not ready to talk about it yet…)

This would be the largest group of Bs I’d raced in recent memory – 158 of us in the start pens! (Just a sign of things to come I’m sure, as we head into peak Zwift season and big races like the Zwift Racing League are spun up.)

We were racing on the Seaside Sprint Circuit, which meant the race would start with a quick climb followed by The Esses. So many riders get dropped in these sections! I made sure I was well warmed up, then just tried to stay in the front half of the blob. This required a solid VO2 effort as usual, but we didn’t have any zPower rangers on the front so the pace was realistic. 334W for 3-1/2 minutes kept me in the front group which was reduced down to ~90 riders by the time we rode through the sprint banner and began the first lap.

Despite a complete lack of planning, I was happy to discover a solid group of DIRT teammates in this race. At least 6 of us were still in the front group, and most of us were on Discord so we could chat a bit as we rode. There were definitely some teams working together in this race, including Team Type 1, CYRO-Gen, WTRL, and most noticeably ZSUN.

The ZSUN crew were near the front of the pack for most of the race, pushing the pace. A couple even attacked halfway through, but with 70+ riders still in the blob, nobody felt the need to chase them back as we knew it would come back naturally.

For my part, I just tried to stay out of the virtual wind (a few bike lengths from the front) so I could respond to any big attacks and not risk getting caught out if gaps opened up. I could feel that the pace was high, but that wasn’t surprising given the large group size.

In my experience, group size affects Zwift races differently than outdoor races due to differences in drafting and pack dynamics:

At one point some riders pinned it at the front through the Esses, stretching the group out – but bumping up the power while surfing the wheels brought everything back together soon enough.

I really felt I was holding my own… until the final minutes of this race. The Seaside Sprint Circuit route ends at Watopia’s reverse sprint banner, which means the lead-in to the finish is super hairy! First you’ve got The Esses, which are just an attention-demanding roller coaster. Then you’ve got a quick kicker of a climb, followed by a straight ramp down into a sharp left onto the bridge for the final sprint.

Everything ramped up once we hit The Esses. Then it ramped up more heading into the kicker, because everyone wanted to be near the front for that short climb. And there was no easing once we crested the kicker, because riders were sprinting over the top! By the time we hit the bottom of the descent for the final 10s sprint I knew the podium wasn’t within reach. I was out of the saddle sprinting with all I had – but it wasn’t much. Strength sapped from the previous minute, I was pedaling squares in some pathetic imitation of Primož Roglič’s recent disastrous TdF TT climb.

I ended up averaging 395W for the final 2 minutes of the race, and 470W for the final 1 minute. I finished 18th in the on-screen results, but 16th in ZwiftPower. One of my worst race results in recent memory… or was it? (See “Takeaways” below…)

I think it’s important to focus on the positive… in bike racing, and all of life! Any time I lose I race, I look at what lessons I can take from it, and I look at what good came from the race. Maybe it’s just that I got a hard workout in and will be stronger for it. Maybe I learned something new that will serve me well in the future. Maybe I helped a teammate succeed! You get the idea.

Here’s an important positive from this race: it actually improved my ZwiftPower ranking much more than any of my recent races, including 5 recent races where I finished in 1st or 2nd place!

How is that possible? Because this was a much higher-quality race than those others. (The stronger the riders in the race, the higher its quality. Learn more about race quality here.)

Since I finished ahead of several riders ranked higher than me, my ranking received a solid boost of 12.29 points thanks to my 16th place finish. This moved me from approximately 425th place overall in the Bs to 300th place. Not a bad jump!

The lesson here is: a race loss can still be a big ranking win.

I was also happy to see a good power curve on this ride. Here’s what Strava shows me – the dark purple line was this race, and the light purple is for the past 6 weeks. Lots of new PBs in the 3 minutes+ range!

Do you pay much attention to ZwiftPower rankings? What sort of “wins” do you focus on when you lose? Share below!

I was in this race too! And whilst finishing somewhere in the middle after getting dropped on lap 3, I took a lot away! Firstly how it’s easy to lose the wheel in the dirt when you can’t see the riders ahead. Secondly, how the race in the grupetto can be fun too when the stragglers sprint it out for the lower places. Lastly, how fun it was to mix it with some higher ranking riders, always knew the pace was going to be tough when there were that many there but makes it a great workout!

Oh yeah – getting left in the dust is a rite of passage for all Zwift racers. GCN’s Simon even lost his first big Zwift race that way (https://zwiftinsider.com/gcn-si-volcano/)

Mixing it up with stronger riders is how we push ourselves to get stronger. It’s motivating, even while it’s butt-kicking!

I did the same event later in the day (recording is available on my twitch channel tim_hanson_ but i cant seem to link it here) and it went much the same as yours. It was really fun to mix it up with such a big group of Bs and, like you, I missed the podium but had my best zwift power result ever.

I should join the DIRT discord more often. In-race team tactics sounds like a blast.

Having said that, I admit that I pay little attention to it, but my teammates and club directors sure do, and if it makes them happy, it’s wonderful.

This series (and in particular this time zone) have attracted a very strong sign up list every week. Next week’s edition, involving three laps of Innsbruckring and then finishing up the Innsbruck KOM, will really blow up the GC standings.

Ouch. I think I’ll sit that one out. Innsbruck KOM is a monster!

I am not looking forward to the Innsbruck KOM. Time to lose 2 min in GC!

Where do you find these GC standings?

I’ve tried to enable the columns for “Rank Before” and “Rank for Event” (I’m looking at my Women’s Empowerment for yesterday at 10a PT), but they won’t toggle nor do they appear. What am I missing?

Try clicking the text next to the checkbox, and not the box itself. Kinda weird, but works for me.

Eric, I have to say this is one of my favorite series to read. It’s just fun to see how the race unfolds but also you trying different tactics depending on the field and course. I also went to Zwiftpower and we have eerily similar power numbers for w/kg.Hoping one day to ‘see’ you in a race. I recently had a few bad weeks, but these articles make me get back on the bike! Thanks.

I wanted to add on per ‘your comments’ section. Since I moved up to the Bs (granted this is my first year zwifting) and am now able to stay with the pack, I do follow the rankings. Prior to races I use my white board and write the top couple of guys. I star who has really good 15 sec power for flat races or 5-20 min power for climbs. If I see a guy too far back during the race who is ranked high, I will try and attack in order to drop them. I sometimes go for the… Read more »

Glad the articles inspire you a bit, Trevor! Hope to see ya soon.

I like your approach to writing down top contenders. Racing smart makes a difference.

It’s based on the USAC system… so it’s not like they reinvented the wheel or anything. But it is complex to wrap your head around! I need to do a post explaining it…

Nice writeup! Always fun to grab a large race rank improvement. I won the A cat of this race though without the rank improvement. It is nice to not have the A+ riders in the A cat! This is certainly one of the trickier finishes on Zwift. You have to stay in good position through the esses, stay close enough to the front over the top of the hill to be in striking distance and start your sprint before the bottom of the hill. That way you have enough virtual speed on the bridge to pass anyone who went too… Read more »

Man…. mad watts/kg on that final sprint! You made it look easy.

Very interesting read, thank you for sharing! I really enjoy reading about all the strategic planning. Sorry if the following is a really stupid question that I should have been able to answer myself. I finally started to look a little closer at all the ZwiftPower stuff but honestly still don’t really understand what all the numbers mean and how they are relevant to me. For the last race I did (Virtual Haute Route Stage 3) my profile shows the following numbers: Before: 378.xx Result: 183.xx Gain: 83.xx So I assume the gain is something pretty good, just based on… Read more »