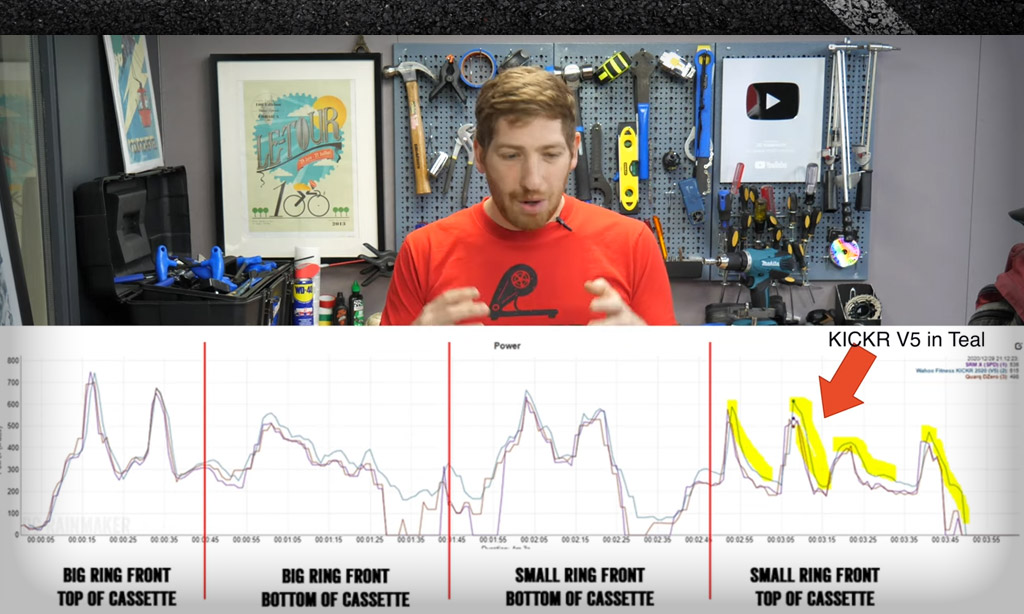 This issue was mentioned in initial reviews by Shane Miller (GPLama) and DC Rainmaker, and although it’s a bit of an “edge case”, the power inaccuracies definitely caused concern, especially since the new KICKR was touted as being Wahoo’s most accurate KICKR yet.

What was the issue exactly? The KICKR, like most quality trainers, uses a flywheel to mimic IRL inertia. When that flywheel was moving very slowly, power would be overstated.

The majority of KICKR would probably never be affected by this inaccuracy, as it only occurred when flywheel speeds were very low – think riding in your small ring in front, and one of your easiest gears in back. (This is a rare thing on Zwift, given that most people ride around 50% or lower trainer difficulty and don’t do ERG workouts in super-easy gears.)

But if you were climbing a steep hill at 100% trainer difficulty, or doing ERG workouts in your small front ring and near the top of your cassette, your power was definitely overshooting on the old KICKR v5 firmware.

DC Rainmaker has put together a nice video comparing accuracy between the old and new firmware. See it below, and be sure to update your KICKR v5 firmware via the app!

UPDATE Jan 1, 2021: Looking to purchase the KICKR v5?
They’re in stock right now at Wahoo, for the first time in weeks!
Get it here >

Any news if this issue impacts older Kickr?

I think I’ll wait a few days to see if this firmware update came with any gremlins. I’ve had enough problems with my Kickrs in the past; I’d hate for a firmware update to get the one I have now acting all wonky.

Appears that this is for the trainers, and not the Kicker Bike. Correct?

Wondering how many non pro cyclists actually own a Kickr5. I have an 18 but wanted another trainer so my wife and I could ride together, Wahoo is not very forthcoming as to when Kickrs will be next available to us non pros and non social media “influencers” so I bought a Tacx Neo2t as our second.

Thousands of non pros have the KICKR5. It’s been a little hard to get, but not impossible. Been in stock at various retailers for the past several days. Currently in stock at Clever Training: https://click.linksynergy.com/deeplink?id=TsvmSDpSQi8&mid=43627&murl=https%3A%2F%2Fwww.clevertraining.com%2Fwahoo-kickr-smart-trainer

I’ve noticed in races I’m now down roughly 40 watts after the update on a Wahoo kickr core 2019, I just can’t hold the power I used to hold. joined Zwift November 2020 and racing since then W/K also well down. So now Im thinking was I over powered all that time or what ?