Wahoo Announces the Most Accurate and Comfortable KICKR Yet 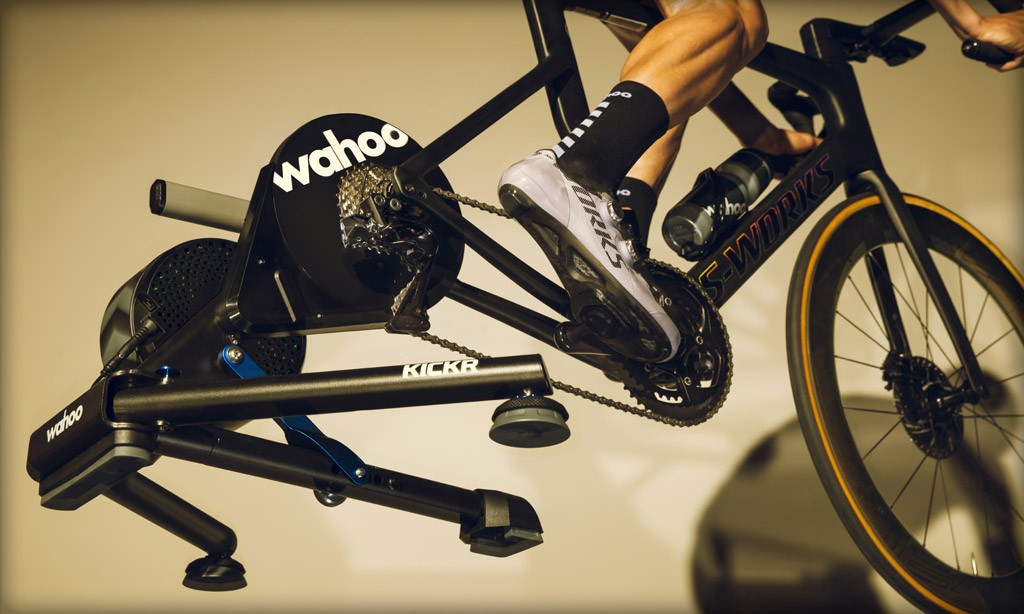 Wahoo’s KICKR is the most popular direct-drive smart trainer on the planet, and for good reason: its road feel is second to none, the build is bombproof, and Wahoo stands behind their products with top-notch support. (Then again, I’m a bit biased: I’ve logged over ~22,000 Zwift miles on a KICKR trainer!)

Wahoo’s press release for the new KICKR states that it “refines power accuracy to +/-1% from +/-2% by using a proprietary auto-calibration process.” So it doesn’t appear that any power sensing hardware has changed – rather, Wahoo has integrated an auto-calibration which improves the overall power accuracy. Fair enough. Zwifters don’t care how it’s done – we just want accurate power! And having it without the need to manually calibrate is even better.

The KICKR’s #1 competition is the Tacx Neo 2T, which has always demanded a higher price tag because it claims +/-1% power accuracy without needing calibration. With this update, Wahoo’s KICKR now offers the same industry-leading accuracy and calibration-free experience at a price tag that is $200USD below the Neo.

Many Zwifters praise the Neo’s ability to allow for a bit of rocking from side to side, and the new KICKR addresses this as well with its new AXIS feet. Wahoo says:

These feet allow a bike installed onto the trainer to smoothly tilt up to 5 degrees from side-to-side with each pedal stroke in a controlled, realistic motion.

Three stiffness options let you tune movement to your unique riding style, and the AXIS feet can be purchased as an aftermarket replacement for older KICKR models.

As a big fan of rocker plates, I support more movement! I’ve got a review KICKR arriving in ~10 days, which will replace my KICKR 18 on several weeks of Zwift sessions so I can put the new feet through their paces.

Wahoo isn’t mentioning it in their marketing, but the new KICKR includes a direct connect wired option – an RJ11 port (aka, telephone jack port). There are no devices or apps which work with that port… yet. But this looks to be the first move toward a wired setup which Zwifters have been requesting for years!

Zwift would need to implement the software changes, while Wahoo would need to release the wire dongle which converts from the RJ11 port to a network plug, so you can plug your KICKR directly into your ethernet. Will it happen? I’d say chances are good, but it may take a while.

Here’s a quick walk down memory lane to look at what each new KICKR model brought us:

This latest KICKR is far from a major revamp – but why should it be? The KICKR name is proven, profitable, and trusted worldwide. It makes sense for Wahoo to continue iterating on this already-refined platform, finding ways to match or surpass the competition so they can maintain their position as industry leader.

And that’s only good news for us consumers. If the new KICKR lives up to its accuracy claims, it will force Tacx to reduce its Neo pricing, or improve the product significantly!

The new KICKR is available today at wahoofitness.com for the same price as previous generations: $1199USD. (Pro tip: make your purchase through this link and you’ll help support the Zwift Insider site!)

I’ll update this post with links to additional distributors once I’ve confirmed they are shipping the new KICKR.

I’ll publish an initial review after using the V5 KICKR for a few weeks. Stay tuned! Until then, DC Rainmaker’s review has just been published.

Interesting! Owner of a V4 (KICKR’18), I wonder if the Axis feet will be available for a retro-fit?

Yes, they’ll be $79 but the DC Rainmaker review notes that they make little difference, particularly if you already have a mat.

Joel
Reply to  Will

🤖 That’s a bummer…An DCR has always been spot on!

I don’t understand the hype over the feet. Nothing of note tbh. I’ve been using a gen 1 on yoga mats for ages and get the same movement. Their is also a school of thought on zwift that sprint power is actually higher if you don’t have this movement, no idea if it’s true – but it’s not a desirable feature for those people.

I’m with you on Wahoo support. Never had any issues with the Kickr however the Kickr Climb let me down, twice. Both time, I got a replacement (once the power unit, once the Climb unit).

Thanks Eric. I ordered using the above link

Thanks so much, Rob! Enjoy your new KICKR!

Interesting post. The movement option sounds a good feature to have. It should help improve wattage when sprinting. Seems more like an iteration as opposed to huge leap.

Hopefully the reliability will be good out the box. I’m on my 4th kickr v4. Early models had huge reliability problems with excess vibration and noise. The customer service has always been great though with wahoo and I got the replacement units quickly. The last one had been good for the last year so hopefully they have learned and their design is more robust

Does it work with Campagnolo free hub/cassette?

You need to buy the Campagnolo Freehub for it to work – $69.99 from Wahoo: https://www.wahoofitness.com/devices/accessories/campagnolo-freehub-for-kickr-power-trainer?rfsn=1864732.0526a626b

I’ve had my Kickr Gen1 for 6 years and 8 months (bought Jan 2014) and never had a single issue. Have only removed the cap and cleaned the sensor twice. I do have a super minor issue with the base legs creeping forward after a hard sprint. Maybe I’ll try the new adapter feet.

Plugs are sexy! Great to see a wired smart trainer; I could never understand why make something stationary wireless.

My kickr has barley done any work from new, you gonna do me a sweet trade in please?

When power is measured, it’s torque times speed. Speed is fairly easy for a smart trainer (the flywheel is moving quickly, so frequent sampling of rotation speed). So it comes down to torque. This is done by some sort of strain gauge. The strain gauge typically has two calibration parameters: slope and intercept (zero offset). Zero offset is easy — when it’s freewheeling, torque is zero. So do frequent spin-downs and that keeps “zero” close to zero. Typically KICKR has done this when you do a special spin-down test. PowerTap, for example, did it whenever the rider happens to coast,… Read more »

Eric, do you expect it to be an Ethernet connection?

I would have thought a USB port at the other end.

Based on what I’ve heard from Zwift, yes. Also, that’s where DC Rainmaker is leaning…

Ok, thanks. Seems an odd option. RJ11 is stuck at around 20Mbps from memory.

Will be interesting regardless.

I’d be surprised if it was RJ11 to USB, as it would be easier to just use USB for the whole thing. Still think RJ11 is an odd choice. Maybe because it is slightly smaller and less pins to break? As far as data amount, I doubt it is that much. How bandwidth do you need to download resistance and upload wattage and cadence every second? Suspect it is much lower than 20 Mbps.

No spindown is a good move in the right direction for zwift fairness, as long as the auto spindown is reliable and remains accurate.

YES!!! A wired connection!! I’m looking to buy a new trainer in the not-too-distant future, last night my ride got ruined by a disconnection yet again and I said “if someone makes a wired trainer, that’ll be the clinching selling point for me!”

I have gone from a version 1 to the latest and there is no comparison. Smooth silent and more accurate. Now looking forward to getting a climb and having a real nice training setup to improve just that little more.

Very important would be noise level….living in a flat currently my Kickr drives them nuts..