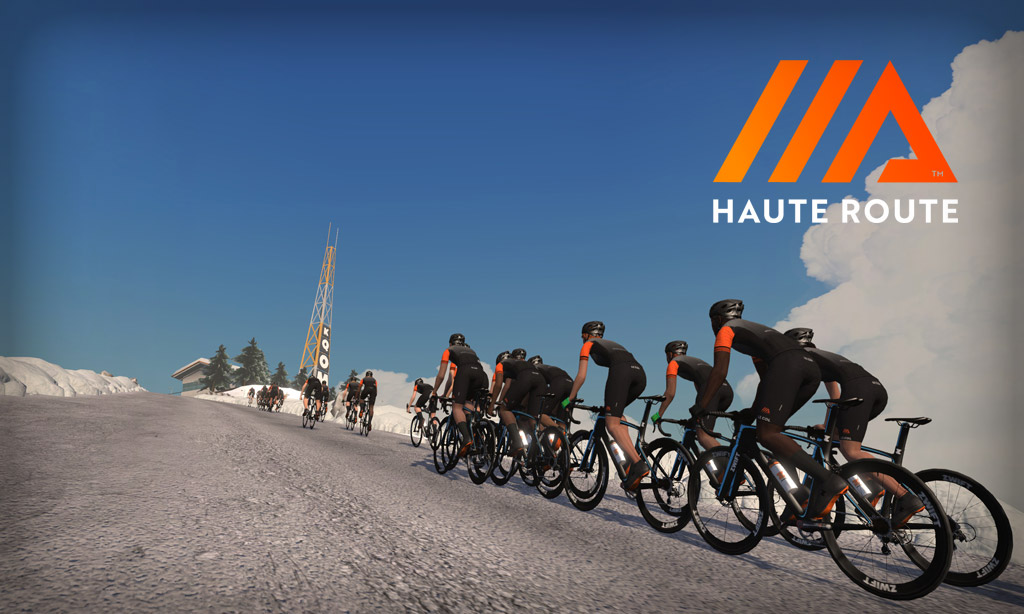 The inaugural Haute Route Watopia in April 2020 was Haute Route’s very first virtual event, and an incredible experience for everyone involved. With almost 70,000 riders joining, Haute Route Watopia 2020 was bigger than anyone could have imagined, prompting Zwift to add more event times and categories at the last minute!

This stage uses a portion of Watopia’s Mega Pretzel route, ending less than halfway through the route, atop the Volcano KOM. The route includes three key climbs:

This stage uses most of Watopia’s The Pretzel route, ending atop the Epic KOM Reverse. It’s the longest stage in terms of distance, and includes four key climbs:

This stage uses the full Quatch Quest Watopia route, which finishes with a climb up Alpe du Zwift! It’s the queen stage thanks to its three climbs:

While riders will be competing for stage wins, the overall win is the big prize. Be sure to register on ZwiftPower before the event so you can take part in the general classification competition across the three stages.

According to Zwift’s marketing for the event, we’ll be riding the Colnago V3Rs in game for the Haute Route Watopia stages – a new bike which isn’t yet available on Zwift! Zwift describes it as a “climbing dream machine”.

Finisher’s Kit and Other Unlock

Looking for direction as you train for Haute Route Watopia? A group workout series begins on Zwift Monday, January 11th.

See/sign up for events in the series >

Complete any one of the group workouts and unlock the Haute Route 3-day jersey.

I think this event will be even bigger this year and without each stage being staggered over several days, I just hope that Zwift get their act together so that we don’t see the complete shambles we’ve seen on Stage one of the TdZ.

With a good setup you dont have strugle with big participant numbers.

And how will that help me? I am not going to move my gaming pc every time I ride on Zwift. That would be 5+ times a week, you crazy?

I personally don’t have any problems with my set up but when you see videos on YouTube (Chris Prichard’s one is a good example) of hundreds of bikes with no riders and constant lag issues it hardly creates an immersive experience and shows Zwift in a bad light. I rode Stage 2 this evening (again with no issues) but the chat was constant in the opening minutes with complaints of riderless bikes and lagging issues.

For the first two stages, if you were to carry on riding = would you get the route badge do you think?

You only get the badge when the route is choosen. You can ride the PRL Full with free ride but you dont get the badge at the end.

That’s not answering the question.

Which, unfortunately I won’t be able to either but what the op is referring to is in events, if it takes place on a route you haven’t finished yet, you get the route badge on completion of the route.

If you start in the appropriate spot for the pretzels, I would imagine you might get the badge if you keep going. If you dont start at the right spot, you won’t.

If an event is on a route, and that route isn’t an event-only route, you’ll get a badge for riding it if you haven’t unlocked that route badge already.

I would think so, since it would be seen as you having picked that route to ride.

There is unlikely to be a GC this year.

I hope they have a ride going off every hour like they did today so that traffic doesn’t crash it with no time for make-up rides. I also wish there were an alternative schedule for those of us in the Middle East where Sunday is a work day.

Is it free if you have zwift sub?

Of course its free

The link for the pretzel route takes you to the mega pretzel. Did the ventoux weekend all three stages and legs were sore some days after. Good pain ahead next month.

Do you have any news on the XTERRA for us yet?

Hi Eric, do you think that the Colnago could be a faster climber than the Tarmac Pro ?
And could it be possible to unlock it in the event without spending hard earned drops ?
And are there some new rumors about the Spec. Aethos ?

Colnago without Campagnolo! The Horror!

Looks awesome, but I’m disappointed that they chose to put this on the weekend BEFORE the final race of ZRL season two.

In the same boat if my team is doing well in ZRL at the point as it is the playoffs at that point. I look forward to these events as it favors the endurance, long climb, and multi-day in row riders than the 1-2hr one day events once a week. All thou I am hoping for new frame for the garage after three days.

Isn’t the first stage going up the Epic KOM Reverse instead of Epic KOM or did I get it wrong?

Ah, you are correct! Haute Route has it mis-labeled on their route profile, so I made the same mistake. Fixed above!

Same here. Completed workout # 1 but didn’t get a jersey. I’m opening a support case so we’ll see what they say.

Same here too! Keep us posted.

Yeah, me too! Have you heard anything about how to get?

Zwift Support responded on Friday and said that there was a glitch that caused people to not get credited for the Haute Route workout kit. They said they’re “working on crediting this kit manually to participating Zwifters” and to allow some time for them to correct the issue. I still haven’t received it as of today, but I’m doing workout # 2 tomorrow, so we’ll see if it is fixed by then.